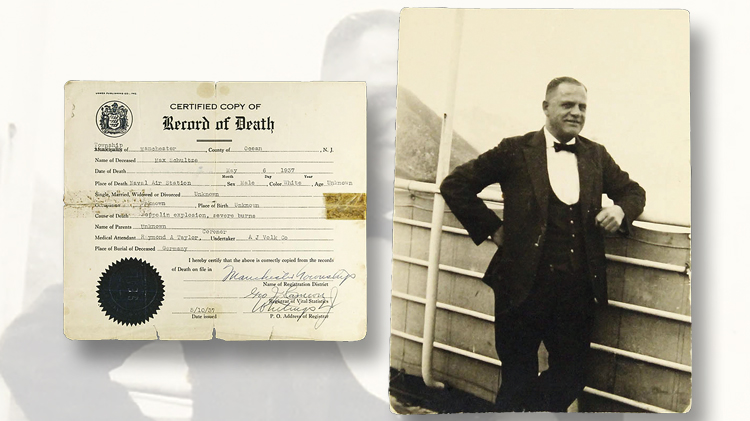 Also in the Kelleher sale were several pieces of Hindenburg memorabilia: a photograph and death certificate of the zeppelin’s steward, Max Schulze. The “museum-class” lot sold for $2,242. 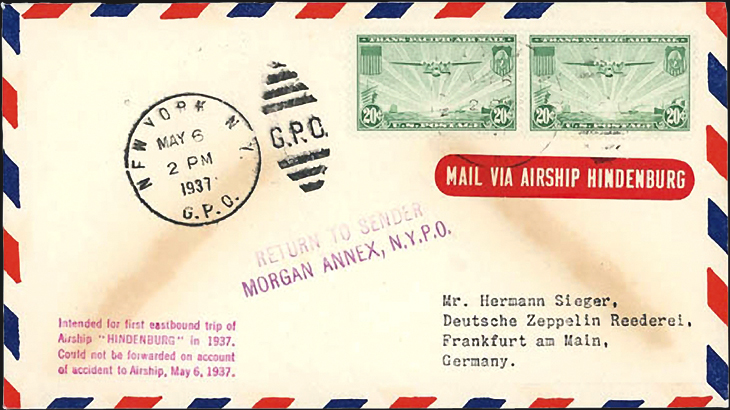 A cover that was to have been carried on the return flight of the Hindenburg from the United States to Germany in May 1937, endorsed with a bright red “Mail via airship Hindenburg,” and returned to sender after the airship’s disastrous end, sold for $236 at the Daniel F. Kelleher auction. 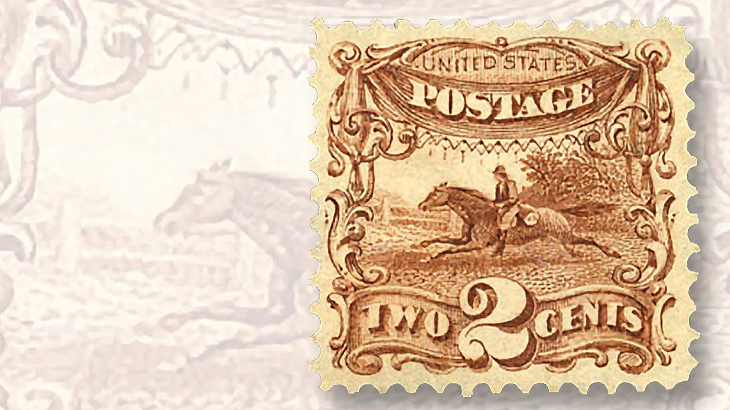 Daniel F. Kelleher offered varieties of the 1869 Pictorial series without grills in its Aug. 30-Sept. 1 sale. This ungrilled 2¢ Post Horse and Rider with very-fine-to-extremely-fine centering sold for $9,440. 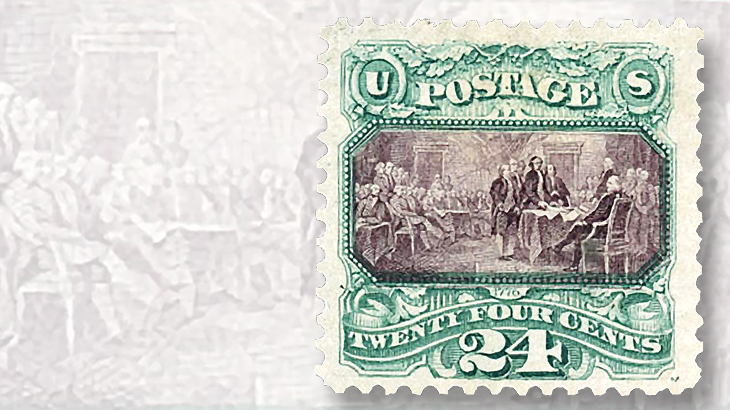 The Kelleher auction featured this ungrilled example of the 24¢ Declaration of Independence stamp from the 1869 Pictorial series that sold for $6,785.
Previous
Next

The firm of Daniel F. Kelleher held an auction of United States and worldwide material from Aug. 30 to Sept. 1 at their offices in Danbury, Conn. The sale was previewed on the front page of Linn’s issue of Aug. 29.

Among the classic U.S. issues were a couple of varieties from the 1869 Pictorial series that lack the usual grills.

Grills were experimental, waffle-like impressions of various sizes, pressed into U.S. stamps during the production process, as part of an effort to combat the fraudulent cleaning and reuse of stamps. The idea was that the grill broke the paper fibers and allowed the ink of the cancellation to seep into the stamp paper more thoroughly, making cleaning impossible.

The experiment lasted from 1867 to 1870. Coincidentally, there was a new issue of stamps during this period that for the first time included pictorial designs alongside the traditional portraits.

The so-called 1869 Pictorials all were issued with grills, with the exception of only a few examples of some denominations, which lack them. These are extremely scarce, and not to be confused with the 1875 reissue of the Pictorials, which lacked grills but were printed on hard, white paper.

A nice example of the 2¢ Post Horse and Rider without grill (Scott 113b), with lightly-hinged original gum, very-fine-to-extremely-fine centering and “tantalizing” color, sold for $9,440, including the 18 percent buyer’s premium charged by Kelleher on all lots.

The stamp was accompanied by two Philatelic Foundation certificates, one from 1985 and one issued this year. Experts often recommend recertifying stamps with older certificates, because philatelic knowledge and opinions, not to mention forensic technology, tend to evolve over time.

An example of the 24¢ Declaration of Independence stamp without grill (Scott 120a), boasting nice margins, fresh colors and original gum with a hinge remnant, and accompanied by a 1998 Philatelic Foundation certificate, sold for $6,785.

Zeppelins always have been a source of fascination for philatelists. The United States and many other countries issued stamps in the 1930s depicting the German-built dirigible airships, but even more intriguing is the postal history relating to the various worldwide zeppelin flights. These recall the romance of early airmail, the bygone leisure and luxury of this form of travel, and of course the horror with which the zeppelin era suddenly came to an end.

Routine zeppelin flight covers are quite common, and can be had for as little as $15 or $20. Some collectors try to assemble as many different flights as possible, while others seek out uncommon origins or destinations. Covers bearing various zeppelin stamps can go for a few hundred dollars, but are by no means rare.

The promise of this graceful form of flight crashed and burned, literally, on the night of May 6, 1937, when the airship Hindenburg burst into flame in Lakehurst, N.J., at the conclusion of one of its trans-Atlantic flights. Thirty-six people died.

The Kelleher sale included a cover that was to have been carried on the airship’s return flight to Germany. Endorsed with a bright red “Mail via airship Hindenburg” beneath a pair of 20¢ China Clipper airmail stamps (Scott C21), the cover was postmarked in New York at 2 p.m. on the fateful afternoon.

It was addressed to well-known German stamp dealer Hermann Sieger, care of the Deutsche Zeppelin-Reederei (German Zeppelin Transport Co.). Sieger, who served as a philatelic adviser to the firm, published an array of philatelic material including an authoritative catalog of all the commercial zeppelin flights. His son, Hermann W. Sieger, later followed him into the stamp business.

Two violet auxiliary handstamps indicate that this piece of mail, which was never put on board the doomed dirigible, was returned to its sender after the crash. It sold for $236.

Another lot in the sale contained a far more poignant collection of memorabilia from the Hindenburg tragedy: the original death certificate issued in New Jersey for the Hindenburg steward, Max Schulze, together with photos of Schulze and other items.

Schulze, formerly a steward and bartender on the Hamburg-Amerika shipping line, nursed a lifelong ambition to serve on a zeppelin, but none of the airships until the Hindenburg had a bar.

Schulze, along with 13 passengers and 21 crew members on board, plus one ground crew member, perished in the brief but intense fire. The death certificate gives his cause of death as “Zeppelin explosion, severe burns,” and notes that his remains were repatriated. The lot, described as a “museum-class item,” sold for $2,242.