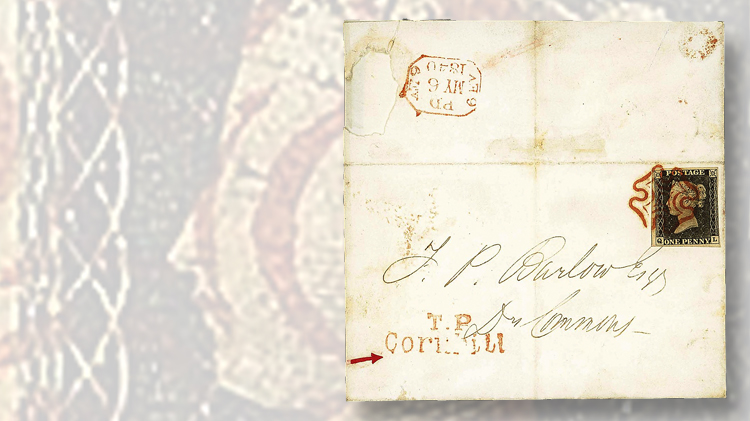 This May 6, 1840, first-day cover of the Penny Black stamp will be offered in the July 25 Spink London sale of Great Britain stamps and postal history.

A May 6, 1840, first-day cover of Great Britain’s famous Penny Black, the world’s first postage stamp, will be offered during the July 25 public auction by Spink and Son in London, England.

The 1-penny black stamp with a vignette of Queen Victoria is described by Spink as being a gray-black shade, slightly worn plate, with good to very large margins though “just touched” at right. The check letters are Q-L, and the stamp is tied by a red Maltese Cross marking.

The red May 6 London “6Ev” octagonal paid datestamp on reverse can be seen in the illustration on this page, which shows the letter opened for display.

The letter is addressed to Doctors Commons (London), with a red “T.P. Cornhill” marking on front.

The cover is listed among the May 6 covers in Mike Jackson’s 1999 survey May Dates. It was once part of the esteemed collection of philatelist Maurice Burrus (1882-1959).

The number of known Penny Black first-day covers has been described as “more than 70.”

The May 6 date on a Penny Black cover is valued at $165,000 in the 2017 Scott Specialized Catalogue of Stamps and Covers 1840-1940, with the figure appearing in italics to indicate such an item can be difficult to value accurately.

The range of material extends chronologically from 16th-century letters of the Corsini correspondence to modern-day material, including color trial proofs from the 1971-76 Machin definitive issue.

Another remarkable Penny Black cover on offer is coincidentally franked with another Q-L lettered stamp, but mailed March 22, 1841.

The cover is one of only two known examples bearing a Penny Black and originating from China.

The letter was written by Clem. A. Edwards on board HMS Rattlesnake on the Canton River. Markings include a black “Ship Letter” handstamp and red Bristol circular datestamp.

These Penny Black covers are from the Charles Hamilton collection of covers, which also includes a turned cover bearing both the Penny Black and the Two-Penny Blue, both struck with red Maltese Cross cancellations.

Items in the auctions are illustrated and described at Spink's website, with online bidding options available.