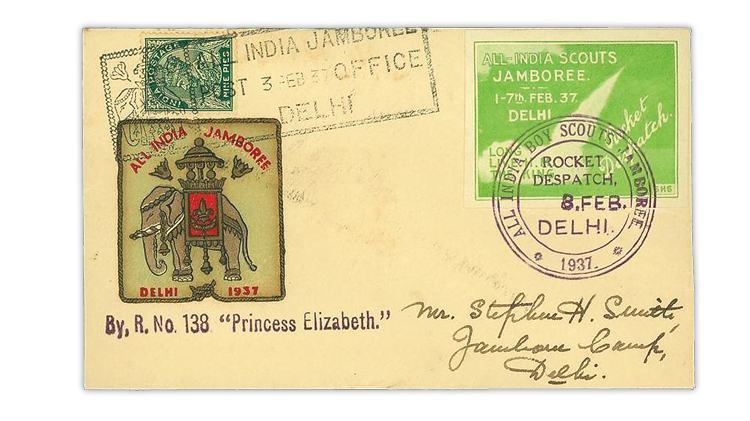 One of the 29 Indian rocket mail covers to cross the auction block during Grosvenor Philatelic Auction’s Jan. 22-23 British Empire and worldwide sale is this cover flown in conjunction with the All India Scouts Jamboree held Feb. 1-7, 1937, in Delhi. The

Grosvenor Philatelic Auctions will offer an extensive array of British Empire and worldwide stamps during a Jan. 22-23 sale at the firm’s gallery in London.

The auction was originally scheduled for Dec. 2-3, 2020, but was postponed due to the COVID-19 pandemic.

Included among the 1,342 lots in the two-day auction is an impressive collection of British postal orders and postal notes formed by Jack Harwood. The 226 lots in the Harwood collection consist mostly of individual orders and notes, with a handful of lots comprising small groups of orders or notes.

Among the group lots of postal orders is a selection of 34 picturing Queen Elizabeth II that are overprinted for use in the British Virgin Islands.

Enthusiasts of rocket mail will want to take a close look at the 29 Indian rocket mail covers that will be up for bids.

One of the more colorful rocket mail covers was sent in conjunction with the All India Scouts Jamboree held Feb. 1-7, 1937, in Delhi.

Affixed to the cover at upper right is a green rocket dispatch label produced for the jamboree. The label shows the dates of the jamboree and reads “Long Live H. M. [His Majesty] The King” at lower left.

A decorative cachet at left features an elephant with an ornate howdah (carriage) on its back. Below the cachet is a purple handstamp stating that the cover was carried “By R. [Rocket] No. 138 ‘Princess Elizabeth.’ ”

The auction catalog for the Jan. 22-23 British Empire and worldwide sale is available for viewing and download on the Grosvenor website. For more information write to Grosvenor Philatelic Auctions, 399-401 Strand, London WC2R 0LT, England.