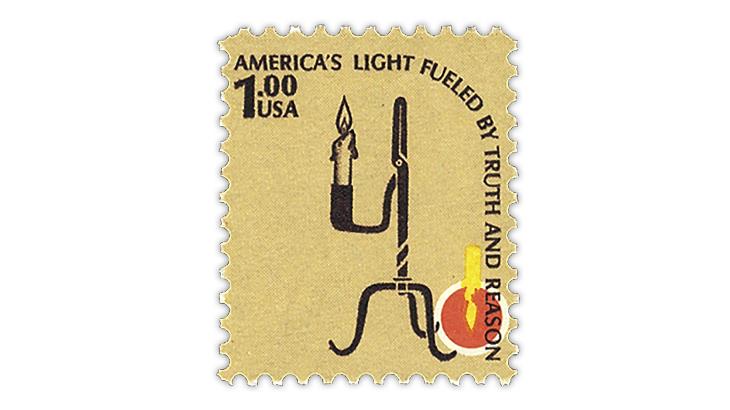 A well-known modern United States error, the 1979 CIA Invert, will be up for bids during Cherrystone Philatelic Auctioneers’ Dec. 7-8 sale of U.S. and worldwide stamps and postal history. This error of the $1 Rush Lamp and Candle Holder has the engraved b 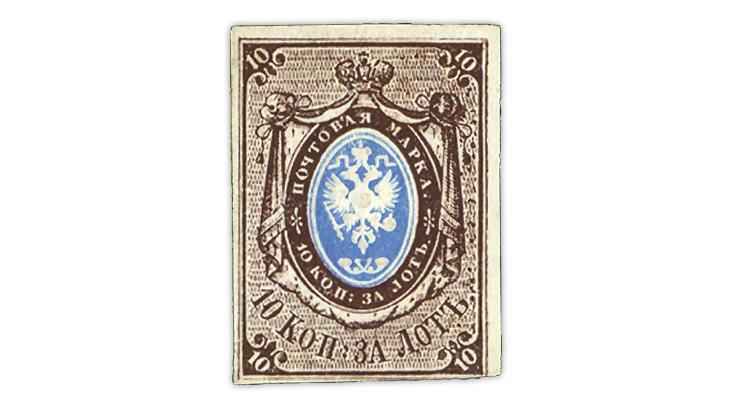 This unused Russia 1857 10-kopeck brown and blue Coat of Arms with part original gum will be up for bids in the Dec. 7-8 Cherrystone auction. The stamp likely originated on a cover and was not canceled, according to Cherrystone. Unused examples of Russia
Previous
Next

Scarce United States stamps of the 19th and 20th centuries and select stamps and postal history from around the world are among the more than 1,500 lots that Cherrystone Philatelic Auctioneers will offer during a sale to be held Dec. 7-8 at its headquarters in Teaneck, N.J.

An overview of the auction, which opens with 410 lots of U.S., Confederate States and possessions, is presented on the Cherrystone website.

“European countries are well represented, with a good showing of Great Britain & British Commonwealth. South America is highlighted by classic Colombia,” according to Cherrystone.

Collectors of Poland will be pleased to see the award-winning Ray Koczarski collection cross the auction block.

U.S. definitive and commemorative issues of the 19th century and early 20th century are well represented, beginning with the 1847 issue and continuing through 1979.

One of the more notable U.S. offerings is a mint, never-hinged 1979 $1 Rush Lamp and Candle Holder with the engraved brown inverted (Scott 1610c), popularly known as the CIA Invert because a single pane of 100 of the error was discovered and purchased at the McLean, Va., post office by a CIA employee.

According to Cherrystone, the employee “teamed up with some colleagues to purchase the pane from a post office.”

“Saving a copy each, the group later sold the bulk of the sheet to a prominent stamp dealer. News of the error reached CIA officials who sought to claim ownership and US Postal authorities who tried to recover the stamps. Official queries, threats, and even job losses followed the group until the sale of the pane was ruled legal.”

Of the original pane of 100, 93 examples found their way into collector hands.

Cherrystone is offering this CIA Invert with an opening bid of $14,000. Accompanying the error stamp is a 2014 Philatelic Foundation graded extra fine-90 certificate.

A mint CIA Invert in the grade of very fine-80 is valued at $17,000 in the Scott Specialized Catalogue of United States Stamps and Covers. The value is in italics to indicate that limited market data is available to establish a value.

A key stamp from the Poland offerings is an unused (hinge remnant present) 1919 10-korona deep violet (Scott 55) from the Cracow issues. The “POCZTA POKSKA” overprint is applied on an Austrian 10-krone Coat of Arms (163) from the 1916-18 regular issue.

Cherrystone notes that only 440 examples of this scarce stamp were printed. The stamp up for bids has an overall fresh appearance and is centered to the right.

In response to a query from Linn’s Stamp News, Josh Buchsbayew of Cherrystone confirmed that this particular stamp is not from the Koczarski collection.

The stamp is signed on the back by A. Taipale, Philatelia Krakow and Stanley Kronenberg. On his 1993 expertizing certificate for the stamp, Kronenberg determined it to be “authentic on the basis of details, measurements, printing technique, and ink of its overprint.”

Those who fancy Scott No. 1s of the world will have a chance to bid on a handsome unused example of Russia’s first regular issue, the 1857 10-kopeck brown and blue Coat of Arms.

Cherrystone points out that the stamp has part original gum, which makes it notably rare. A footnote in the Scott Classic Specialized catalog provides added context:

“Genuine unused examples of [Russia] No. 1 are exceedingly rare. Most of those offered are used with pen cancellation removed. The unused value is for an example without gum. The very few known stamps with original gum sell for much more.”

A no-gum example of the 10k brown and blue Coat of Arms is valued at $62,500 in the Scott Classic Specialized catalog.

In its description, Cherrystone explains that the stamp’s rich colors are indicative of a late printing of the first issue and points out the intact embossing on the back.

The stamp likely originated on a cover and was not canceled. It was subsequently lifted from the cover with a substantial part of the white original gum preserved, according to Cherrystone.

Cherrystone quotes a 1991 Mikulski certificate included with the stamp as saying, in translation from the German, “unused example of this stamp is a world and Russian rarity, only a few known, with part original gum, very nice colors, good embossing of the Eagle.”

More than 130 large lots and collections will conclude the sale on Dec. 8.

One of the collections of France is a lovely array of more than 165 perforated and imperforate French Paintings stamps issued from 1961 to 1999, along with 174 imperforate deluxe sheets of these attractive stamps.

Cherrystone references a Yvert and Tellier catalog value exceeding €35,000 (approximately $40,460 in early November) for this collection and lists it with an opening bid of $5,750.

The catalog for the Dec. 7-8 U.S. and worldwide sale can be viewed and is available for download on the Cherrystone website, with online bidding options available. Information also is available from Cherrystone Philatelic Auctioneers, 300 Frank W. Burr Blvd., Second Floor, Box 35, Teaneck, NJ 07666.