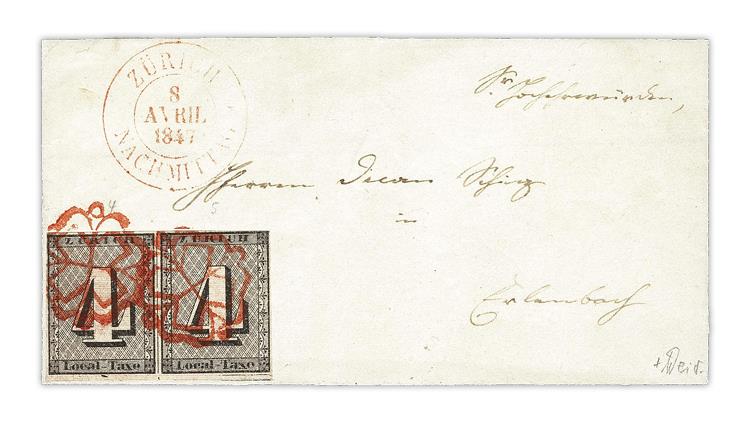 The November Corinphila auction series in Zurich, Switzerland, features part 3 of the Erivan collection, which comprises classic issues from Switzerland. A highlight is an 1847 folded letter franked with a pair of the Zurich 1846 4-rappen black on paper with red horizontal lines. Two clear strikes of a red Zurich rosette cancel tie both stamps to the cover. 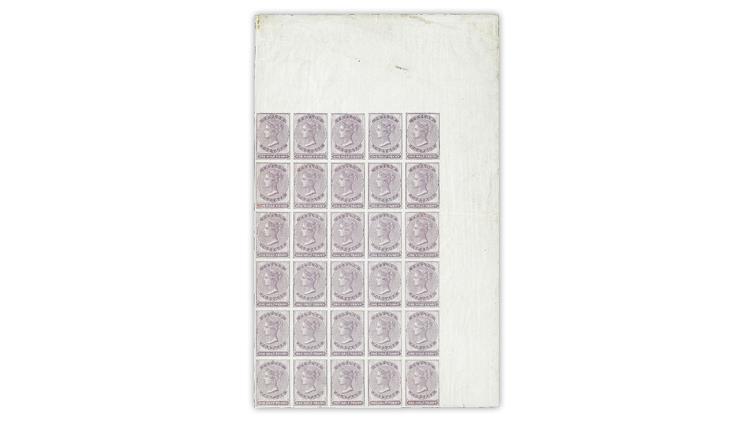 Corinphila’s sale of the Besancon collection of Ceylon and Maldive Islands includes an impressive large multiple: an unused, top right corner sheet margin block of 30 of the imperforate Ceylon 1858 ½-penny lilac Queen Victoria. Corinphila describes this block as a “rare and spectacularly attractive multiple” with “lovely fresh colour.”
Previous
Next

Corinphila, the Swiss philatelic auction house, will offer stamps and postal history from the Besancon, Erivan and other important collections Nov. 19-20 and Nov. 22-26 at its Zurich gallery.

A selection of stamp boxes will also be up for bids on Nov. 26, the final day of the auction series.

One of the highlights of the Switzerland offerings from the Erivan collection is an April 8, 1847, folded letter franked with a pair of the Zurich 1846 4-rappen black printed on paper with red horizontal lines (Switzerland Scott 1L3). Two clear strikes of a red Zurich rosette cancel tie both stamps to the cover.

Corinphila says that the stamps are type IV and V and that this cover is the “earlier of the two letters from the Decan Schinz correspondence.”

The Scott Classic Specialized Catalogue of Stamps and Covers 1840-1940 notes that there are five varieties of the Zurich 1843 and 1846 issues.

Corinphila describes the cover as “a showpiece of Zurich and Swiss postal history, certainly the most beautiful of all existing paired frankings from Zurich.” The firm also provides a detailed summary of the cover’s extensive provenance and the numerous auctions in which it has appeared.

Corinphila is offering this renowned item of early Swiss postal history with an opening bid of 200,000 Swiss francs, roughly $217,000 in late October.

A single example of the 1846 4r black on cover is valued at $55,000 in the Scott Classic Specialized catalog. The value is italicized to indicate an item that can be difficult to value accurately because of limited market data.

An eye-catching item in Corinphila’s sale of part 4 of the Brian Moorhouse estate is a registered cover mailed July 29, 1909, from La Paz, Bolivia, to Hamburg, Germany, that features a colorful three-stamp franking from the 1909 set commemorating the centennial of the revolution of July 1809: 5-centavo blue and black Coat of Arms (Scott 78), 10c green and black Pedro Domingo Murillo (79) and 20c Jose Miguel Lanza (80).

The July 29 postmark date indicates that the stamps were used during their second week of issue, Corinphila said.

Markings on the cover include boxed purple registry handstamps of La Paz and Callao, Peru. A backstamp shows the envelope transited through Callao on Aug. 6.

Corinphila is offering this handsome 1909 registered cover from Bolivia with a starting bid of 200fr (approximately $215).

In addition to the normally issued stamps, the Bolivia 1809 Revolution Centennial issue (Scott 79-81) exists imperforate and with the centers inverted. These errors are valued but not listed in the Scott Classic Specialized catalog.

One of the more impressive multiples in the Besancon collection of Ceylon and Maldive Islands is an unused, top right corner sheet margin block of 30 of the imperforate Ceylon 1858 ½-penny lilac Queen Victoria (Scott 14).

The block was part of the famous Mayfair find of rare stamps and sold in a Nov. 9, 1925, Harmers auction in London, according to Corinphila. It was also sold by Spink in London on April 12, 2007.

Corinphila describes this 1858 ½d lilac Queen Victoria block as a “rare and spectacularly attractive multiple” with “lovely fresh colour” and lists it with a minimum bid of 2,500fr (approximately $2,700).

Numerous collections and large lots from around the world will cross the auction block during the final day of the auction series.

A representative example is a 1955-2018 accumulation of mostly mint stamps from Malta, Gibraltar, Cyprus, Channel Islands (Guernsey, Alderney and Jersey) and Isle of Man that Corinphila describes as “a very worthwhile lot in predominantly clean condition.” Most of the value is found in the various Queen Elizabeth II issues, according to Corinphila.

Corinphila is offering this collection of mint issues with an opening bid of 700fr (approximately $760).

Details of these auctions are provided on the Corinphila website, including online listings for the material in all 10 auction catalogs, as well as PDF catalogs that can be individually downloaded. Online bidding options are available.