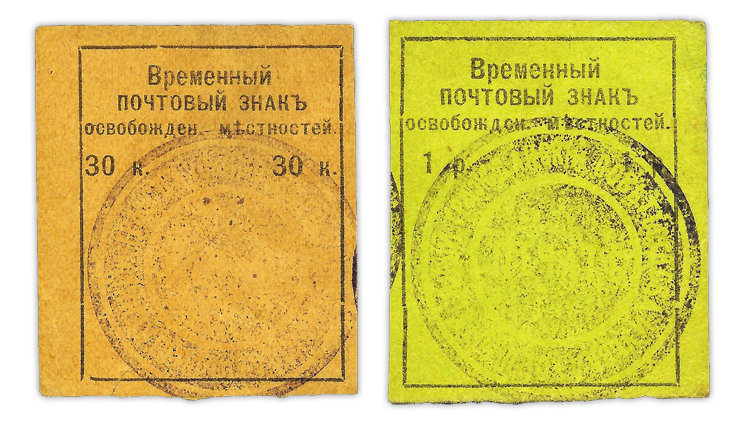 In the Nov. 15-16 Dutch Country auction, these two provisional stamps issued in 1919 for use in Gdov, Russia, will be offered. The auction includes United States and worldwide first-day covers, U.S. stamps, Canada and other worldwide.

One unusual offering is a set of two Russian Civil War-era provisional stamps locally produced in 1919 for postage in Gdov, Russia, a town situated near the western border shared with Estonia.

Little is known about these stamps, though they are noted in the Estonia Philately and Postal History Handbook by Vambola Hurt and Elmar Ojaste and have been described in a few philatelic articles.

A 1934 Rossica article (in Russian) explains that as the Army of the North sought to occupy Gdov in 1919, the Bolsheviks retreated from the town, taking with them all of the stamps in the Gdov post office.

These provisional stamps were printed locally to fulfill the pressing postal need, according to research. The 30-kopeck stamp is printed on orange paper, and the 1-ruble stamp is printed on green paper. A black control mark is struck in a designated blank space on each stamp, and text across the top of the simple design reads “Temporary Postage Stamp of the Liberated Areas.”

The number of stamps printed is uncertain, but six sets of two were accounted for in the 1934 article. The census did not include the set in the upcoming auction, advancing the total recorded to seven sets.

When issued, the stamps were available for only a few days, according to Dutch Country. None are known used.

The lots in the upcoming auction can be viewed on the Dutch Country website, and at Stamp Auction Network, where online bidding is available.