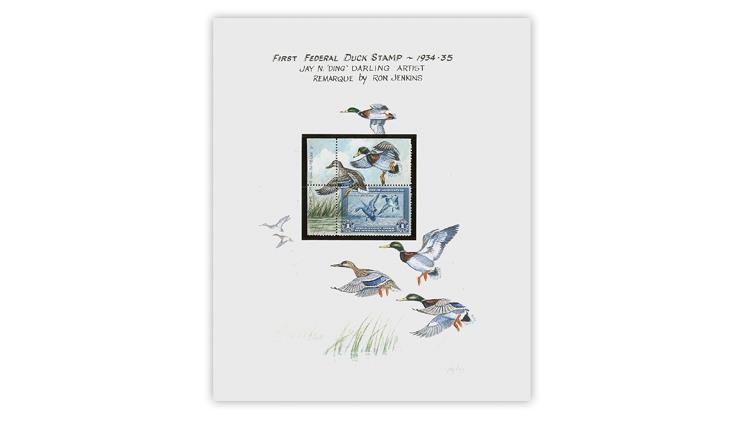 A highlight of the Richie Prager collection of United States federal and state duck stamps to be sold June 14 by Robert A. Siegel Auction Galleries is a beautiful grouping of 82 corner margin singles of the federal duck stamps issued from 1934 to 2015 (Scott RW1-RW82) with remarques hand- drawn by wildlife artist Ron Jenkins. Shown is Jenkins’ remarque for the 1934 $1 Mallards stamp featuring artwork by Jay N. “Ding” Darling. The remarque is mounted on a page with additional scenes by Jenkins. 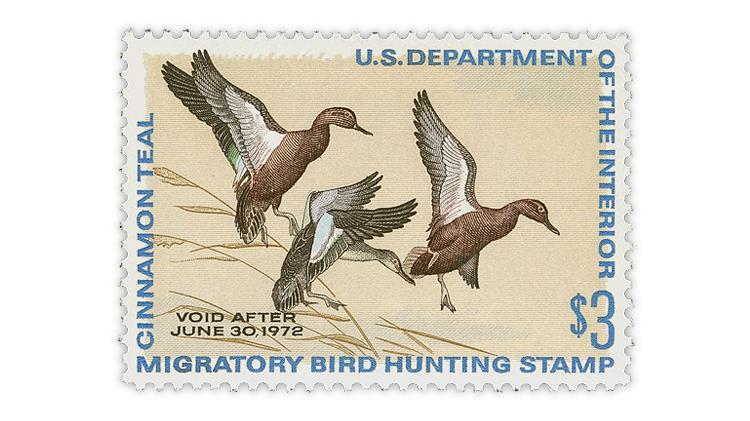 Siegel’s auction of the Prager collection includes this 1971 $3 Cinnamon Teal federal duck stamp with a 2005 graded gem 100 certificate from Professional Stamp Experts. Siegel describes the stamp as having “mathematically perfect margins.”
Previous
Next

(Linn’s Stamp News reported this significant contribution to the museum in the April 25 issue.)

Prager’s legacy as a champion and devotee of duck stamps will be further cemented when Robert A. Siegel Auction Galleries in New York City offers his outstanding collection of U.S. federal and state hunting permit stamps in a single sale to be held June 14 at 1:30 p.m.

In the introduction to the auction catalog, Siegel traces Prager’s love of duck stamps back to the beginning, when he “was born into a household of conservationists well before the current social awareness.”

It also helped that Prager’s mother was a stamp collector who ignited his passion for stamps when he was a young boy. “Her best advice was to focus on a stamp series that interested him,” Siegel said.

Prager bought his first duck stamp, a 1976 $3 Canada Geese (Scott RW43), so he could hunt waterfowl in southern Rhode Island, according to Siegel.

Among the myriad highlights of the collection that Prager carefully built during the past 45 years is a gorgeous assemblage of 82 corner margin singles of the federal duck stamps issued from 1934 to 2015 (Scott RW1-RW82) with remarques that will be offered as a single lot.

Each stamp features a remarque drawn by Ron Jenkins, the artist of the 1965 $3 Canvasback Drakes stamp (Scott RW32). Each stamp is protected in a mount affixed to a page featuring additional artwork and inscriptions by Jenkins. All 82 stamps and their accompanying pages are signed by Jenkins.

The collection is protected in two deluxe leather Godden albums with accompanying slipcases, according to Siegel.

“There is also a frontispiece with a name and ‘I hope you enjoy the remarques on your pages. It was fun for me when I have the chance to work on so many different subjects. Thanks for the opportunity, I truly enjoyed it.’ and signed ‘Ron Jenkins, Artist RW32,’” Siegel said.

One of the gem 100 stamps offered as a single lot is a 1971 $3 Cinnamon Teal that Siegel describes as having “mathematically perfect margins” and “brilliant colors.”

Included with the stamp is a 2005 Professional Stamp Experts certificate attesting to the stamp’s impressive grade.

Federal duck stamps in the grade of gem 100 are not valued in the Scott Stamp Values U.S. Specialized by Grade, but the catalog does value a superb 98 example of Scott RW38 in mint, never-hinged condition at $195.

Siegel lists this gem 100 1971 $3 Cinnamon Teal at $42. A mint, never-hinged example in the grade of very fine 80 is valued at $42.50 in the Scott Specialized Catalogue of United States Stamps and Covers.

Although Prager is selling his collection, his advocacy for wildlife conservation and awareness will continue.

“The proceeds of the auction are partially earmarked to help with the education mission as well as Richie’s determination to treasure hunt for original winning artwork not yet with the Bruce Museum,” Siegel said.