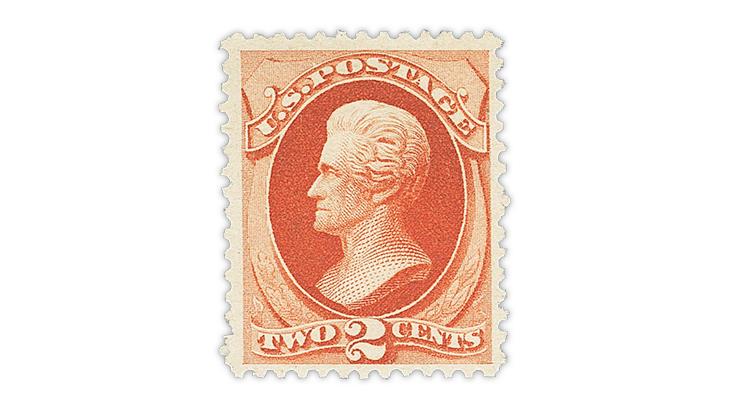 Among the rarities in Robert A. Siegel Auction Galleries’ May 19-20 sale of choice United States stamps is this unused 2¢ scarlet vermilion Andrew Jackson stamp from the 1880 American Bank Note Co special printing of the 1879 definitive series. Only 19 ex 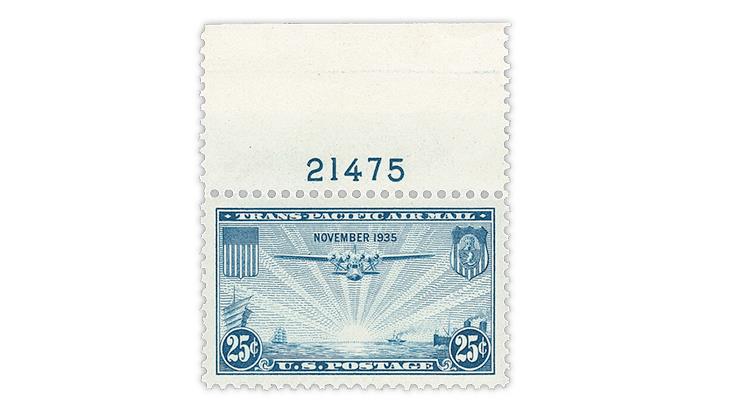 The May 19-20 Siegel sale features eight stamps that have received a gem 100J grade. One of them is this mint, never-hinged U.S. 1935 25¢ Trans-Pacific airmail with top margin selvage bearing plate No. 21475. Siegel describes the stamp as “a truly excepti 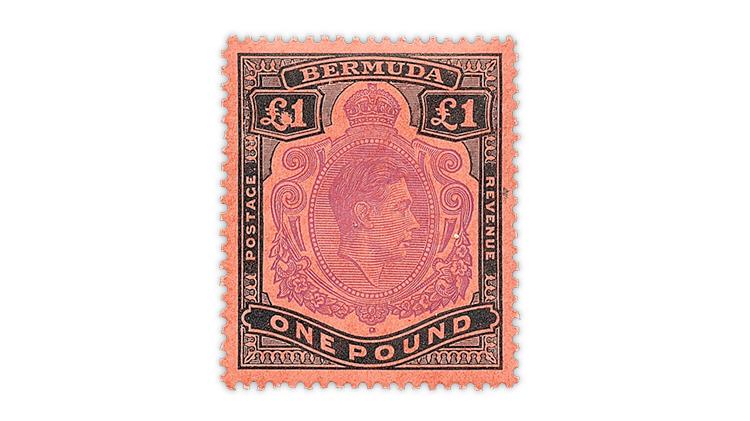 Siegel International will offer the Steve Pacetti collection of Bermuda key plate issues during its May 25-27 auction of select worldwide stamps and postal history. A highlight from the collection is a mint, never-hinged 1951 £1 violet and black King Geor 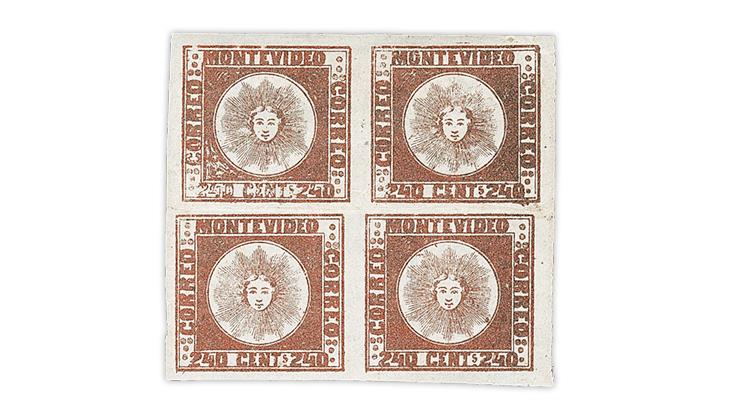 This unused block of four of Uruguay’s 1858 240-centavo brown red stamp, the only recorded block of this issue, will be up for bids during the May 25-27 Siegel International sale. The block is from the Gordon N. John collection of the 1858 first issue of
Previous
Next

Robert A. Siegel Auction Galleries is offering a choice selection of United States stamps May 19-20 at its gallery in New York City. Many of these stamps are from the collection formed by Kenneth Abramowitz.

On May 25-27, Siegel International, in association with Charles F. Shreve, will present more than 1,100 lots of desirable worldwide stamps and postal history, along with an extensive array of collections and accumulations. This sale will also be conducted at the Siegel headquarters in New York City.

The May 19-20 auction includes more than 550 lots, beginning with impressive examples of the nation’s first postage stamps: the 1847 5¢ Benjamin Franklin (Scott 1) and 10¢ George Washington (2).

The unused 1847 10¢ Washington up for bids possesses original gum, large margins at left and bottom, and “intense shade and impression,” according to Siegel.

Siegel also notes that the stamp has “light pencil notations” on the gum at bottom that are not mentioned on the accompanying 2021 Philatelic Foundation certificate.

Siegel estimates this 1847 10¢ Washington at the Scott Specialized Catalogue of United States Stamps and Covers value of $35,000.

Stamps from all 19th-century and early 20th-century definitive and commemorative series are well represented in the sale.

One of the standout rarities is an unused 2¢ scarlet vermilion Andrew Jackson (Scott 203) from the 1880 American Bank Note Co. special printing of the 1879 definitive series.

According to Siegel, of the 20 known examples of Scott 203, only 19 are available to collectors because one is in the Miller collection owned by the New York Public Library.

“Of the 19 available to collectors, six have faults or have not been examined in recent years to determine condition. Of the 14 remaining sound copies, we see only two others which rival the stamp offered here for centering and margins,” Siegel said.

This 2¢ scarlet vermilion Jackson from the 1880 special printing has an impressive provenance, having graced the collections of Gleysteen, Zoellner and Gorham. Four expertizing certificates accompany the stamp: one from the American Philatelic Expertizing Service issued in 1943 and three issued by the Philatelic Foundation in 1972, 1998 and 2013.

Siegel estimates this rarity at the Scott U.S. Specialized catalog value of $100,000.

Collectors in pursuit of graded stamps will find almost 200 scattered throughout the catalog for the May 19-20 sale.

To assist bidders Siegel lists all the graded stamps in an index in the back of the catalog. The stamps are listed in descending grade order, beginning with eight stamps graded gem 100J. The “J” designation indicates a stamp with jumbo margins.

One of the eight stamps graded gem 100J stamps that will cross the Siegel auction block is a mint, never-hinged 1935 25¢ Trans-Pacific airmail (Scott C20) with top margin selvage bearing plate No. 21475.

As indicated by the grade, this stamp has outstanding centering and unusually large margins. Siegel describes the stamp as an “Extremely Fine Gem, a truly exceptional example of this issue which is without peer.”

Professional Stamp Experts (PSE) graded the stamp gem 100J on its certificate issued 2020. Siegel notes that 23 examples of Scott C20 have been graded gem 100 by PSE. The 25¢ Trans-Pacific airmail stamp in the Siegel auction is the first to receive the gem 100J grade from PSE.

For comparison, a superb 98 example of Scott C20 in mint, never-hinged condition is valued at $180 in the Scott Stamp Values section in the Scott U.S. Specialized catalog. The gem 100J stamp in the Siegel sale will likely sell for much more.

Among the more unusual Great Britain items is a left margin block of four of the 1877 4-penny turquoise blue Queen Victoria trial color proof. Reading upward in the left margin of the block is “£1 per Sheet of Six.”

The block is from plate 15. The top two stamps are lightly hinged, while the bottom two are mint, never-hinged.

Siegel International is offering this attractive Queen Victoria trial color proof multiple with an estimate of $300 to $400.

This distinctive plate flaw appears as an irregular splotch between the pound symbol and the “1” in the left value tablet.

“This so-called ‘white island flaw’ variety is the rarest of all the King George VI One Pound Key Plates, as it only occurred on part of the 1951 printing. It is also one of the most desirable, as the plate flaw is one of the most easily discernible,” according to Siegel International.

This impressive variety is listed in the auction catalog with an estimate of $1,500 to $2,000.

One of the most important multiples in the John collection of the 1858 first issue of Uruguay is an unused block of four of the 240-centavo brown red stamp (Scott 6b, listed as brick red), which Siegel International describes as the only recorded block of this stamp.

In its lot description, Siegel International provides a capsule review of the stamp’s origins: “The normal color of the 240c is Vermilion (in dull, bright or deep shades), but the stamps were also printed in a distinctive Brown Red (listed in Scott as Brick Red), which is an entirely different ink mixture. It is reported that one multiple of the Brown Red was divided and sold by Jean-Baptiste Moens, a 19th century Belgian stamp dealer, but the existence of duplicate positions … prove that at least two different multiples reached collectors.”

This unique multiple of the 1858 240c brown red stamp is backstamped by Soto Hermanos and signed by Fausto Diaz, according to Siegel International. The block is offered with an estimate of $30,000 to $40,000.

Separate catalogs have been prepared for Siegel’s May 19-20 U.S. and May 25-27 Siegel International sales. Full details of the auctions, including downloadable versions of the catalogs and online bidding options, are available on the Siegel website.