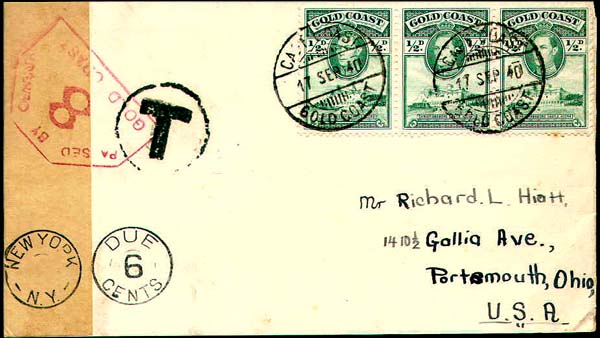 Censored mail can be found from every section of the globe. This WWII censored cover is from Gold Coast. 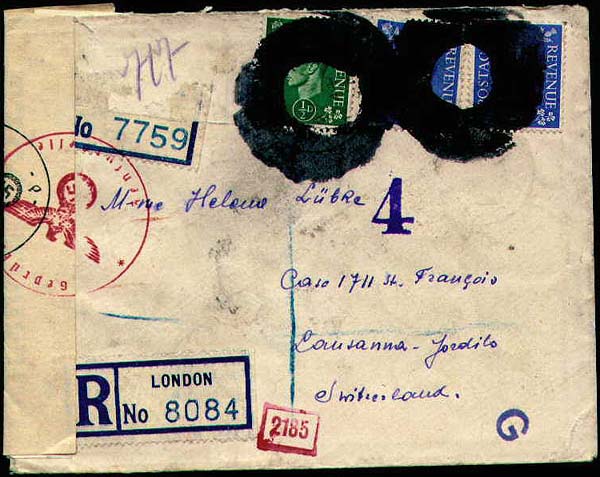 A cover sent across belligerent lines during World War II via a drop box in neutral Switzerland. 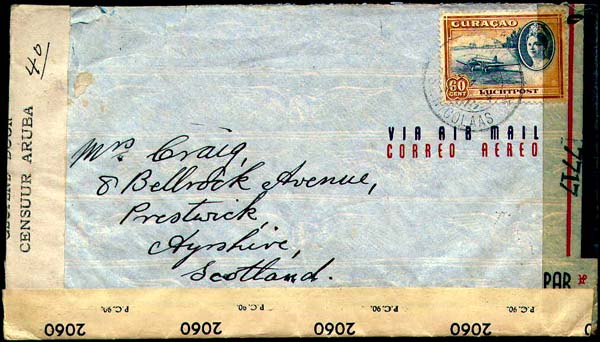 This World War II triple-censored cover from Curacao to Prestwick, Scotland, was opened and resealed by censors in Aruba, the United States and Great Britain. 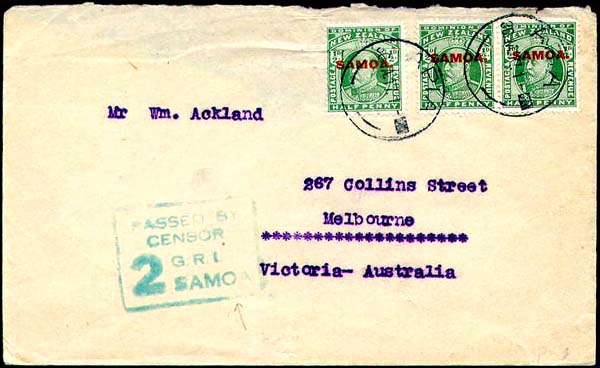 This World War I cover from Samoa indicates that its contents were examined and passed by censor 2. 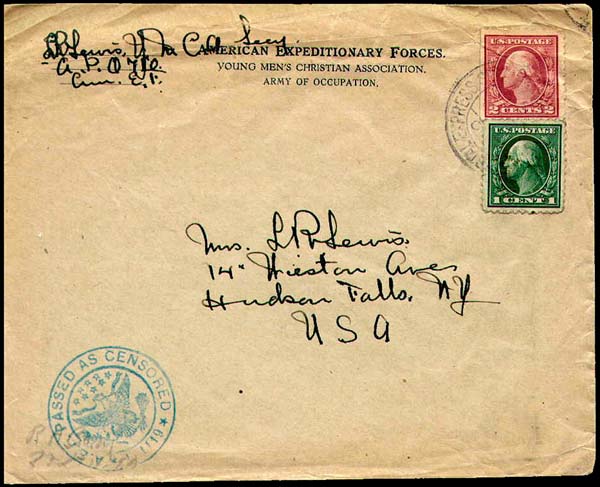 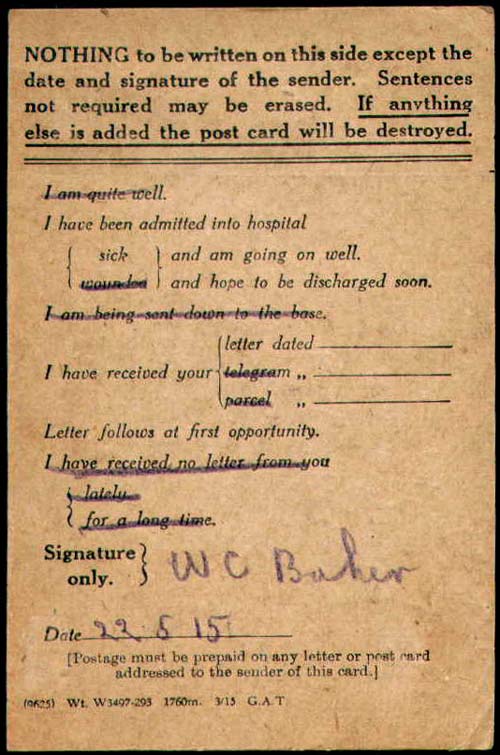 Message side of a British World War I Field Service postcard. 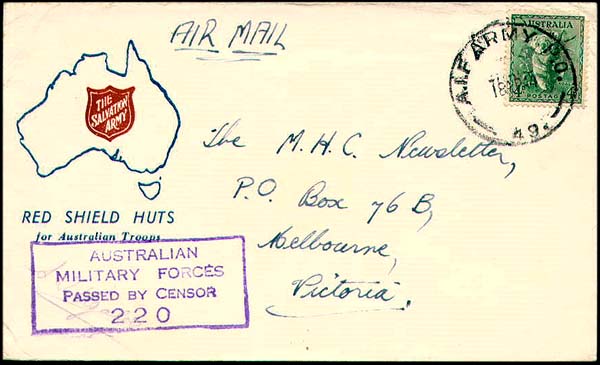 During times of war or civil strife, mail is often opened and read by postal, government or military authorities.

Censorship is not limited to mail sent to and from military personnel. Civilian mail may be censored as well, according to policies established by individual countries. The goal of censorship is the same for both military and civilian censors: to protect military secrets, dates of sailings of vessels, troop movements and even weather conditions.If it is found to contain information of a sensitive nature, that information is deleted from the missive. Mail that has passed through a censor is usually marked, resealed and sent onward to the recipient.

It is the censor's job to see that any information that could be useful if it fell into the hands of the enemy does not do so.

Some censors blackened passages from letters that contained sensitive information. Others cut out and discarded the parts of the letter that did not pass censorship.

Military mail was usually censored by officers who would review the letters and then mark them with a handstamp.

Some countries required a censor to sign the censorship marking. Other countries issued numbered handstamps to military censors.

Censoring mail was time-consuming. The process caused many delays in the mail that did not contribute to maintaining high morale of the troops.

During World War I, Great Britain developed honor pledge envelopes that were self-censored.

The sender signed a pledge saying the letter contained "nothing but private and family material." Letters in honor pledge envelopes might still be censored by military or civil censors somewhere in the mailstream.

Great Britain tried other methods to speed communications for its service personnel. The Field Service postcard illustrated in Figure 3 was sent during World War I.

The message side contained a set of standard messages that the sender could tick off. This was an impersonal way to send a message, but it did avoid the delay created by censorship.

In order to save valuable cargo space on planes and ships, some military mail was microfilmed. A roll of microfilm could contain up to 20,000 letters. Once the microfilm was sent to the receiving station, it was photographically reproduced and mailed to the addressee.

Called V-Mail in the United States, it was also inspected by censors.

Military censors used many different types of devices to indicate that a letter had been censored. These vary widely depending upon location, branch of service, date of use and country of origin, offering endless possibilities for forming an interesting collection.

Civilian censored mail is equally varied and fascinating. Mail that was opened by postal censors was resealed using either gummed paper or cellophane strips or seals.

Often the censor would be required to mark the mail with an identifying number, such as that on the WWI cover from the New Zealand-occupied German colony of Samoa, shown in Figure 5. This cover was sent to Australia.

Some mail was opened by censors in two or more countries. Such mail received many colorful markings. Illustrated in Figure 6 is a cover sent from Curacao to Prestwick, Scotland, in 1944.

The letter was opened and resealed in Aruba, the United States and Great Britain, and it bears sealing tapes from each of those incursions by censors.

Mail could be exchanged between belligerent nations through the use of message schemes and drop boxes.

Figure 7 shows a cover sent from Britain to Switzerland. The recipient was Helena Lubke, a Polish woman living in Lausanne. On her own initiative and with her own money, she provided transmailing services to Poles in occupied and Allied countries who were interred in prisoner-of-war and refugee camps.

The cover illustrated bears many censorship markings from belligerents on both sides of the war.

The British postmark was obliterated so that the place of mailing could not be identified. The town registration label was defaced and replaced with a London label. A German censorship strip was applied over the British label, and several other German censor markings were added.

The Red Cross ran the Red Cross Message Scheme from its headquarters in Switzerland for the exchange of mail between persons living on opposing sides of the war. The word "scheme" has different connotations in British English than it does in American English.

The two World Wars assured that most of the countries in the world would use some form of censorship. Figure 8 shows just one example from Gold Coast, but others from virtually every section of the globe exist.

Two societies are of interest to collectors who want to take on the challenge of collecting censored mail.

Multitudes of excellent reference works exist on various aspects of both military and civil censorship. For an overview of World War II censorship, a good starting place isCivil and Military Censorship During World War II by H.F. Stich, W. Stich and J. Specht.

You will be surprised at how engrossing it can be.