The 2001 U.S. 34¢ Four Flowers set was issued in coil format on liner paper that was the same size as the stamps. The set was also issued in two different booklets.

The 2001 United States nondenominated (15¢) Woody Wagon stamp was issued in coil format on liner paper that extends beyond the edges of the stamps.

This experimental 25¢ Eagle and Shield stamp was the United States' second attempt at a self-adhesive stamp, 15 years after the 1974 Christmas Dove.

The African nation of Sierra Leone quickly picked up on the revolutionary idea and issued a set of self-adhesive Map stamps in February 1964. 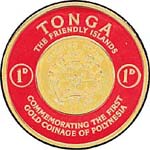 The low-value stamp from the 1963 self-adhesive Coins set from Tonga.
Previous
Next

In February 1964 Sierra Leone issued the world's first self-adhesive stamps. These seven free-form die-cut stamps (Scott 257-63) were issued in honor of the New York World's Fair. They were shaped like a map of Sierra Leone. The low-value stamp, 1p denomination, is shown in Figure 2.

The African nation followed this issue with a strikingly similar one three months later honoring John F. Kennedy. It was more than five years before another country issued self-adhesives.

In April 1969, the archipelago nation of Tonga issued a set of stamps picturing, and in the shape of, a banana. Ostensibly, the self-adhesive stamps were meant to solve the problem of how to store stamps in the islands' tropical climate, which they did quite successfully. But one would suspect that these highly unusual stamps were also issued with a thought to stamp collectors.

Collectors, however, had mixed reactions. After all, what were they to do with these strange stamps? Mint stamps would be difficult to mount. They would obviously have to be kept on their liner paper. And what long-term effect would this self-adhesive gum have on the stamps' condition? Collectors of used stamps were as baffled. Real-life experience quickly showed that these stamps were impossible to soak from paper.

In September 1969, Bhutan issued a set printed by offset lithography (a transfer process) on cloth showing Buddhist prayer banners (Scott 105-05E). Gibraltar was next in 1974 with a set showing mailboxes (Scott 309a), closely followed by the first self-adhesive issue from the United States, then Norfolk Island with a set of four for the Universal Postal Union (181-84).

The 1974 U.S. 10¢ Christmas Dove Weathervane precancel (Scott 1552) is well-known among U.S. collectors for its wealth of problems. The stamp is shown in Figure 3. The stamp became severely discolored after a short time because of the instability of the adhesive.

Used examples could not be soaked off paper because the adhesive did not include a water-soluble layer (as most U.S. self-adhesives do), and the stamp was designed to separate into layers if soaked in water. This fiasco of a stamp issue delayed the next U.S. self-adhesive for many years.

Another U.S. self-adhesive was not seen until 1989, when the experimental (generally successful) 25¢ Eagle and Shield stamp (Scott 2431) was issued in 15 cities. This stamp is shown in Figure 4. Another experimental issue was released the following year picturing a stylized flag (Scott 2475), a so-called plastic stamp. It was available to the public only for a period of six months through 22 First National Bank automatic-teller machines in Seattle. Another experimental plastic stamp followed, as did an experimental stamp picturing the Liberty Torch (2131A).

In 1992, three Eagle and Shield self-sticks were issued nationwide, but the public did not buy them because they sold for a premium above face value. After the premium was removed in late 1992 the stamps began to sell in 1993, as did other new self-sticks issued in 1993. By 1994 the U.S. public was crazy for self-sticks.

Thirty-one years after they began, self-sticks had revolutionized the U.S. mail. During the test-and-retest period in the United States, self-adhesives continued to take hold throughout the world. In 1975 Montserrat issued its first self-adhesives (Scott 322a).

The other large countries started 15 years after the United States made its first attempt. Japan and Canada issued their first self-adhesive stamps in 1989, followed by France, Australia, Poland and others the following year.

Mailers love the self-adhesive stamps, finding them to be more convenient and, presumably, not as unpalatable as the old lick-and-stick stamps that collectors hold so dear. But the self-adhesives left a bad taste in the mouths of many stamp collectors. Even years later, the problems with the first U.S. self-adhesive weighed heavy on the minds of collectors.

How would the adhesive hold up after years of storage? Would it discolor the stamp? Would it damage other stamps stored nearby? Would it soak off an envelope? Various adhesive types have been tried on stamps, in the United States and worldwide, and one problem or another has cropped up with many, primarily degrading adhesives on mint stamps and soaking problems for used stamps.

There are basically two different types of pressure sensitive adhesives, and neither is archivally safe. The first is rubber based. Its use can be traced to a patent issued in 1845. This is the type used on the original Scotch brand cellophane tape. It is also the type that was used on the 1974 U.S. Christmas stamps.

The second type is based on a synthetic polymer acrylic plastic that has been in use in Europe since the 1930s. This is the adhesive used on Scotch brand Magic tape and on U.S. self-adhesive stamps since 1989.

Acrylic-based adhesives do not leech through paper, but they do experience a process known as "cold flow." This is when the gum oozes through openings and around the edges of the adhered surface, adhering then to adjacent surfaces.

As this relates to stamps, the adhesive on mint stamps mounted in albums can ooze around the stamp into the mount or even the album page. And rather than losing its adhesive quality over time as the rubber-based adhesive does, synthetic adhesives adhere more firmly to a surface the longer they are in contact with it.

For collectors of used U.S. stamps, most self-adhesives issued since 1989 have a water-soluble layer between the adhesive and the stamp paper, so that the stamps can be soaked off paper. However, the longer a self-adhesive stamp is left on an envelope, the harder it is to soak off.

Various formats for self-adhesive stamps exist. At first, most were issued in flat panes, convertible booklets (small panes that could be folded into a booklet) or sheets. Later, nonexperimental self-adhesive coils in different formats were issued for the general public. One form has separate stamps on liner paper, with the liner paper visible all around the stamps. The 2001 U.S. Woody Wagon nondenominated (15¢) stamp is in this format. A strip of three is shown in Figure 5.

The most recent development is linerless coils. These stamps have no backing paper and are dispensed much like adhesive tape. The stamps are separated by rouletting, so that they cling together at the edges but can be pulled apart. The U.S. 33¢ Fruit Berries stamps were issued in this format, among other formats.

It was quickly determined that these stamps did not adhere firmly to envelope paper and cancels tended to bleed. Clearly this format will have to be studied and altered before the USPS will issue other stamps this way.

Despite the problems collectors have with self-adhesive stamps, the United States Postal Service, and other postal administrations around the world, seem to have decided that they are worth the trouble.

The 2002 U.S. Stamp Program currently lists 113 stamps that will be issued as self-adhesives this year. The remaining seven stamps will either be issued with traditional water-activated gum, or the adhesive to be used has not yet been announced by the Postal Service. But with what we know at this point, at least 94 percent of the stamp program will be self-adhesive.

The revolution is over. Whether some stamp collectors like it or not, self-adhesive stamps can't be licked.