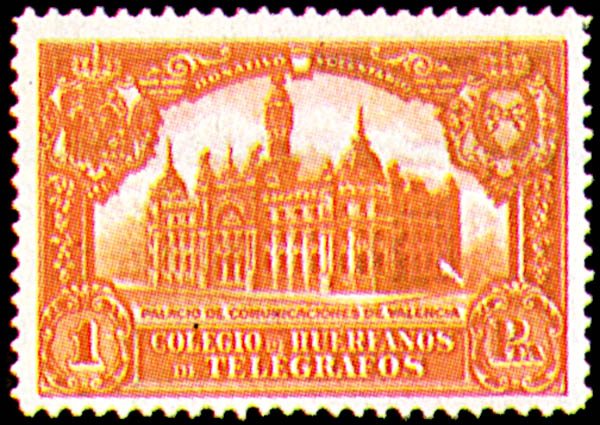 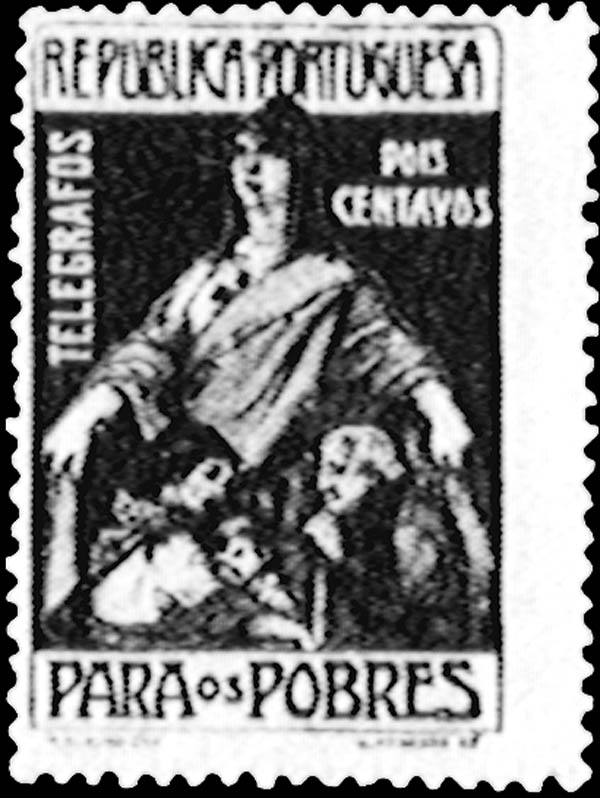 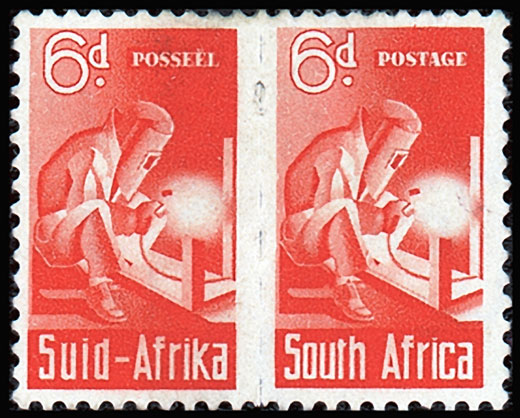 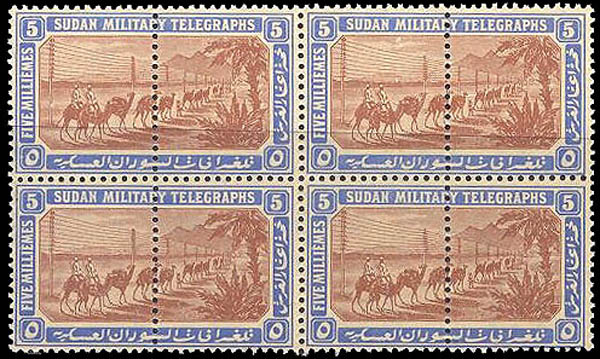 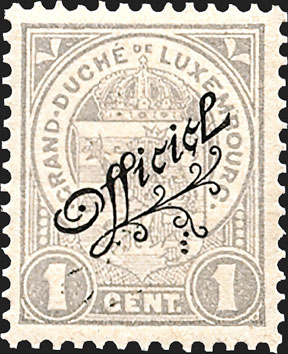 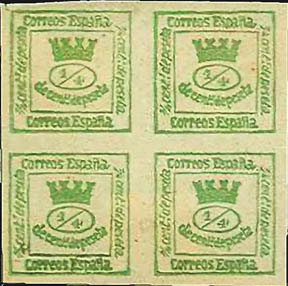 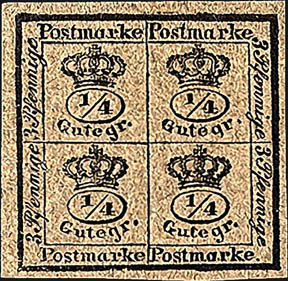 Figure 2. A 1-reis brown Coat of Arms telegraph stamp, Hiscocks Spain No. I.1. 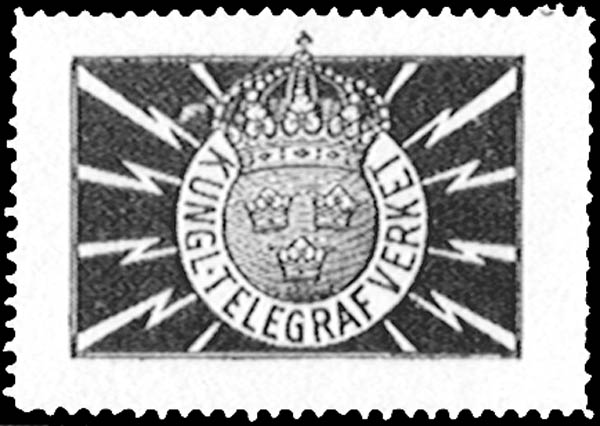 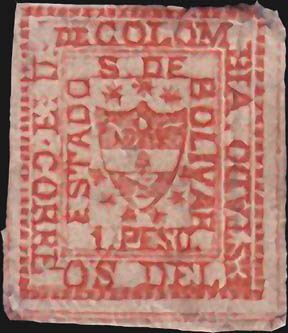 There is a third category of stamps that often seems to get less respect than Rodney Dangerfield: telegraph stamps.

Telegraph stamps are service fee stamps that prepay or show payment or exemption from payment for delivery of a telegraphic message. They are first cousins of postage stamps, which prepay a very similar service: delivery of a message through the postal system. The difference between telegraph and postage stamps is the medium of delivery.

In these days of instant messaging, e-mail, videophones and nearly instantaneous satellite communication with all parts of the world, the idea of communicating by telegraph is perhaps best described as "quaint."

However, it would be difficult to overestimate the impact that the telegraph had on worldwide communications at the time of its introduction.

The telegraph is long-distance communication for sending coded messages by electrical transmission over a wire. The telegraph was invented by Samuel F.B. Morse, who installed a two-mile working telegraph line on the grounds of what is now New York University in 1837. Morse also devised the most commonly used code for telegraphic communications, the Morse code.

In 1843, the first telegraph line open to public use went into operation between Paddington and Slough, England. In 1865, the first successful Atlantic cable linked the United States with Europe, and the world got a whole lot smaller in a hurry.

In many countries, the telegraph system came to be administered by the government, often in conjunction with the postal system.

Initially postage or revenue stamps were used to indicate payment of the government telegraphy fee. Postage and revenue stamps used for telegraph fees can often be distinguished by the cancel.

Over time, many governments began to issue separate telegraph stamps.

Sending a prepaid telegram was quite similar to posting a letter. The telegraph stamp was applied to a telegraph form containing the message to be sent and dropped into a telegraph collection box. Couriers emptied the boxes and took the forms to the servicing telegraph office from which the message was sent.

At the receiving end, messengers delivered the telegram to the recipient.

Telegraph and Telephone Stamps of the World by S.E.R. Hiscocks, published in 1982, is the only general catalog.

The Electric Telegraph Co. of Britain issued prepaid telegraph forms in 1851 but did not issue telegraph stamps until June 1854.

The first telegraph stamps issued might be those of the English and Irish Magnetic Telegraph Co., released in 1853. One of these stamps, a 1 shilling black telegraph stamp, Hiscocks Great Britain No. I.5.1, is shown in Figure 1.

The first government-issued telegraph stamps were produced by Spain and went into use on July 1, 1864. A 1-reis brown Coat of Arms telegraph stamp, Hiscocks Spain No. I.1, is shown in Figure 2.

From 1870 to 1899, Spain issued stamps inscribed "Comunicaciones" or "Correos y Telegs." These stamps could be used for payment of either postage or telegraph fees. They are similar in this respect to British Empire stamps inscribed "Postage and Revenue," which were valid for payment of either postage or tax. The dual-purpose Spanish stamps are listed in standard postage stamp catalogs. Telegraphically used Spanish stamps can be identified by their punched cancels.

The Belgian telegraph stamps were the world's first hexagonal stamps, so shaped to make them easily distinguishable from postage stamps. A Belgian 1-franc green King Leopold I telegraph stamp, Hiscocks Belgium No. I.1, is shown in Figure 3.

In the United States and Canada, the telegraph systems were never owned or operated by the government, so all U.S. and Canadian telegraph stamps are private and local stamps. The U.S. stamps are listed in the Scott Specialized Catalogue of United States Stamps and Covers.

The first American telegraph stamps were issued by the New York City and Suburban Printing Telegraph Co., probably in 1859. A 2¢ black telegraph stamp, Scott 6T2, from this company, is shown in Figure 4.

Commutation stamps were sold to the general public for prepayment of telegraph fees.

Frank and complimentary frank stamps were usually nondenominated and were given to important customers such as railroad, newspaper, and express company officials or telegraph company stockholders to provide one free telegram per stamp.

Duplicate stamps were for use in office or messengers' receipt books.

Collect stamps were the equivalent of postage due stamps, showing that the telegraph fee had not been paid or paid in full by the sender.

Telegraph stamps of Ceylon, India, Uganda and Uruguay were usually in the form of long vertical or horizontal strips that often repeat the same design element or denomination on both halves of the stamp.

The stamps were affixed across the juncture of the message form and the receipt. When the form and receipt were separated, the customer and the telegraph operator would each have half of the stamp in evidence of payment.

In Argentina and Spain some telegraph systems were operated by railway companies, leading to the issuance of railway telegraph stamps.

Official telegraph stamps have been produced by the Dominican Republic, Ecuador and India.

Telegraph tax stamps were issued by the United States, Iran, Spain, Portugal and some Portuguese colonies.

The United States 1¢ red and 3¢ green George Washington telegraph tax stamps, Scott R4 and R19, were used to show payment of the tax on telegraph despatches that was collected with other taxes imposed in 1862 to pay for the cost of the Civil War.

Use of the stamps began on Oct. 1, 1862. The law was amended effective Dec. 25 of that year so that any internal revenue stamp, except proprietary stamps, could be used to pay any documentary tax.

These were charity stamps whose use was compulsory to send a telegram on certain days of the year.

A 2-centavo brown-lilac For the Poor telegraph tax stamp, Hiscock Portugal 4, is shown in Figure 8.

Spain issued a number of charity labels for the benefit of orphaned children of telegraph workers.

The stamps inscribed "Hogar de Huerfanos de Telegrafos" were sold to support an orphanage for the children. Those in which the inscription begins with "Colegio" instead of "Hogar" were sold for the benefit of an orphans' school. Like the Spanish orphans of the post charity labels that could be used on letters, the use of these stamps on telegraph despatches was entirely voluntary.

Orphans of the telegraph charity stamps are listed in the Spanish-language GalvezSpecialized Spanish Stamp Catalog and Edifil Unificado Stamp Catalog of Spain and Dependencies.

A 1-peseta orange Valencia Communications Palace charity stamp, Galvez orphans of the telegraph No. 5, is shown in Figure 9.

Telegraph seals are the equivalent of official postal seals. They were issued by a number of telegraph authorities, including Argentina, Colombia, Ecuador, Germany, Italy, Japan, Luxembourg, New Zealand, Norway and Sweden.

Telegraph seals did not have a monetary value but were used to seal the envelope in which the telegram was delivered. A Swedish Coat of Arms telegraph seal is shown in Figure 10.

Are you tired of the endless profusion of new postage stamp issues? Why not give telegraph stamp collecting a whirl?