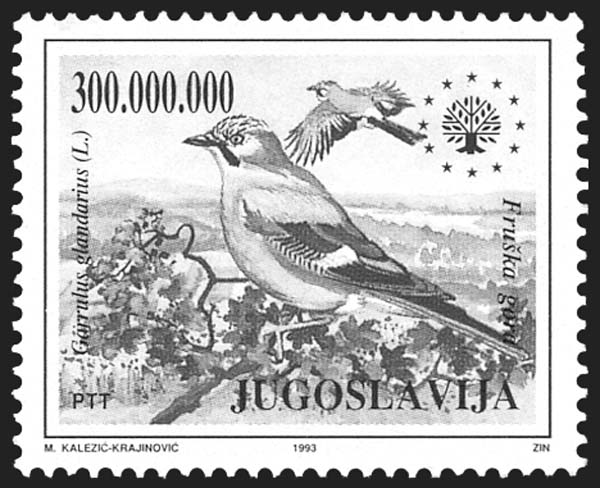 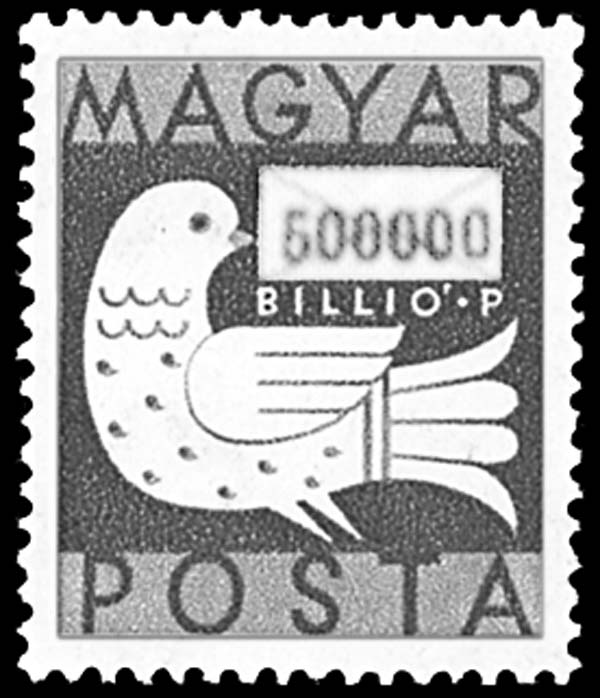 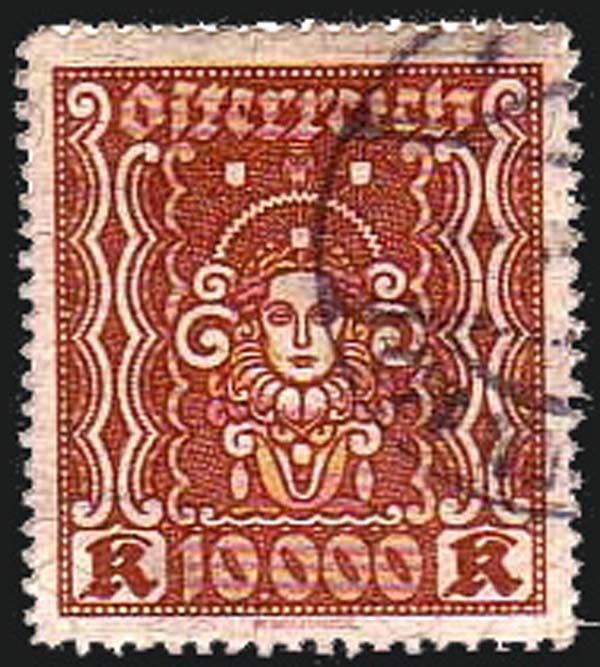 Figure 5. This Austrian 10,000-krone red-brown Symbols of Art and Science stamp (Scott 298) represents the highwater mark of Austrian hyperinflation in 1924. Click on image to enlarge. 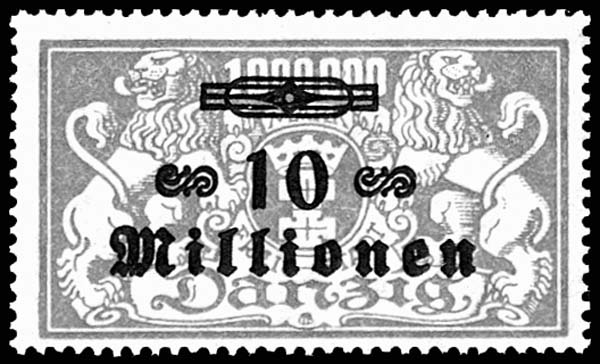 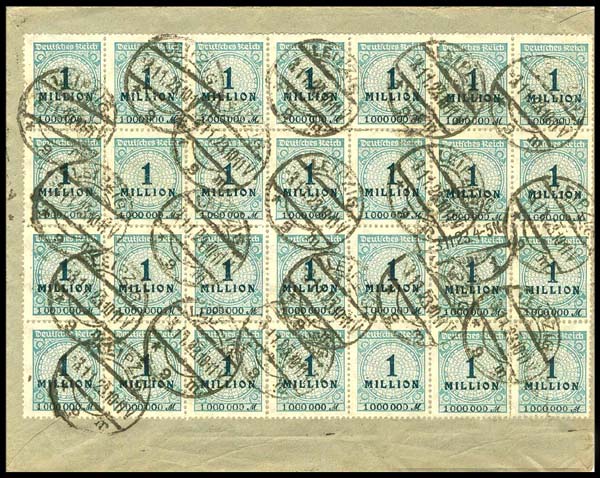 Figure 2. The back of a registered cover mailed Jan. 31, 1923, from Leipzig, Germany, to Magdeburg bearing 28 1-million-mark greenish-blue Numeral stamps (Scott 281). Click on image to enlarge. 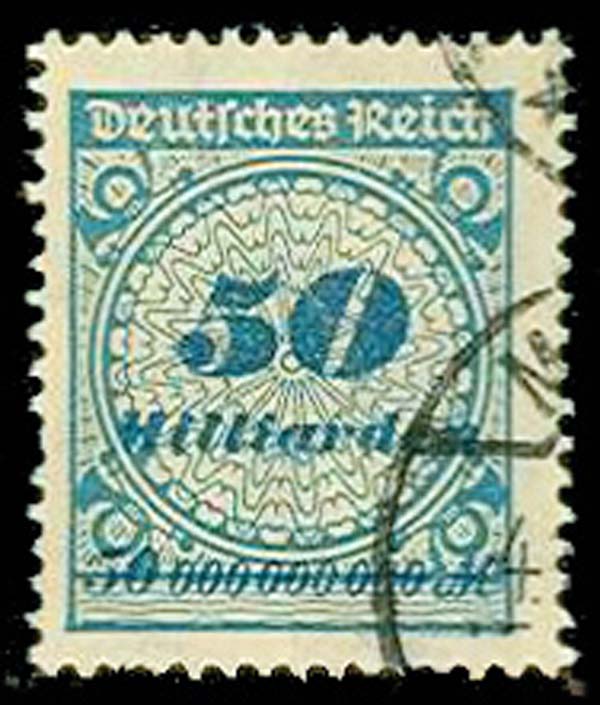 Merriam Webster's Collegiate Dictionary defines inflation as "an increase in the volume of money and credit relative to available goods and services resulting in a continuing rise in the general price level."

Inflation hasn't been much of a problem in the United States economy of late, but for those old enough to remember the dark economic days of the Carter administration, the word can still send a shiver up the spine.

An annual inflation rate of 12 percent is bad enough: I certainly hope I never personally experience worse. But a perusal of the stamp catalogs will show evidence of periods of inflation that make the worst of the Carter years look like economic high times.

Inflation isn't unique to modern times. In the third century A.D., Rome debased its coinage with base metals, increasing the amount of coins in circulation, decreasing their intrinsic worth and causing inflation.

In the 14th century, the Chinese emperor replaced coins with paper money, bringing on serious inflation.

An influx of gold and silver from the Americas caused inflation in Spain in the 16th century.

Under the influence of her financial advisor Sir Thomas Gresham, Queen Elizabeth I rehabilitated the debased (inflated) English shilling and restored the country's economy. Gresham's famous dictum that "bad money drives out good money" is still a watchword of economics.

France's costly support for the American Revolution caused serious inflation, which was a major contributor to the French Revolution.

But all of that pales in comparison with the inflation that hit some countries after World War I. Because this inflation was exponentially worse than any that had gone before, it is called hyperinflation.

The countries with the highest inflation after WWI were Germany, Austria and Hungary.

Inflation was already a problem arising from wartime deficit spending. The hyperinflation in Austria, Germany and Hungary was a direct by-product of having lost the war.

When the old multinational empires were dismembered, normal trading patterns were interrupted by new international boundaries and national tariff barriers. Raw materials were cutoff from factories. Finished goods were cutoff from markets. Production and trade declined and economies faltered.

All that was bad for the economy but not necessarily inflationary. What really got the inflation ball rolling were the reparations payments that the losers were ordered to pay the winners by the terms of the various treaties ending WWI.

In Germany, hyperinflation resulted as the value of the currency in foreign exchange plummeted when the adverse balance of payments reduced foreign investor demand for the German mark.

The falling exchange rate increased the cost of imports and the cost of living, causing workers to demand higher wages.

Wages rose as workers strove to maintain their standard of living. Companies paying higher wages were forced to raise prices for goods or services that they sold, driving prices and the cost of living even higher, and causing the mark to plummet even further in the foreign exchange market.

Hyperinflation also resulted through the heavy deficit spending and national debt that no one believed would be reduced in the future. Sources of government credit evaporated when faced with the prospect of budget deficits for the foreseeable future.

With no further loans available, the German government could no longer borrow to cover the difference between revenue and expenditure.

The only available option was to print more and more banknotes. As increasingly worthless paper money flooded the marketplace, the foreign exchange rate dropped even further and the cost of living continued to skyrocket.

In Germany in 1923, there were trillions and trillions of paper marks in circulation. Prices could rise 1,000 times between the time that a worker was paid and the time that he could rush to a shop to try to buy something.

Germany's high-denomination prewar stamp was the

5 mark. In 1923, Germany issued the blue Numeral stamp (Scott 299), shown in Figure 1. The stamp's denomination is an astounding 50 billion marks.

Note that the Figure 1 stamp is used. A mint, never-hinged example of the 50-billion-mark stamp catalogs a paltry 90¢. The value for used is $32.50.

(This particular stamp is for sale at $16.25 on the online Stamp Store of the American Philatelic Society.)

Used stamps from hyperinflationary periods are often more valuable than the same stamps in unused, hinged or mint condition. This is because the stamp's usage period was often only a few days or weeks as mounting hyperinflation robbed it of franking power. That being the case, it is usually a good idea to have off-cover used stamps from periods of hyperinflation expertized to ensure that the cancels are genuine and contemporary.

Postal history is one of the most interesting challenges of collecting stamps or covers from a hyperinflation period. Postal rates often lasted for only a few days, or in a few cases for only hours.

Assembling a collection of covers that shows examples of short-lived rates for the hyperinflationary period can be the work of a lifetime.

Covers from hyperinflationary periods are often plastered over with lots of stamps. It often took dozens of stamps denominated at the previous week's letter rate to pay the letter rate the following week.

The back of a registered cover mailed Jan. 31, 1923, from Leipzig to Magdeburg is shown in Figure 2 (a cover offered on eBay in April).

The back of the cover is franked with 28 1-million-mark greenish-blue Numeral stamps (Scott 281). There were eight more stamps on the front of the cover, but they are no longer there.

Sometimes the printer could not keep ahead of the hyperinflation. The Danzig surcharged 10-million-mark-on-1-million-mark stamp (Scott 143) shown in Figure 3 is an example.

Orders for the 1-million-mark stamp were placed in August or September 1923, but by the time it was printed it no longer paid a rate.

The newly printed 1-million-mark stamps were never issued. They were immediately surcharged to 10-million-marks and pressed into service.

German hyperinflation was finally brought to an end by Gustave Stresemann. Stresemann was the founder of the center-right German People's Party and the most successful statesmen of the Weimar Republic.

Stresemann became chancellor in 1923 with the support of the Social Democratic Party. He ended passive resistance in the occupied Ruhr and resumed reparations payments to the Allies.

Stresemann tackled the problem of inflation by establishing the Rentenbank and by reforming the currency with the new rentenmark.

The rentenmark's value was based on Germany's staple crop, rye, rather than on gold. In effect, the rentenmark mortgaged the theoretical value of Germany's land and industry to stabilize its currency. The currency was stabilized at a rate of 1 billion old marks to one new rentenmark. With public confidence in the new currency and wages and prices stabilized, food staples and consumer goods reappeared in shops and the vicious hyperinflationary cycle was broken.

Stresemann was honored by Germany in 1975 with the 50-pfennig stamp (Scott 1203a) shown in Figure 4, from the Nobel Prize Winners souvenir sheet.

In Austria, the highest face-value stamp issued before WWI was denominated 10 kroner. Austrian postal inflation peaked in 1924 with the 10,000kr red-brown Symbols of Art and Science stamp (Scott 298), shown in Figure 5.

Austrian hyperinflation ended in 1925 with the monetary reform that replaced the devalued heller and krone with the new groschen and schilling currencies.

Things weren't much better for Hungary, Austria's former imperial partner. Hungary's highest denominated prewar stamp had a face value of 5 koronas. After the war, in 1924, Hungary issued a 10,000k stamp.

The currency reform of 1926 replaced the nearly worthless Hungarian korona with the new pengo currency.

A period of hyperinflation is actually beneficial to debtors, because in effect, it wipes out their debts. But it is disastrous to both creditors and to the personal savings of the frugal: the value of what they have lent or saved is wiped out.

After World War II, some communist nations, notably Hungary and Romania, intentionally brought on periods of hyperinflation to wipe out the savings of the middle class and destroy the wealth of the wealthy.

But the country with the highest overall rate of inflation in the 20th century was Yugoslavia. That Balkan country suffered double-digit inflation during most of the 1960s and all of the 1970s and 1980s. Hyperinflation set in as the country headed toward breakup in the 1990s. A Yugoslavian 300-million-dinar Garrulus Glandarius stamp (Scott 2219) is shown in Figure 7.

Thanks to Linn's reader Edric Clarke for suggesting the topic of this Refresher Course.