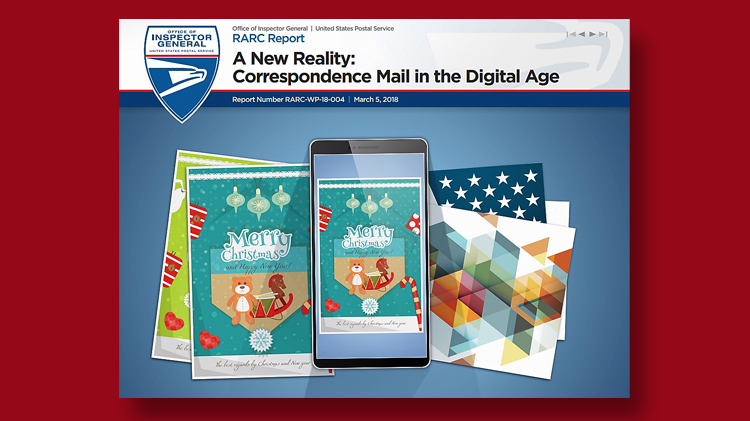 There is no question at the United States Postal Service’s headquarters that the decline in letter writing has been one of the major calamities that has destroyed the Postal Service’s financial model.

But as an appendix to a white paper issued March 5 by the agency’s inspector general makes clear there are some major disagreements over whether the Postal Service has weathered the worst of the drop in first-class mail volume.

Titled “A New Reality: Correspondence Mail in the Digital Age,” the inspector general’s paper says flatly that “our analysis confirms that correspondence is waning as a channel of personal communication — with electronic diversion being the biggest culprit for the continuous volume decline …”

The paper goes on to suggest it is possible that the current trends could “continue, intensify or weaken.”

In any event, the Postal Service “may need to continue to seek innovative ways the integrate digital features into physical pieces of correspondence mail to enhance the product’s relevance to the American public.” Or so argues the Risk Analysis Research Center, part of the inspector general’s staff.

When Joseph Corbett, the Postal Service’s chief financial officer, and Jacqueline Krage Strako, its acting marketing chief, read a draft of the inspector general report, they dissented to some of the conclusions.

For example, they expressed puzzlement over the statement “It is possible that correspondence mail volume has already seen its most dramatic drop.”

“It is unclear how the OIG can make this conclusion from the analysis of the factors presented in this report,” the two Postal Service officials wrote in an appendix to the paper.

They cited two instances of the paper saying “that there is a higher likelihood for the acceleration of electronic diversion which would result in a more dramatic drop in future correspondence mail volumes.”

The agency’s recent mail volume totals from fiscal 2017 and the first quarter of the current year, they note, “support the likelihood of accelerating diversion.”

Corbett and Strako also took the inspector general to task for suggesting that younger people may never use mail for personal correspondence because they are so accustomed to using electronics.

“The OIG’s own studies on digital natives states that millennials have very favorable attitudes regarding mail,” they said.

The two officers also rebutted the suggestion that “mail use will not increase as people age.”

The Postal Service’s 2016 Mail Moments study shows “that clearly millennials value the time they spend with their mail, and are willing to spend relatively greater amounts of time with their mail than older demographic groups” they said.

The two conclude their review of the white paper, saying the inspector general needs to dig deeper into the efforts of foreign post to boost their correspondence mail and see if the benefits of those efforts outweighed their costs.

What was unchallenged in the white paper was the inspector general’s finding on the importance of correspondence mail.

First-class mail still generates approximately 40 percent of the postal service’s revenues, falling from over 60 percent in the late 1970s.

First-class mail revenues have declined by 27 percent since 2007, the paper noted.

“The continued vitality of first-class mail is key to the future of the U.S. Postal Service,” the paper said.