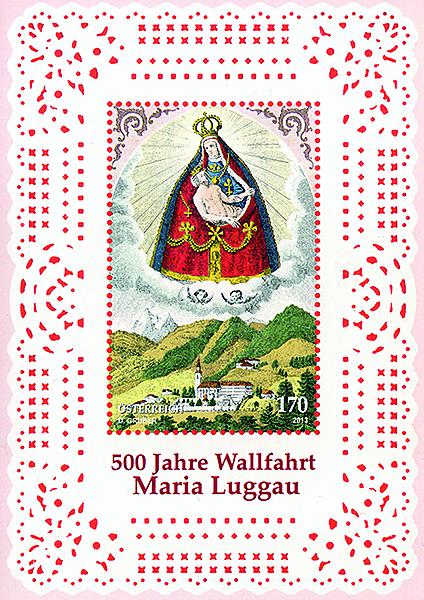 This Austrian souvenir sheet with a lace border was given a special prize by the St. Gabriel award jury. The sheet marks the 500th anniversary of pilgrimages to Maria Luggau. 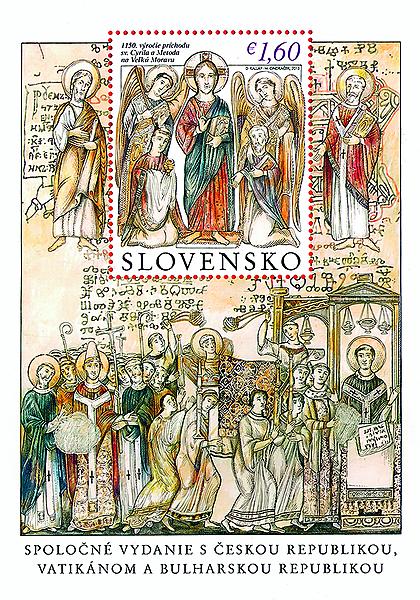 The Slovakian souvenir sheet honoring saints Cyril and Methodius won the St. Gabriel award for the best religious stamp of 2013.

The 32nd edition of the St. Gabriel award for best religious stamp of 2013 has been awarded to Slovakia for a souvenir sheet honoring saints Cyril and Methodius.

A special prize also was awarded to Austria for a souvenir sheet commemorating the 500th anniversary of pilgrimages to Maria Luggau.

The Slovakian souvenir sheet was issued June 12 to mark the 1,150th anniversary of the evangelization of Great Moravia by the two saints.

The sheet was part of a joint issue, as mentioned by the president of the award’s steering committee, Gianni Fontana.

“In giving this prize to Slovakia we jointly recognize also the philatelic tributes to the co-patron saints of Europe concurrently paid by Bulgaria, the Czech Republic, and the Vatican,” Fontana said.

He added that the Slovakian sheet highlights the extraordinary importance of saints Cyril and Methodius, who brought Christianity and culture to the Eastern European countries and also invented the Cyrillic alphabet.

Dusan Kallay designed the souvenir sheet. It was engraved by Milos Andracek.

The €1.60 stamp at the top of the sheet shows a restored interpretation of a faded ninth-century fresco of the judgment of St. Cyril that adorns the Basilica of St. Clement in Rome.

The fresco shows Christ blessing the world in the center with archangels on either side (Michael on the right and Gabriel on the left). The two kneeling worshippers are the brothers Cyril and Methodius, as confirmed by inscriptions discovered in the 19th century.

The image of the fresco continues into the selvage in the upper part of the sheet. The apostle Andrew is shown on the left and St. Clement on the right.

Another fresco from the same basilica adorns the lower part of the souvenir sheet. This fresco shows the transfer of St. Clement’s remains.

The sheet’s selvage includes inscriptions in the Glagolitic alphabet, the ninth-century alphabet created by Cyril and Methodius. These inscriptions reproduce a page from the Codex Assemanius, a late 10th-century or early 11th-century manuscript kept in the Vatican Library in Rome.

The Austrian souvenir sheet, issued May 31, 2013, was designed by David Gruber. The design is based on an old print of Mary mourning over the dead body of Jesus, a work frequently described as a late Gothic pieta.

The shrine at Maria Luggau also is pictured on the €1.70 stamp.

The design is enhanced by delicate lace work in the selvage of the sheet.

The award ceremony took place Sept. 28 at the Ceramics Hall of the Fioroni Palace at Legnago, near Verona, Italy. A special Italian postmark designed by Silvio Craia commemorated the event.