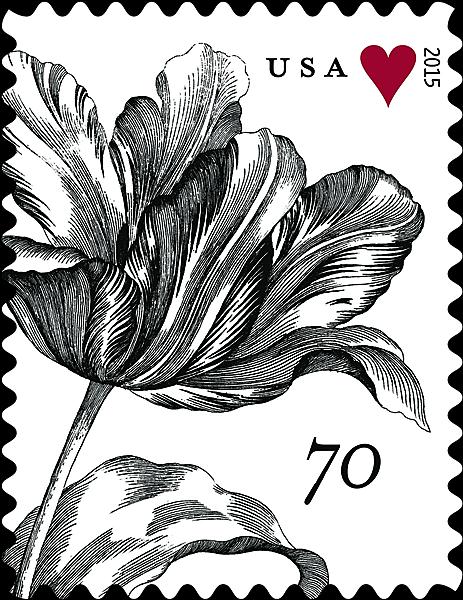 The stamp has been taken off sale in full panes of 20, blocks of 10 and blocks of four.

Both versions of the 70¢ Vintage Tulip stamp press sheets — with die cuts and without — were also unavailable on the USPS Stamp Store website in early May.

The Vintage Tulip stamp was issued at the same time as a matching Vintage Rose forever stamp (Scott 4959), also in panes of 20.

Both are printed in two-color intaglio, and each has a small red heart in the upper corner. The rest of the design, reproducing artwork by Maria Sibylla Merian (1647-1717), is in black.

USPS spokesman Mark Saunders told Linn’s Stamp News that the Vintage Tulip stamp “will be reissued once there is a rate change,” adding that the date of the next rate change is still to be determined.

A proposal to increase that cost to 71¢ was approved earlier this year, but the Postal Service then delayed implementing the new rate as it sorted out problems with planned increases for other areas such as advertising mail and periodicals.

It seems likely that rather than print a new order of 70¢ Vintage Tulip stamps that might soon be obsolete, the Postal Service is waiting until the rate case is finalized.

The 70¢ honoring C. Alfred “Chief” Anderson (Scott 4879), also issued in 2014, appears to be off sale from the online site, though the full pane can be ordered in combination with the digital color postmark first-day cover as item 117110.