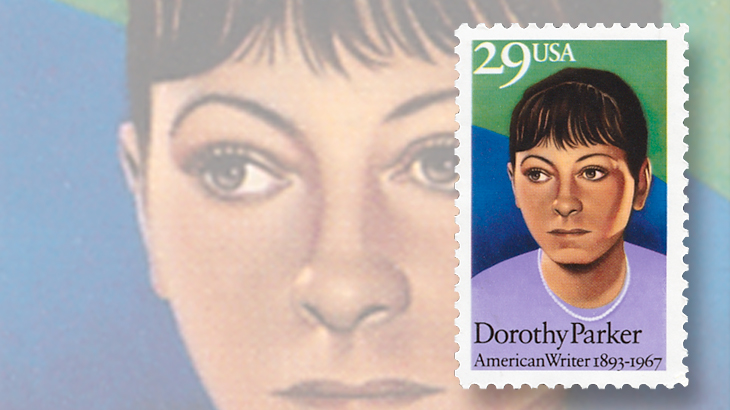 Writer and social activist Dorothy Parker, commemorated on a 29¢ stamp issued in 1992.

Dorothy Parker, who was born Dorothy Rothschild on Aug. 22, 1893, may be best known as a poet, but she was also a satirist, a screenwriter, a playwright, an author of fiction, an essayist, and a civil rights advocate.

Her poetry was first published in Vanity Fair in 1914, and she soon found employment on the editorial staff at Vogue. While working for Vanity Fair in 1919, she met with fellow writers over lunch at the Algonquin Hotel in New York City, and the group came to be known as the Algonquin Round Table. Their conversations and witticisms often served as fodder for the members’ respective columns.

Parker wrote poetry throughout the 1920s for The New Yorker, The New Republic, Vogue and other publications. Her short story Big Blonde won the O. Henry Award in 1929, and her collaboration on the screenplay for A Star is Born in 1937 earned Parker an Academy Award nomination.

Parker was married to stockbroker Edwin P. Parker from 1917 until their divorce in 1928. She was later married twice to writer Alan Campbell; he died in 1963, and Parker died in 1967.

She left her estate to Martin Luther King Jr., though the two had never met. When King died the following year, her estate and control of her literary rights came to the NAACP, in accordance with Parker’s wishes, and remains there today.