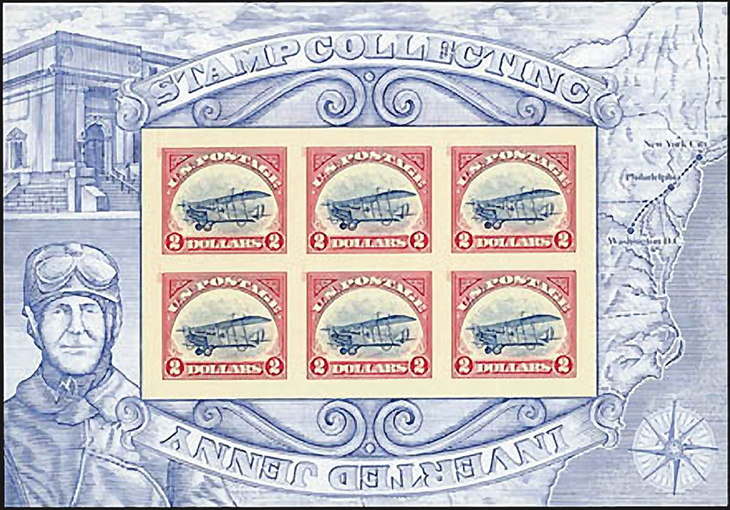 In October, Daniel F. Kelleher auctioned a sheet of six of the modern United States rarities known as the $2 upright Jenny Invert stamps. About 29 of the 100 sheets printed are known. This example, expertized and graded superb 98, sold for $67,850. 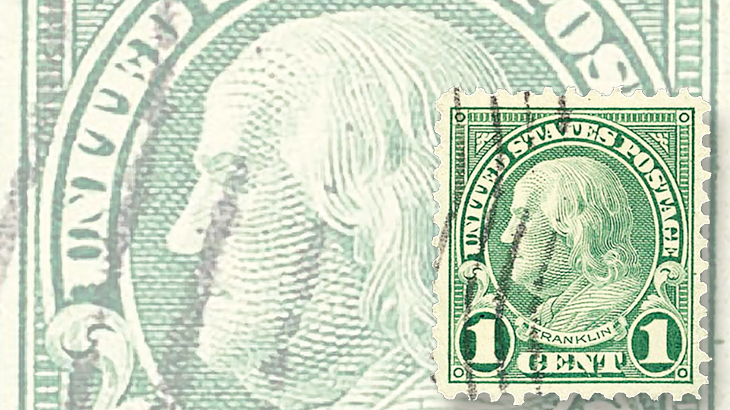 This 1923 1¢ Franklin rotary coil waste stamp, with large, even margins and no faults, sold for $17,110 at Kelleher’s October auction. 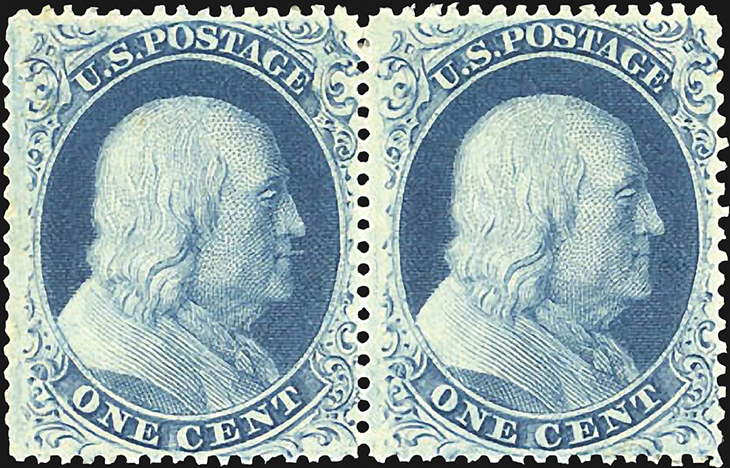 The Kelleher October auction also featured a pair of the United States perforated 1857 1¢ Franklin stamps comprising types III and IIIa (Scott 21-22), which sold for $10,620.
Previous
Next

On Oct. 26-28, the firm of Daniel F. Kelleher offered United States, British and worldwide stamps and postal history. The sale was previewed in Linn’s issue of Oct. 26.

The top item, as anticipated, was a sheet of six of the $2 upright Jenny Invert stamps (Scott 4806d).

The upright Jenny Invert stamps, produced by the U.S. Postal Service in 2003, show the Curtiss JN-4 biplane flying as originally intended when the 24¢ red-and-blue airmail stamp, America’s first airmail stamp (Scott C3), was issued in 1918. One sheet of 100 of the original stamps with the biplane misprinted upside down was discovered by a lucky collector in Washington, D.C., at the time of issue, and those errors instantly became the stuff of philatelic legend.

Recreating that heart-stopping thrill of discovery was the intent behind the modern $2 upright Jenny stamp. Shortly after the $2 Jenny Invert was released in 2013, the U.S. Postal Service revealed that, among the millions of sealed packages distributed to post offices nationwide and sold online, were 100 sheets with the biplane intentionally printed right-side-up: inverting the invert, as it were.

Because this intentionally created variety initially went against the Scott catalog listing policy, the Scott editors resisted giving the upright Jenny Invert sheet a catalog number. Following extended discussions with collectors and dealers, Scott modified its listing policy and assigned catalog numbers to both the sheet (Scott 4806d) and a single stamp (4806c).

As many as 29 or 30 of the 100 upright Jenny Invert sheets have surfaced so far, and several have been sold at auction, typically fetching around $50,000 each.

The sheet offered by Kelleher was described as “the highest graded example and likely to remain as such as most of these are visibly off center.”

It is accompanied by a certificate from Professional Stamp Experts assigning the stamps a grade of superb 98. The next highest grade is reported to have been extremely fine-superb 95, for a sheet that was subsequently broken into single stamps.

Including the 18 percent buyer’s premium levied by Kelleher on all lots, the sheet sold for $67,850.

Lucky finders of an upright Jenny Invert sheet can send in a notice enclosed in the package and receive a personalized certificate of authenticity from the postmaster general. The consignor of the sheet offered by Kelleher had not yet done this, giving the new buyer the chance to do so.

Another scarce U.S. stamp in the sale was a 1¢ Franklin rotary coil waste stamp of 1923 (Scott 594), with large, even margins and no faults.

Slightly more than 100 used examples of this stamp are known, produced when the Bureau of Engraving and Printing attempted to salvage leftovers from a rotary-press run of coil stamps by perforating them gauge 11 and handing them over to the post office as sheet stamps. Many are off-center or faulty, because they were unrecognized at the time of issue and used up commercially. Ken Lawrence’s excellent account of the genesis of these stamps and how they can be correctly identified was published in Linn’s issue of Feb. 16.

With certificates from both PSE and the Philatelic Foundation, the example offered by Kelleher sold for $17,110.

A pair of perforated 1857 1¢ Franklin stamps comprising types III and IIIa (Scott 21-22), which differ in the degree of scrollwork visible on the periphery of the design, sold for $10,620.

At the lower end of the price spectrum in the Kelleher sale was a 2¢ Washington-Franklin definitive of 1912 (Scott 406), a stamp that normally catalogs $15 unused. For an example rated superb-98, its value rises to $425 in the “Specialized by Grade” listings in the Scott U.S. Specialized catalog.

Touted as having “enormous boardwalk margins and bodacious color” and being “an amazing stamp the likes of which we have never seen on this normally tight-margined issue,” the example offered by Kelleher boasted a certificate from Philatelic Stamp Authentication and Grading giving it a superb-98 jumbo designation. It sold for $590.

A mint block of four of that same issue in a scarce shade of lake (Scott 406c), rather than the usual carmine, sold for $11,800. All four stamps are well-centered, although the two on the right show some minor oxidation.