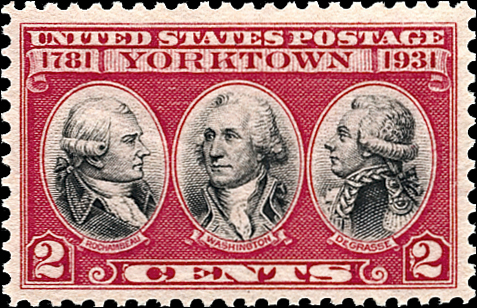 The two French military leaders are commemorated on the 1931 U.S. stamp for their important roles in the 1781 surrender of British Gen. Charles Cornwallis following the Siege of Yorktown, Va., which is considered the final major land battle of the Revolutionary War.

Rochambeau was the commander of an expeditionary force of thousands of French troops that journeyed across the Atlantic to support their American allies, who were fighting for independence against the British.

Rochambeau and his men marched alongside Washington and his American forces to Yorktown. Rochambeau's experience as a military strategist is considered a key factor in the victory for the allied forces.

Although Rochambeau also appears in the John Trumbull painting Surrender of Lord Cornwallis, the 1976 U.S. souvenir sheet reproducing the artwork (Scott 1686) crops out all of the French troops (at left) with the exception of Rochambeau's horse's muzzle and raised hoof.