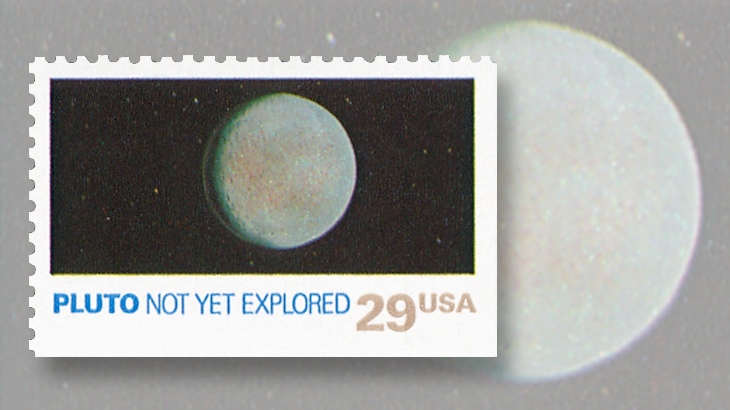 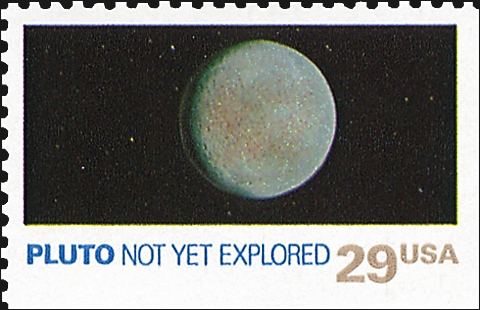 An example of the 29¢ Pluto stamp from the 1991 Space Exploration set is now passing by Pluto aboard the New Horizons spacecraft.
Previous
Next

When the New Horizons space probe passes by distant Pluto this month, it will have traveled about 3 billion miles in 9½ years.

The stamp is part of the Space Exploration set issued for National Stamp Collecting Month in 1991. Unlike the other nine stamps in the set, which each show a planet or the moon along with a visitor in the form of Earthly space hardware, the 29¢ Pluto stamp carried on the New Horizons mission simply depicts the tiny former planet alone in space, with the inscription: “Pluto, Not Yet Explored.”

New Horizons Principal Investigator Alan Stern takes credit for the stamp’s appearance on the spacecraft, according to a recent article by Eric Betz in Astronomy magazine.

Watch NASA’s live coverage from mission control as the spacecraft flies by Pluto on a video provided by the Washington Post.

“It was my idea to send it,” he said. “For many years, people had waved that stamp around as sort of a call to arms — as a motivating graphic — ‘Not yet explored.’”

Ron Miller, the artist who designed the stamps in the set, told Astronomy that the stamp added motivation to the scientists at the Advanced Projects Group at the Jet Propulsion Laboratory.

JPL engineer Robert Staehle jokingly asked a colleague what they were going to do about the stamp inscription, “Pluto, Not Yet Explored,” and Miller said Staehle claimed that‘s when “the mission was born.”

Mary-Anne Penner, the U.S. Postal Service’s acting director of stamp services, told CollectSpace.com that the Postal Service is honored to have the stamp traveling on board.

The New Horizons probe makes its closest pass to Pluto on the morning of July 14.