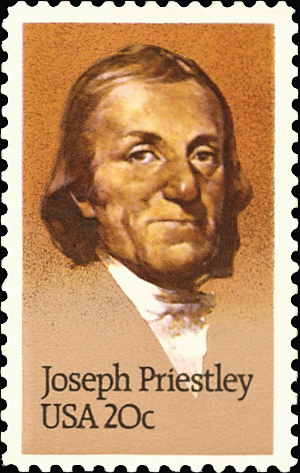 The first-day ceremony was held at the Joseph Priestley House in Northumberland, Pa., where Priestley lived for the last 10 years of his life. He died Feb. 6, 1804, and is buried at Northumberland's Riverview Cemetery.

Priestley was a Unitarian clergyman in England, but he is best known for his many scientific studies and discoveries; in particular, his success in isolating oxygen in 1774. He also discovered other gases, including nitrogen, ammonia, nitrogen dioxide, nitrous oxide, hydrogen chloride and sulfur dioxide.

He wrote History and Present State of Electricity in 1767, and was awarded the Copley Medal by the Royal Society in 1773.

Priestley's religious teachings ran counter to the precepts of the Church of England, and when his advocation on behalf of religious dissent met with hostile opposition he left England with his family to live in the United States.

The design of the 20¢ stamp is based upon an 1801 painting of Priestley by Rembrandt Peale, from the American Philosophical Society Library.