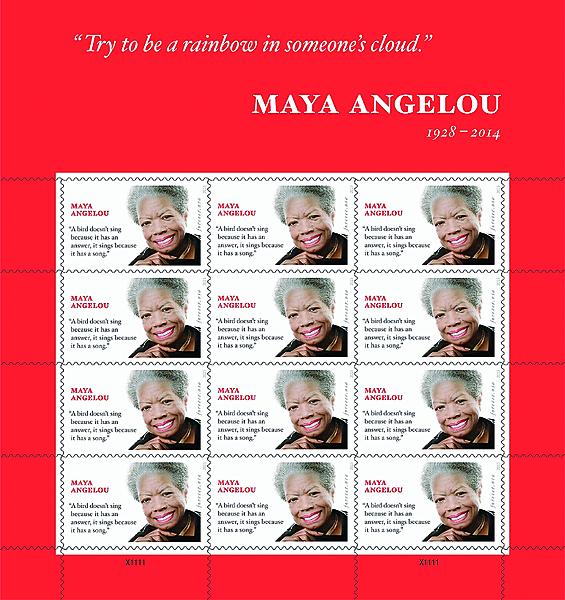 The pane of 12 Maya Angelou stamps includes a quote from one of her books across the top banner. 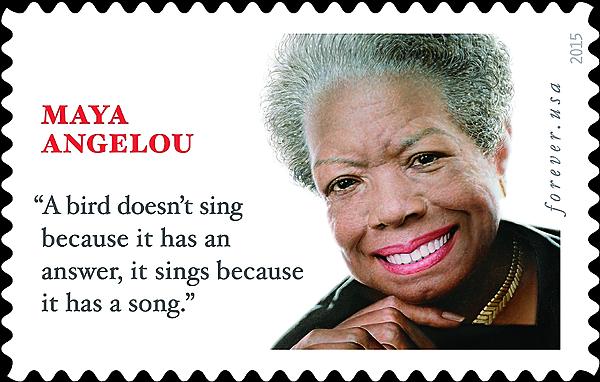 The stamp will go on sale in panes of 12 nationwide the same day.

Details of who will participate in the ceremony have not been revealed by the Postal Service.

Maya Angelou was born Marguerite Annie Johnson in St. Louis, Mo., on April 4, 1928. A singer and dancer in the 1950s, she emerged as an author and poet in the 1960s, gaining prominence with the publication of her autobiographical I Know Why The Caged Bird Sings in 1969. She was an actress on stage, in films and on television, and is well known for her published poetry collections and essays.

Angelou was also active in the civil rights movement, including her work as a coordinator for the Southern Christian Leadership Conference.

The stamp design consists of a portrait of Angelou against a white background, her name in red letters, and the quote “A bird doesn’t sing because it has an answer, it sings because it has a song.”

The portrait of Angelou on the new stamp is from a 48-inch by 48-inch oil-on-canvas painting by Ross Rossin from 2013. The painting is in the collection of the Smithsonian National Portrait Gallery, and will be displayed there through Nov. 1.

The artwork is in a style known as hyperrealism, which reproduces its subject with details and textures that are more distinct than those rendered by a high definition photograph.

Andrew Young, the former U.S. ambassador to the United Nations, said, “I applaud the U.S. Postal Service for their decision to honor my beloved friend Maya with a forever stamp, and for using Rossin’s portrait of her for this perennial image. He is a master portrait artist — a prodigy. It is an honor to be immortalized by his brush stroke.”

The stamps are being issued in panes of 12 with a red banner inscribed “Try to be a rainbow in someone’s cloud,” a line from Angelou’s book Letter to My Daughter. The banner also shows Angelou’s name and “1928-2014.”

On the reverse of the stamp pane, the Postal Service has printed a five-paragraph biography of Angelou.

Author, poet, actress, and champion of civil rights Dr. Maya Angelou (1928-2014) was one of the most dynamic voices in all of 20th century American literature. The book I Know Why the Caged Bird Sings, an autobiographical account of her childhood, gained wide acclaim for its vivid depiction of African-American life in the South.

Published in 1969, I Know Why the Caged Bird Sings established Dr. Angelou as a literary figure and opened the field of autobiography more generally. In the book, whose title is taken from a line in the poem “Sympathy” by Paul Laurence Dunbar, she unflinchingly tells the story of her tumultuous early life in the South. The first of seven autobiographical volumes she wrote, I Know Why the Caged Bird Sings became a best seller.

As her career progressed, the pioneering author displayed extraordinary versatility. In the 1970s alone, she released the Pulitzer Prize-nominated poetry collection Just Give Me a Cool Drink of Water ‘Fore I Diiie, wrote the screenplay for the film Georgia, Georgia, received a Tony Award nomination for her role in the play Look Away, and played the role of Kunta Kinte’s grandmother in the acclaimed television miniseries Roots.

In the decades that followed, she continued to write and lecture around the country. At President Bill Clinton’s inauguration in January 1993, she recited “On the Pulse of Morning,” a poem she wrote for the event. Seen on television by millions, the stirring recitation further elevated her status as an American icon. The performance won a Grammy Award for Best Spoken Word Album. Dr. Angelou also received Best Spoken Word Album Grammy Awards for Phenomenal Woman in 1995 and A Song Flung Up to Heaven in 2002.

Dr. Angelou received the National Medal of Arts in 2000, and in 2011, at a ceremony in the White House, President Barack Obama awarded her the Presidential Medal of Freedom. She continued to tour, speak, write, and teach until the end of her life. Over the course of her career, Dr. Angelou was awarded more than 50 honorary degrees, released several books of essays and poetry, and had a profound influence on American culture.

The new stamp is being issued less than one year after Angelou died on May 28, 2014. The United States Postal Service no longer adheres to a self-imposed waiting period after an individual’s death before honoring them on a stamp.

For many years, the Postal Service guidelines for stamp subject commemoration said that no one other than deceased U.S. presidents would be honored earlier than 10 years after the person’s death. That waiting period was reduced to five years in 2007, and was eliminated completely in 2011 during Patrick Donahoe’s tenure as postmaster general. Donahoe proposed honoring living people on U.S. stamps, but that plan met with opposition from members of the Postal Service’s board of governors.

The Postal Service will also sell two first-day covers, one with a pictorial black postmark, and one with a digital color postmark. Both postmarks show a bird flying free from a cage.

The Postal Service’s uncacheted first-day cover for the Maya Angelou stamp is item 472616 at 93¢.