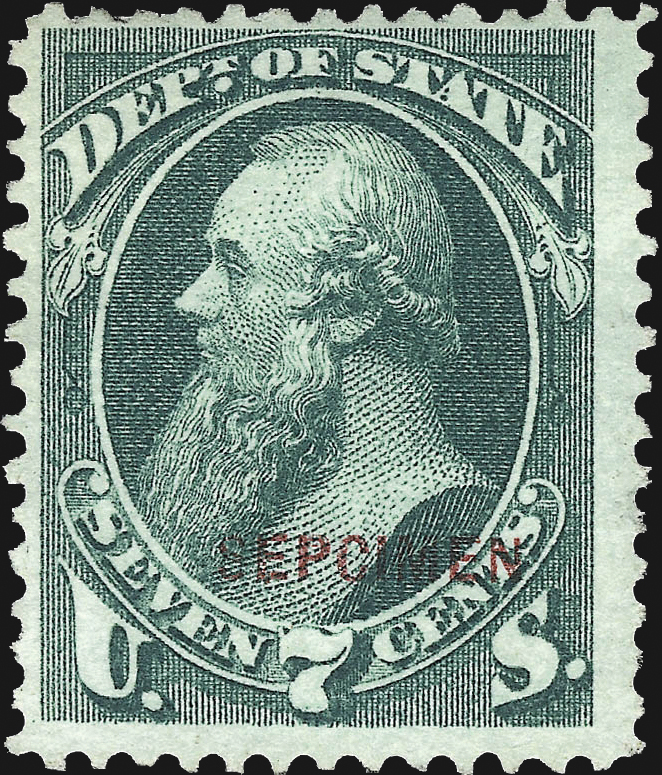 The 1875 special printing of the 7¢ bluish green State Department stamp with the "SEPCIMEN" error overprint will be offered by Siegel March 26. 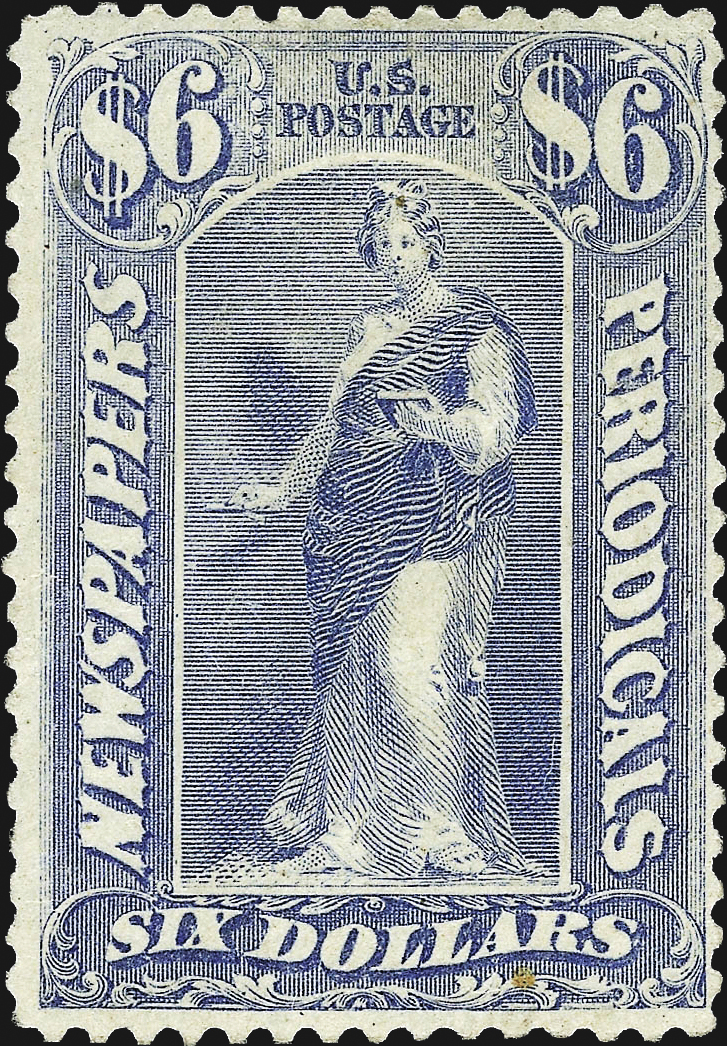 This unused example of the 1894 $6 pale blue newspaper stamp will be offered during the March 25 Siegel auction of the Curtis collection of back of the book material.

Two upcoming auctions from Robert A. Siegel Auction Galleries in New York City feature items from "the back of the book": newspaper stamps, postage dues, special delivery stamps, United States possessions and more from the Daniel B. Curtis collection on March 25; plus more than 170 lots of U.S. Official special printings from the collection of David Golden on March 26.

The auction offers a number of striking essays from 1912-13 for the 1913 parcel post issue, plus a complete and unique set of seven large die essays on card for the proposed but unissued second parcel post design, each prepared in a different color.

The extensive selection of newspaper and periodical stamps includes an unused example of the $6 pale blue stamp of the 1894 issue (Scott PR101). The Siegel census counts just 16 unused stamps and one used for this issue, and Siegel notes that most of the unused stamps "have varying degrees of faults."

This example is described as having a fine appearance, with original gum and hinge remnant, "radiant color, tiny natural inclusion, repaired at top with light thinning." It is offered with a 1996 Philatelic Foundation certificate and a listed value of $60,000, matching the value in the 2015 Scott Specialized Catalogue of United States Stamps and Covers.

The Golden auction opens with a remarkable single-lot collection of 92 imperforate sheet-margin pairs with Specimen overprints of the 1875 special printing of the 1¢ to $20 Official stamps, cut from the Earl of Crawford's set of strips of five.

These pairs, varieties of Scott O1S-O93S, all have full to large margins, according to Siegel, with prooflike colors and impressions, and bright and fresh paper. The estimate given is $75,000 to $100,000.

The auction also offers a number of singles, multiples and varieties, including the "SEPCIMEN" overprint with spelling error on various issues.

Fewer than seven examples are known of the 7¢ bluish green Stanton State Dept. stamp with "SEPCIMEN" error, according to Siegel, and the example in this auction is described as being without gum (as issued), "nice margins with perfs clear of design all around."

The stamp has a 1985 Philatelic Foundation certificate and is listed with the 2015 Scott U.S. Specialized value of $8,250 for Scott O61Sa.