The Monteverde Cloud Forest Reserve was included in a set of seven stamps recognizing national parks of Costa Rica. The stamps were issued in 2009. 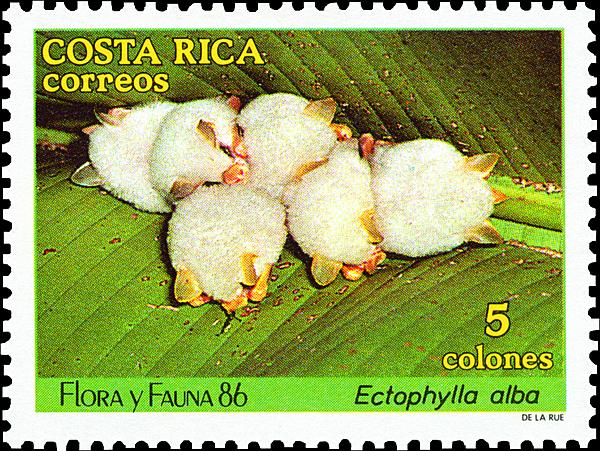 Fauna and flora appear on a 1986 set, including bats sleeping on the underside of a leaf. 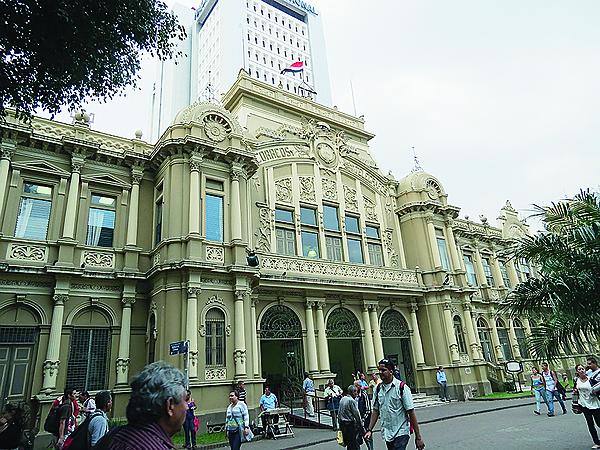 The beautiful central post office in the capital, San Jose, has a special philatelic sales window. 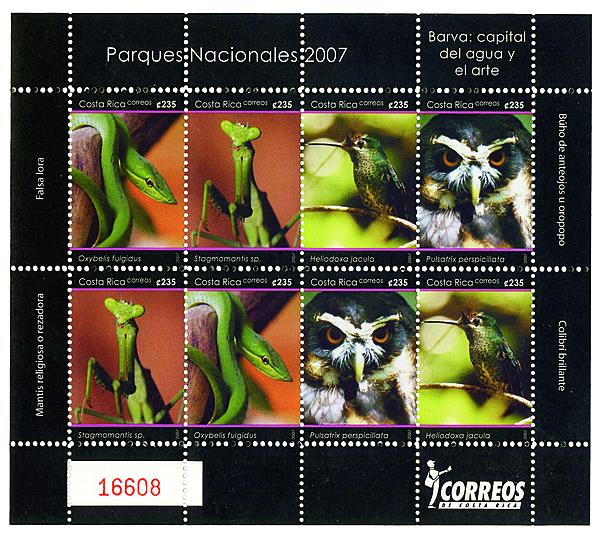 Fauna of national parks appear on four different stamps (in a pane of eight) issued in 2007. 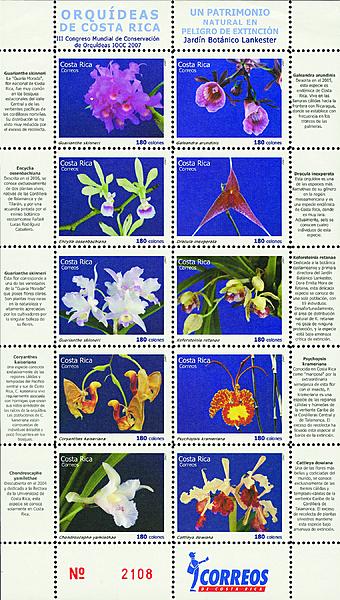 Ten different species of orchids are shown on a 2007 set marking the World Orchid Conference.

Three 1988 stamps for the Conference for Conservation of Natural Resources include a rare golden toad on the center stamp with a green sea turtle on the left and a blue morpho butterfly on the right. 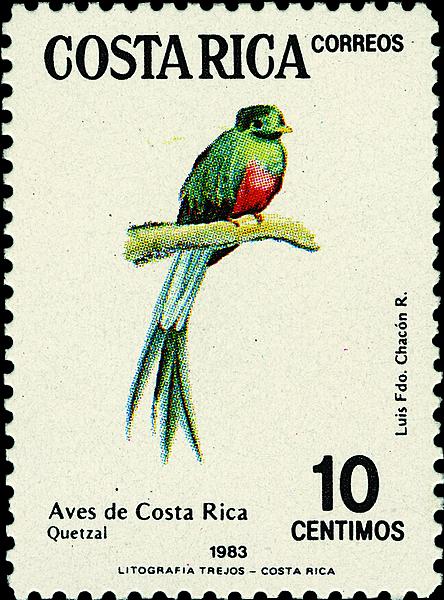 A quetzal was one of the native birds featured on a set of Costa Rica stamps in 1984. 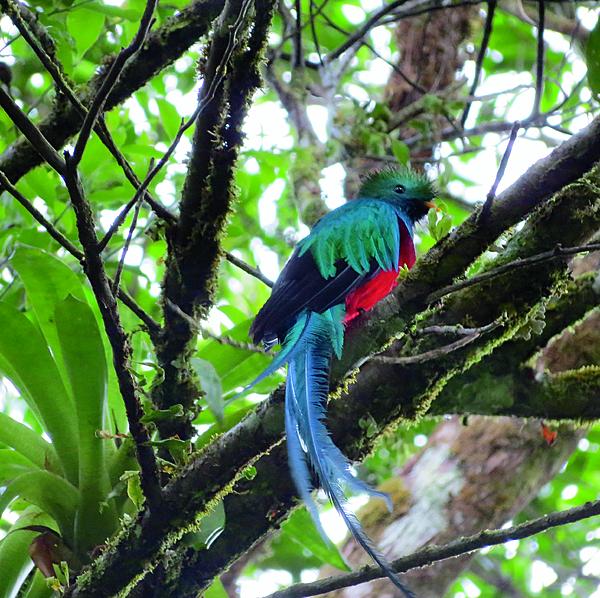 This is a stunningly colorful quetzal bird, native to the forests of Costa Rica.

The highest point in Costa Rica, Cerro Chirripo, is in a remote national park. 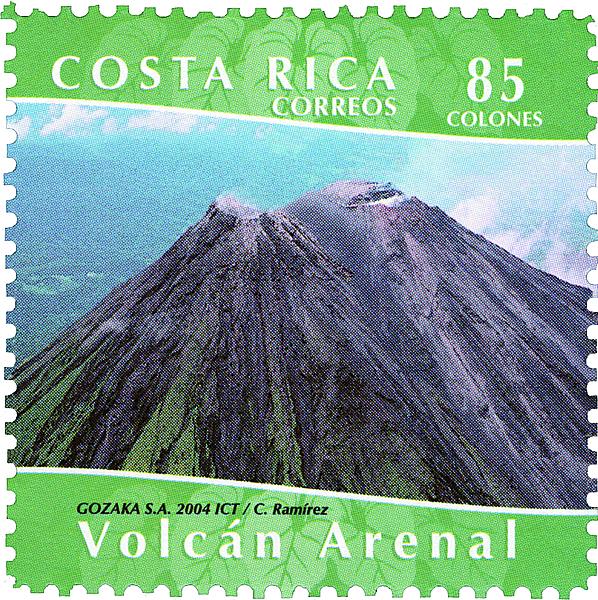 Arenal was one of three active volcanoes depicted on a 2004 set of stamps. 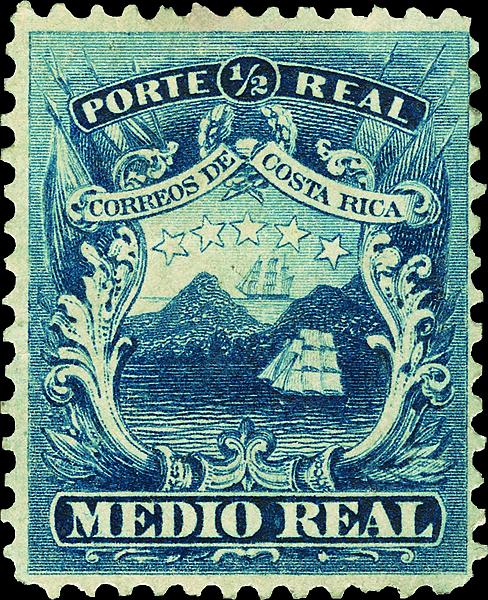 Costa Rica’s first stamp, from 1863, bears the national coat of arms with geographic features.
Previous
Next

The nation of Costa Rica (Spanish for “rich coast”) straddles the land bridge between North and South America. Because of this location and its wildly varied geography, the country hosts a remarkable collection of animals and plants, possibly as much as five percent of all the Earth’s species.

Costa Rica’s ecosystems include lowland rain forest, cloud forest, elfin forest (communities of small-stature plants), tropical dry forest, mangrove forests and swamps, and volcanic highlands. With groundbreaking environmental policies, Costa Rica has become a leader and exemplar in global conservation, and this attitude is amply represented on its stamps. Home to half a million species and one of the top 20 countries for biodiversity, Costa Rica often has reflected its environmental wealth in its stamp issues.

Costa Rica Scott 1, the ½-real blue stamp of 1863, imaginatively illustrates the country’s geography by depicting its coat of arms. In a high angle view, ships are shown to either side of a strip of land, presumably sailing on the Caribbean Sea and Pacific Ocean, respectively, with a steep volcanic-looking mountain in between.

During the past 30 years, Costa Rica has aggressively moved to protect its biodiversity. Between 1974 and 1978, the area covered by national parks and biological reserves expanded from three percent to 12 percent of the country.

Today, more than 25 percent of the country’s territory is protected area, a percentage that includes parks, preserves and private initiatives. The country has gained renown for its leadership in conservation, and is a popular destination for birdwatchers and ecotourists.

Birdwatching visitors have the opportunity to try to spot the more than 850 avian species that have been observed. Stamp collectors can take part by accumulating the numerous Costa Rican issues featuring avian fauna, such as the 1984 set of six stamps (Scott 287-292) depicting local birds. The first stamp of the set shows the quetzal, a spectacular bird with iridescent feathers ranging from green gold to blue violet, and a tail two feet long.

The rising consciousness of conservation values was reflected in stamps issued through the last decades of the 20th century, including three stamps in 1988 for the 17th General Conference for the Preservation of Natural Resources, and two in 1993 on the topic of the Protection of the Tropical Rain Forest.

More recent issues on the conservation theme include a trio of Flora and Fauna in National Parks stamps (Scott 586a-586c) in 2005 and four designs (609) of Fauna of National Parks in 2007. Both of these sets were still available for sale at the philatelic window at the beautiful central post office building in the capital city, San Jose, when I visited Costa Rica not long ago.

This unusual solid concrete building, which appears on Costa Rica Scott 120-121, was designed by a Catalan architect, Luis Llach Llagostera, and completed in 1917.

An astounding 1,500 orchid species have been recognized in Costa Rica. A lovely sheet of 10 Orchid stamps (Scott 599) was issued in 2007 to mark the Third World Orchid Congress.

Natural wonders, tourist opportunities and the climate drew me to Costa Rica for a two-week tour during the cold winter of the northeastern United States in 2014. I wanted to obtain stamps representing all the destinations I visited and was delighted with my success. Here is a brief recap of my travels.

Manuel Antonio National Park is a small park on the Pacific Ocean, where rain forest meets white-sand beaches. The park is very heavily visited but nevertheless remains a prime spot for diverse wildlife viewing. Among the animals I saw firsthand in one morning were white-headed capuchin monkeys, raccoons, sloths, porcupines, two species of iguanas and pelicans.

A wonderful companion to my tour of Manuel Antonio was a guided night walk in an adjacent private preserve. The velvety dark was filled with strange animal sounds, most often originating, as we got to observe, from insects and frogs. With a powerful flashlight, these were revealed in all their color.

Some of the diverse and wonderful frogs of Costa Rica appear on a 1986 series of Fauna and Flora stamps (Scott 377-385), which also portray bats. The bats, we found, were best observed in the daytime, asleep on the underside of leaves, as depicted on Scott 380.

Monteverde Cloud Forest is a private reserve with a remarkable history. In the 1950s, a group of Quaker families from the United States moved to Costa Rica because their beliefs did not allow them to support military spending or war. Their new home was an attractive destination because Costa Rica had just abolished its army.

The new arrivals protected the upland forests near their farms in order to preserve their watershed. Only gradually was it realized that these green, mountainous cloud forests were a treasure trove of animal and plant species, including the rare golden toad.

A grassroots movement of citizens and scientists from Costa Rica and around the world have collaborated to expand protection for the green garden of Monteverde. A 2009 stamp (Scott 630e) honors the preserve as one of a set of seven National Parks stamps (630a-630g). The set includes three of the four parks I visited. The Monteverde stamp shows a mountain stream, mossy ledges and lush growth.

The steep mountainsides of Monteverde are filled with giant trees loaded with vines, air plants, mosses, lichens, orchids and growing things of all kinds. Trails in the reserve are easy grades and well-marked. Bird life we witnessed included the fabled quetzal and multiple and abundant species of hummingbirds, as well as large forest animals including tapir and coati.

Arenal Volcano was once thought to be dormant, but began a series of fierce and deadly eruptions in 1968.
The volcano and surrounding area were set aside as a park in 1991, protecting not only new lava flows and burnt land but also pristine primary forests.

Arenal is a popular destination due to its numerous hot springs, waterfalls and, for some years, brilliant nocturnal displays of lava (which no longer occur).

Arenal appears on two stamps: as one (Scott 577a) of a set of three 2004 stamps depicting active volcanoes in the country, and as the first stamp (630a) in the 2009 National Parks set. The 2004 Arenal stamp, featuring an aerial view of the mountain, is still available at post offices and is justly popular with tourists.

Chirripo National Park is a large, relatively inaccessible preserve along the mountain range between Guatemala and the Andes. It takes in a cross-section of ecozones from 3,300 feet to the summit of Cerro Chirripo, the highest point of Costa Rica, at 12,530 feet. The long trek to the summit reveals distant views of volcanoes, peaks in Panama and both oceans.

The Cerro Chirripo stamp (Scott 630c) in the 2009 National Parks set shows the highlands along with a deep lake, all that remains of ancient glaciers. Chirripo National Park remains a stronghold for the natural world. While visiting there, I was shown photos from automatic cameras set in place after dark. Along the trails I had been traveling, a puma and her cubs had made a nighttime passage.

We can hope that Costa Rica will have continued success with its park and refuge system. With luck and effort, it will continue as a great tourism destination and as a prime source of income for the country. Costa Rica educates many students from other Latin American countries in tourism, and also serves as an inspiration in good public policy.

Even better, we can hope for many more stamps featuring the parks and wildlife of this fascinating country.