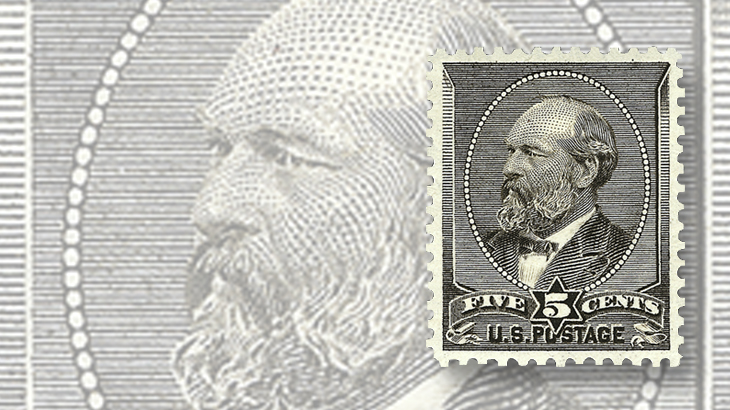 A 5¢ stamp honoring President James A. Garfield was issued in 1882. Garfield was shot by an assassin the year before and died several weeks later.

James Abram Garfield, the 20th president of the United States, was born Nov. 19, 1831, in a log cabin near the village of Orange, Ohio, in Cuyahoga County.

Garfield was the youngest of five children in a very poor family. His father died in 1833, and his mother struggled to support the family.

A gifted student, Garfield graduated from Williams College in 1856 and accepted a teaching position before entering politics. He was elected to the Ohio legislature as a Republican in 1859 and served until 1861. Strongly opposed to slavery, Garfield was commissioned as a colonel in the Civil War and was promoted to brigadier general following his success in the 1862 Battle of Middle Creek in Eastern Kentucky, making him the youngest general in the Union Army.

Garfield was elected to the House of Representatives and served for 18 years before he was nominated as the Republican candidate for president. With Chester A. Arthur of New York as his running mate, Garfield defeated the Democratic candidate, another Union general, Gettysburg hero Winfield Scott Hancock. The election was close in terms of the popular vote, but Garfield won the advantage in the Electoral College.

As his presidency began, Garfield sought to stabilize the economy and promote the enactment of education reforms that could benefit black Americans. He also forced an investigation into allegations of corruption at the upper levels of the U.S. Post Office Department.

However, Garfield, who was not yet 50 years old, would die just months after his inauguration. At a Washington train station on July 2, 1881, Garfield was shot by an embittered office-seeker who had been denied a coveted government position. Garfield’s wounds were compounded by infection; the president suffered for weeks before he died on Sept. 19.

The nation united to mourn its fallen leader, and Garfield was memorialized the following February on a 5¢ yellow brown stamp (Scott 205). Several additional stamps honoring the president were issued into the 1930s.