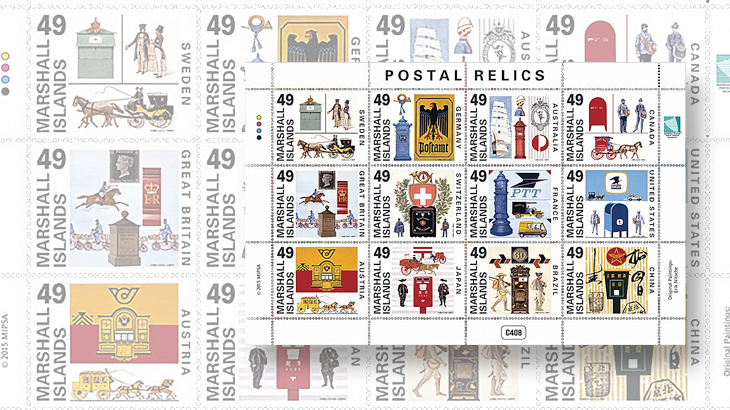 A pane of 49¢ stamps issued by the Marshall Islands shows public mailboxes of 12 countries. The United States Postal Service mailbox is pictured on the stamp on the far right in the middle row of this pane called “Postal Relics.”

Public mailboxes of the United States and 11 other countries are pictured on new stamps from the Marshall Islands.

The stamp representing the United States is on the far right in the middle row. The U.S. Postal Service logo used from 1970-93 is shown at the top of the stamp, with a horse-drawn vehicle and a postal jeep on either side of the logo.

Shown on the bottom half of the design are images of 19th- and 20th-century letter carriers with a mailbox in between them.

Stamp-on-stamp designs are included on the stamps representing postal service in Great Britain and Brazil.

The stamp for Great Britain is on the far left in the center row. The Penny Black, the world’s first postage stamp, is pictured at the top of the design.

Issued in 1840, the Penny Black (Scott 1) is celebrating its 175th anniversary this year. Several recent stamps have included stamp-on-stamp designs in recognition of this anniversary. This is the second one from the Marshall Islands this year. The first was in a souvenir sheet issued May 1.

Although Great Britain is known for its iconic red mailboxes, called pillar boxes, the stamp shows an earlier freestanding mailbox of the type developed by Anthony Trollope and first erected in London in 1855.

The stamp for Brazil shows the 60-reis denomination (Scott 2) from that South American nation’s first issue, the Bull’s Eyes of 1843.

Starting in the upper left, the other countries represented on this pane of stamps are Sweden, Germany, Australia, Canada, Switzerland, France, Austria, Japan, and China. Zoe Seemel designed the stamps, using artwork by Erik Nitsche. Pioneer Printing of Cheyenne, Wyo., printed the stamps.