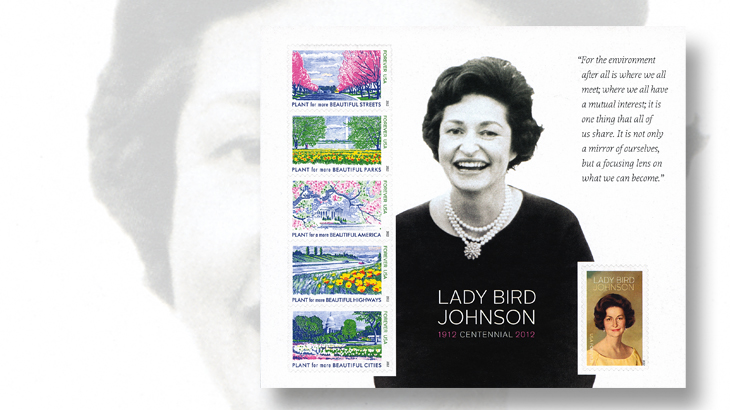 The 2012 Lady Bird Johnson pane of six stamps. The variety without die cuts (Scott 4716g) is in strong demand in mint never-hinged condition and is a good buy at the 2016 Scott Specialized Catalogue of United States Stamps and Covers value.

Claudia Alta Taylor, born Dec. 22, 1912, in Karnack, Harrison County, Texas, was destined to grow up to become “Lady Bird” Johnson, the wife of Lyndon Baines Johnson, the 36th president of the United States. As First Lady, she started the Society for a More Beautiful National Capital, a beautification project. The main thrust of the program was the planting of millions of flowers around the capital city.

She was also instrumental in the passage of the Highway Beautification Act, which put restrictions on billboards and encouraged the planting of wildflowers along highway roadbeds. In connection with these programs, the U.S. Post Office Department issued a 5¢ Jefferson Memorial and Cherry Blossoms stamp (Scott 1318) in 1966 and a set of four se-tenant 6¢ Beautification of America stamps (Scott 1365-1368) in 1969.

The former First Lady died July 11, 2007. To commemorate her life, the U.S. Postal Service issued a pane of six nondenominated (46¢) stamps (Scott 4716) on Nov. 30, 2012. Five of the stamps recapitulate the designs of the earlier stamps, while the sixth features a portrait of the First Lady. Uncut press sheets without die cuts were also produced.

The 2016 Scott Specialized Catalogue of United States Stamps and Covers values the pane of six without die cuts in mint never-hinged condition at $15. There is a great demand for this pane in the aftermarket, with examples selling at $8 wholesale and up to twice that at retail. If you find the pane at Scott catalog value, it would be an excellent buy.