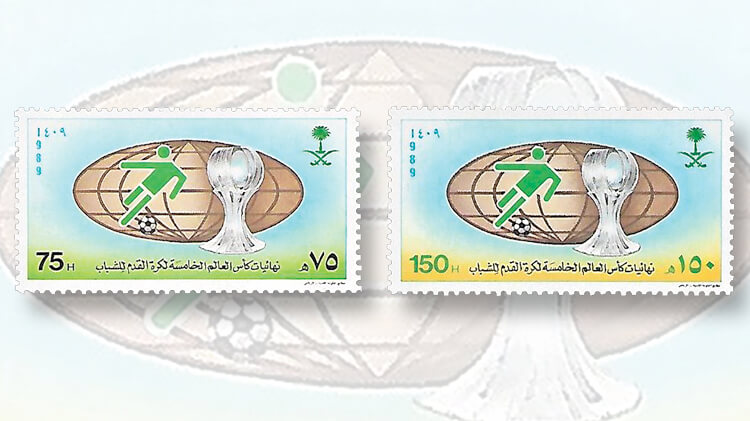 Saudi Arabia issued two stamps in 1989 to commemorate the FIFA World Youth Championship in soccer. The championship games were played in stadiums in Riyadh, Dammam, Jeddah, and Taif.

To celebrate the occasion, the Saudi government issued a set of two commemorative stamps on Feb. 16. The denominations are 75 halalas and 150h (Scott 1094-1095).

In the grade of very fine, a mint never-hinged set is valued at $5 and a used set at $1.90 in the 2017 Scott Standard Postage Stamp Catalogue.

The Directorate General of Posts designed the stamps. The Government Security Printing Press in Riyadh printed them on unwatermarked paper in sheets of 50 stamps plus two inscribed labels.  The stamps are perforated gauge 12. A total of 500,000 sets were printed

Both denominations in this set are multicolored, rectangular in shape, and share the same attractive design.

Shown in the center background of the stamps is a brown globe with longitude and latitude lines running through it. To the center left is the outline of a person, in green, playing soccer. To the center right is the winner’s cup, or trophy, for the event.

The national Saudi emblem, a palm tree above two crossed swords, is pictured in the top right corner. The top left corner shows the lunar year “1409” in Arabic and the Gregorian year, “1989,” in English. Both years share the number “1.”

The denomination and currency appear in the two bottom corners, Arabic at right and English at left. In between is the Arabic for “The fifth soccer world cup finals for youth.” In the right margin below the design is the Arabic text for ”Government Security Printing Press-Riyadh.”

He made sure that plenty of money was set aside in the state’s general budget to build several sports arenas in various provinces. These arenas could facilitate different sports other than just soccer.

The king wanted each facility to be worthy of international competitions.

The kingdom has several sports arenas of international standard, and Fahd was proud of Saudi Arabia’s victories in both the Asian Cup and the Gulf Countries Cup.

Because of Saudi Arabia’s first-class sports facilities, it became the proud sponsor of the fifth world youth soccer cup competitions.

These competitions brought together 16 teams from around the world.

The stamp set is plentiful and inexpensive to acquire. If you are a sports fan or a collector of stamps depicting sports, then you definitely need this set for your collection.