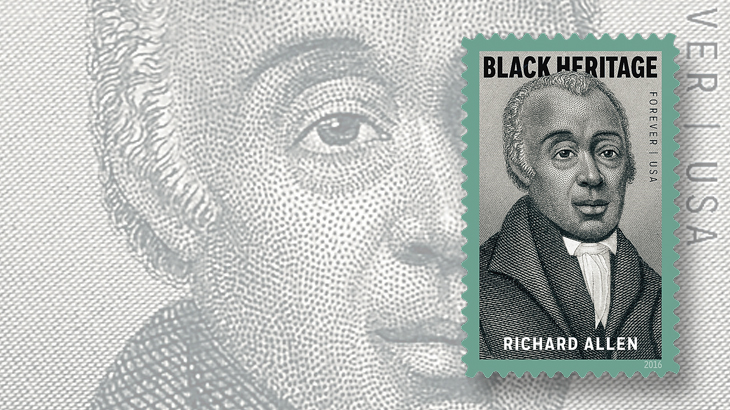 Richard Allen, founder and first bishop of the African Methodist Episcopal church, will be honored Feb. 2 on the 39th stamp in the United States Black Heritage commemorative series.

A forever stamp will be issued Feb. 2 to commemorate Richard Allen (1760-1831), an important figure in the United States abolitionist movement and the founder and first bishop of the African Methodist Episcopal church.

The stamp will be issued with a first-day ceremony scheduled for noon at the Mother Bethel A.M.E. Church, 419 S. Sixth St. (at Lombard) in Philadelphia, Pa., the site of the first A.M.E. church established by Allen.

The Postal Service reports that Josh Colin, USPS area operation vice president for the Eastern area, will be the dedicating official.

The stamp will be issued in a pane of 20 as the 39th issue in the U.S. Postal Service’s Black Heritage commemorative series. The stamp additionally commemorates the 200th anniversary of Allen’s founding of the A.M.E. Church, described by the USPS as “one of the most important institutions in African-American life.”

The central stamp design, according to the Postal Service, is a portrait of Allen taken as a detail from an 1876 print titled Bishops of the A.M.E. Church. The print, which includes portraits of 10 other bishops and six historical vignettes, is from the collection of the Library Company of Philadelphia.

The stamp was designed by USPS art director Greg Breeding.

The black postmark shows a rendition of Philadelphia’s Mother Bethel A.M.E. Church, which was founded by Allen in 1794, and includes the phrase “Black Heritage.”

The digital color postmark, also with the phrase “Black Heritage,” includes a circular element reproducing a detail from a stained glass window at Mother Bethel A.M.E. Church, with a portrait of Allen and the words “Founder 1760-1831.”

According to the African Methodist Episcopal Church, “Over 40,000 people of good will petitioned the United States Postal Service to create a stamp honoring Bishop Richard Allen, a true American whose life and legacy has impacted millions throughout the world. As one of America’s strongest early advocates for racial equality, Bishop Richard Allen’s extraordinary life shows a man deeply devoted to his religion, his community, and his desire to expand the rights of African Americans.”

Richard Allen was born Feb. 14, 1760, into a family owned as slaves by Philadelphia lawyer and plantation owner Benjamin Chew.

The family was sold to a Delaware farmer named Stokeley Sturgis, who later sold Allen’s mother and three of her children. Allen, a brother and a sister remained with Sturgis, whom Allen described as “a very tender, humane man.”

Despairing for his circumstances, Allen found solace and hope in Methodist church revivals, which Sturgis allowed his slaves to attend.

Allen also attended Methodist religious classes, learned to read and write, and began to preach himself.

Sturgis agreed to allow Allen to purchase his freedom, which Allen did within three and a half years, at age 23.

He found employment chopping wood, making shoes, and driving a wagon during the Revolutionary War, and also made time for preaching the Gospel during his travels.

As the congregation at St. George’s grew, restrictions were placed on the black members as to where they were allowed to sit and pray.

When Jones was ordered to leave his seat during a service and move to another area of the church, the black members of the congregation, including Allen, walked out for good.

Allen helped Jones establish an Episcopal church in Philadelphia, and Allen then broke ground on a new Methodist church at Sixth Street and Lombard, moving an old blacksmith shop to the location and converting it into a place of worship.

The following year, the two men published a rebuttal to an account of that tragedy that portrayed some of the black aid workers negatively. Allen and Jones became the first black writers to obtain a copyright for a publication.

Allen also published a pamphlet condemning the practice of slavery.

He became the nation’s first black Methodist Episcopal minister when he was ordained by a longtime supporter, Methodist Bishop Francis Asbury, in 1799.

In 1816, Allen called for a meeting of other black church leaders, who gathered together to establish the independent African Methodist Episcopal Church.

Allen was named the first bishop, and the church he established came to be known as Mother Bethel.

Dennis C. Dickerson, on the website of the A.M.E. Church, wrote: “Today, the African Methodist Episcopal Church has membership in twenty Episcopal Districts in thirty-nine countries on five continents. The work of the Church is administered by twenty-one active bishops, and nine General Officers who manage the departments of the Church.”

While leading the church, Allen and his wife Sarah also established a station on the Underground Railroad, aiding escaped slaves seeking freedom in the north by hiding them in the basement of Mother Bethel. Allen supported groups working to end slavery, and with Absolom Jones he petitioned Congress to end the practice.

Allen also organized members of the black community to defend Philadelphia during the War of 1812.

As of this writing, technical details were not made available.