U.S. overprints for Guam postal service worth looking out for: Tip of the Week 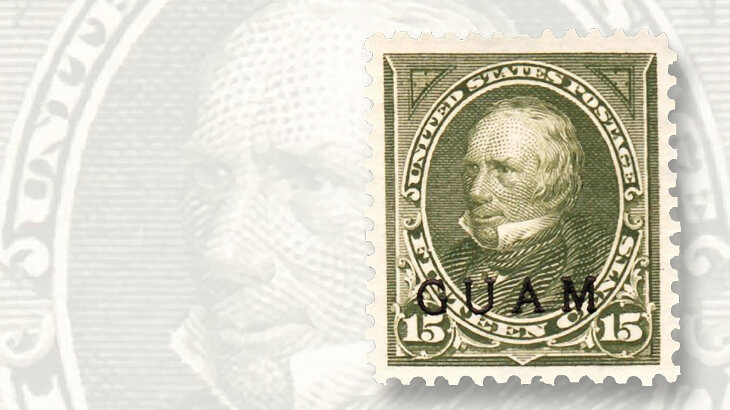 One of four United States territories, Guam occupies an island in the northwestern Pacific Ocean in the Marianas group. A former Spanish colony, it was captured by the United States June 20, 1898, and formally ceded in the treaty that ended the Spanish-American War.

Postal service for Guam was administered by the Navy Department from July 7, 1899, to March 29, 1901. During this period, U.S. stamps overprinted “GUAM” were used. On March 30, 1901, the Post Office Department assumed responsibility for postal service, and regular U.S. postage stamps were authorized for use. The Guam Guard Mail stamps are a different story that we won’t go into at this point.

With the exception of the 1¢ Franklin and 2¢ Washington stamps (Scott 1 and 2), the stamps overprinted in 1899 are not plentiful. Only 20,000 of the 5¢ blue U.S. Grant stamps were issued, and only 3,000 of the $1 Commodore Perry stamps (5 and 12). When you consider that 15 percent to 20 percent of the stamps issued were in grades of very fine or better without straight edges, and that a majority of the unused stamps have been hinged, the number of available examples in grades of VF or better and in mint never-hinged condition must be miniscule.

Read previous tips of the week:

The bizarre but in-demand stamps of King Farouk’s Egypt