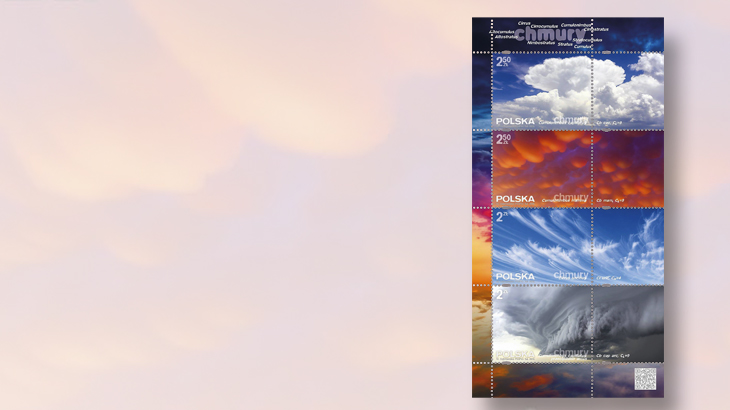 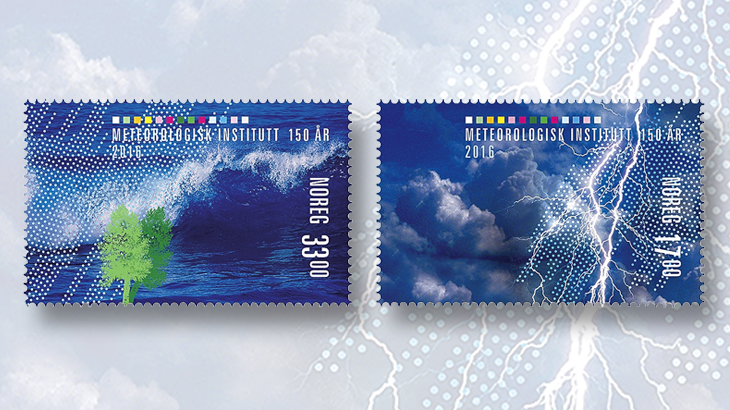 Norway issued two stamps June 10 to mark the 150th anniversary of the Norwegian Meteorological Institute. One stamp depicts a wave and trees, and the other shows a thunderstorm.
Previous
Next

Founded Dec. 1, 1866, the institute provides weather forecasts for the public, aviation authorities and military purposes for Norway and the adjacent seas and polar areas. According to its website, the institute also focuses on research and development.

In announcing the new stamps, Halvor Fasting, stamp director for Norway Post, said: “The weather means a lot to Norwegians, and few institutions have been as important for a society as the Norwegian Meteorological Institute.”

The institute has its headquarters in Oslo and also has two additional weather forecasting centers in Bergen and Tromso.

Stamp designer Bruno Oldani based the designs on his own photographs.

The 33-krone stamp pictures a wave crashing in the background and a green tree in the foreground. The 17kr stamp shows lightning and clouds during a thunderstorm.

Joh. Enschede of the Netherlands printed the stamps by offset in sheets of 50.

Poland shows storm and other types of clouds on four stamps issued June 15.

The stamps are se-tenant (side-by-side) in a pane of four with the designs extended onto perforated labels.

The 2-zloty stamp at the bottom of the pane features the storm clouds.

More specifically, these clouds are Cumulonimbus capillatus praecipitatio arcus, according to the inscription at the bottom of the stamp design. This stamp, like the other three in the pane, also includes the inscription “chmury,” which is Polish for clouds.

Puffy, white Cumulonimbus capillatus clouds are shown on the 2.50zl stamp at the top of the pane.

Pictured below them are pinkish Cumulonimbus mamma clouds on another 2.50zl stamp.

In The Cloudspotter’s Guide: The Science, History, and Culture of Clouds by Gavin Pretor-Pinney, the founder of the Cloud Appreciation Society, wrote that mamma clouds, named for the Latin word for “breasts,” appear on the underside of a number of different cloud types, adding that they are at “their most impressive when wed to a mighty cumulonimbus.”

The other 2zl stamp in the pane, second stamp from the bottom, features the high-level Cirrus uncinus clouds. The word “uncinus” is Latin for “hook,” describing the shape on the tail of these clouds.

Marzanna Dabrowska designed the stamps. They were printed by offset by the Polish Security Printing Works, known by its abbreviation PWPW.

Read more about new stamps of the world: