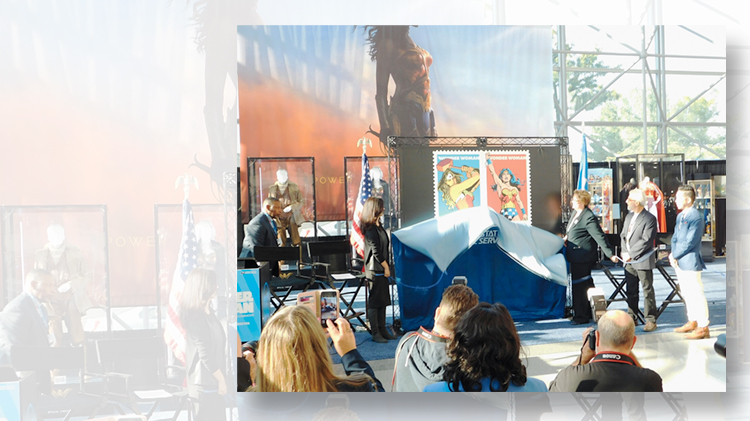 The unveiling of the Wonder Woman stamps during the ceremony at the Javits Center in New York City. Showcases in the background house original TV and film costumes, and a Wonder Woman poster hangs overhead. 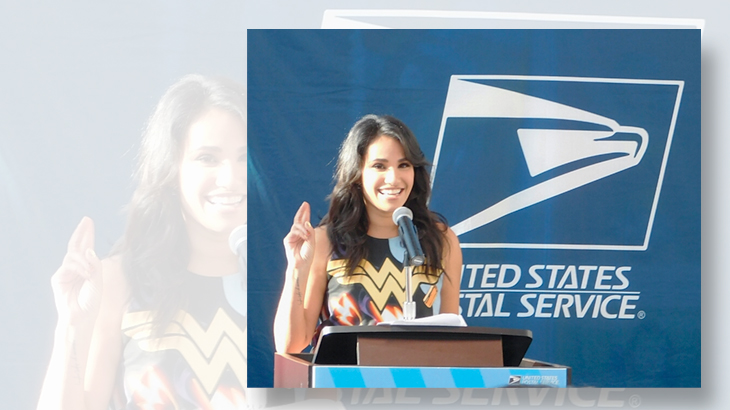 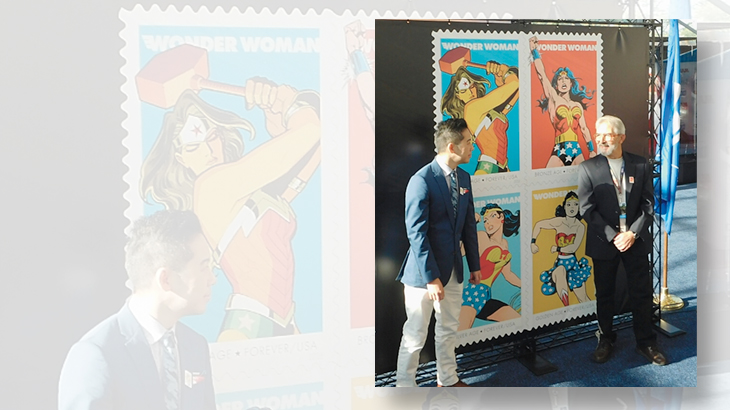 Wonder Woman herself was not there, but Wonder Woman fans and friends were out in full force for the Oct. 7 first-day ceremony welcoming the four new Wonder Woman forever stamps. The stamps, in a pane of 20, commemorate the 75th anniversary of the popular DC Comics superhero.

The ceremony began at 9 a.m. in the outer lobby of the Jacob K. Javits Convention Center in New York City. Admission to the ceremony was limited to just a few dozen who had reserved seats in advance, while thousands upon thousands of comic fans lined up outside the building awaiting entrance to the annual New York Comic Con taking place in the convention center.

Ceremony visitors were escorted to a cordoned-off area dedicated to Wonder Woman. On display were an original costume from the Wonder Woman television series starring Lynda Carter that aired from 1975 to 1979, and four costumes worn by actors in the Wonder Woman film starring Gal Gadot that is now scheduled for release June 2, 2017. Hanging above the stage was a huge promotional image of Gadot for the upcoming movie, and nearby showcases included lots of Wonder Woman memorabilia.

Four young girls from the Girls Inc. mentoring and educational program in New York were dressed in their best Wonder Woman outfits, writing letters during the ceremony to women who have inspired them.

Artwork adapted for the other two stamps was originally created by Jon L. Blummer (1904-55) for the Golden Age stamp, and Irving Novick (1916-2004) for the Silver Age stamp.

Christie Marston, the granddaughter of Wonder Woman creator and writer William Moulton Marston, was also present and introduced to the enthusiastic crowd.

The Wonder Woman stamps are now on sale at post offices nationwide.