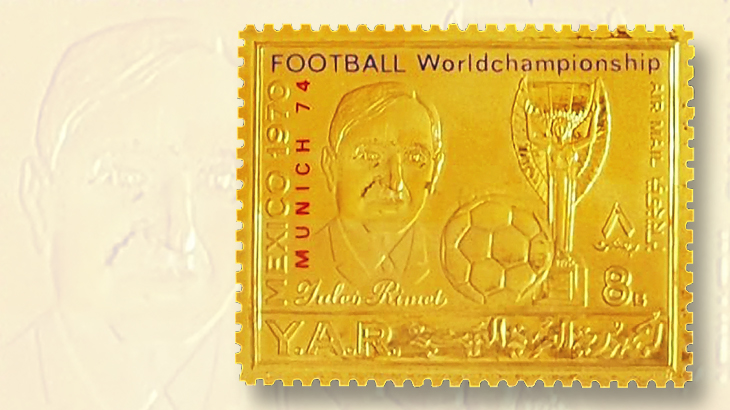 Tip of the week – By Henry Gitner and Rick Miller

Gimmicky stamps began appearing in large numbers in the 1960s: stamps in odd shapes, stamps made of nontraditional materials, stamps with holograms or other unusual features.

Gimmicky stamps are alive and well today. Some collectors like them, but many don’t have much use for them. “Dunes” is a pejorative name for stamps issued mainly for sale to collectors by semi-independent or unrecognized Arab entities, usually sold canceled to order. Although listed in the German-language Michel catalogs, many of these issues have never been listed in the Scott Standard Postage Stamp Catalogue. Having said all that, our tip this week could be classified as a gimmicky Dunes stamp.

The Yemen Arab Republic (informally known as North Yemen) was located near the west end of the southern coast of the Arabian Peninsula. It existed from 1962 to 1990, when it joined the People’s Democratic Republic of Yemen to form the present failed state of the Republic of Yemen.

During its lifetime, the Yemen Arab Republic was a prolific issuer of gimmicky stamps, many produced on gold foil. Most of these are not listed in the Scott Standard catalog.

We aren’t saying go out and pay $230 for one of these stamps. We are saying that if you are going through lots or collections you have purchased, don’t assume gimmicky Dunes stamps are without value. You might find a gem.