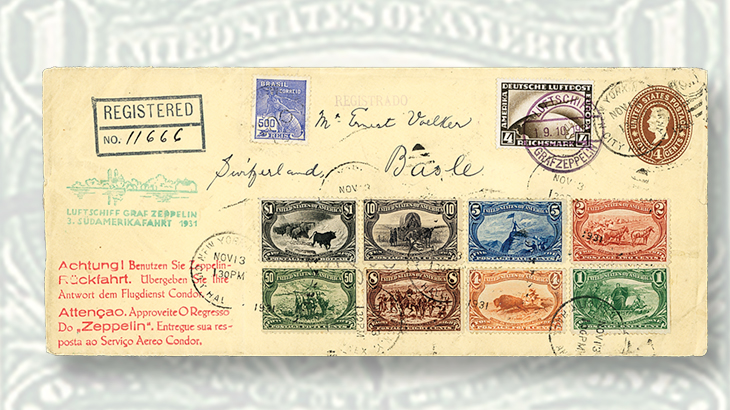 This very evidently philatelic cover in the Harmer-Schau sale at Stampshow — a 1931 Zeppelin cover created using a 4¢ Lincoln envelope and bearing a set of the 1898 Trans-Mississippi stamps up to the $1 denomination — sold for $2,875. 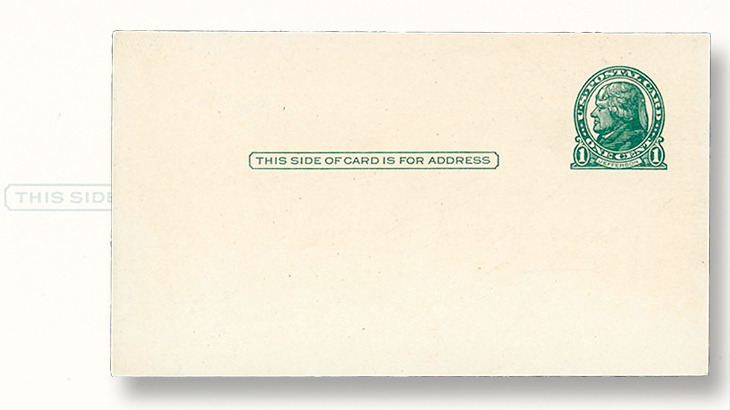 Called “the second most expensive listed postal card item and an important item for any advanced collector or exhibitor,” this blank, unused 1916 1¢ Jefferson postal card printed on gray, rough-surfaced stock sold for $19,550 at the Harmer-Schau auction h 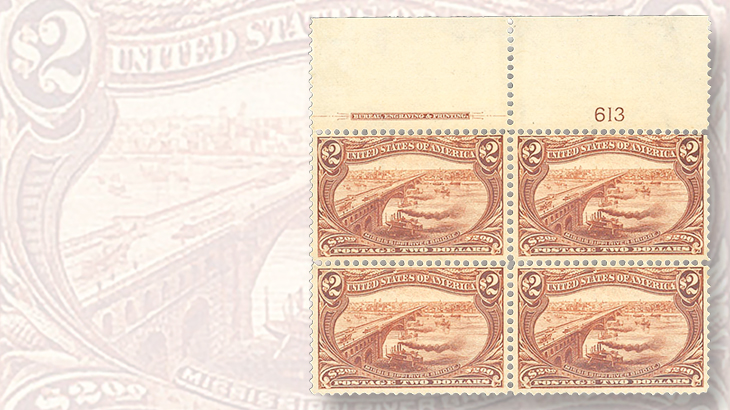 Harmer-Schau Auction Galleries also conducted a sale during Stampshow in Richmond, Va. Among the highlights was this lovely plate block of four of the 1898 $2 Trans-Mississippi stamp, which went to a new owner for $48,875.
Previous
Next

One of the standout lots, among several scarce postal cards, was an unused variety printed during World War I.

In 1916, the United States was not yet formally a participant in the war, but the economic difficulties of the global conflict had begun to hit home.

In particular, there were paper shortages that resulted in a temporary switch to a gray, rough-surfaced card stock for printing then-current 1¢ Jefferson postal cards.

However, the details of Jefferson’s likeness did not turn out well on the rougher stock, so the die was recut, yielding a type II. Shortly after printing commenced, however, regular stock became available again, and the emergency printing ended.

Called “the second most expensive listed postal card item and an important item for any advanced collector or exhibitor,” the example in the Harmer-Schau sale fetched $19,550, including the 15 percent buyer’s premium added by the firm to all lots.

A lovely and rare plate block of the $2 Mississippi River Bridge at St. Louis stamp (Scott 293), from the 1898 Trans-Mississippi Exposition issue, was described as extremely rare.

The $2 is the top denomination from the series, and the entire print run of this stamp reportedly took place in one day, June 3, 1898 (its earliest documented date of use is about three weeks after that).

The block in the Harmer-Schau sale, with imprint and plate number 613 in the wide top margin, was apparently being offered for the first time in many decades. Very lightly hinged with some minor perforation reinforcement, it sold for $48,875.

Collectors of postal history place a premium on commercial covers or covers without any obvious philatelic intent on the part of the sender.

Philatelic covers, which have usually been concocted to yield a collectible trophy, are nonetheless appealing and can still be valuable, especially when they are eye-catching or rare.

A very evidently philatelic cover in the Harmer-Schau sale provided a fun illustration of this: a 1931 Zeppelin cover created using a 4¢ Lincoln envelope (Scott U371) and bearing a set of the Trans-Mississippi stamps up to $1, mailed 33 years after they were issued.

The cover began its journey with a German 4-mark Zeppelin stamp canceled aboard the airship on its third flight to South America. From Pernambuco, Brazil, it was remailed via Rio de Janeiro to New York with a Brazil 500-reis definitive (regular-issue) stamp.

In New York, someone neatly lined up and applied the eight Trans-Mississippi stamps (Scott 285-292), re-registered the letter, and forwarded it to Switzerland. This unusual piece of philatelic whimsy sold for $2,875.