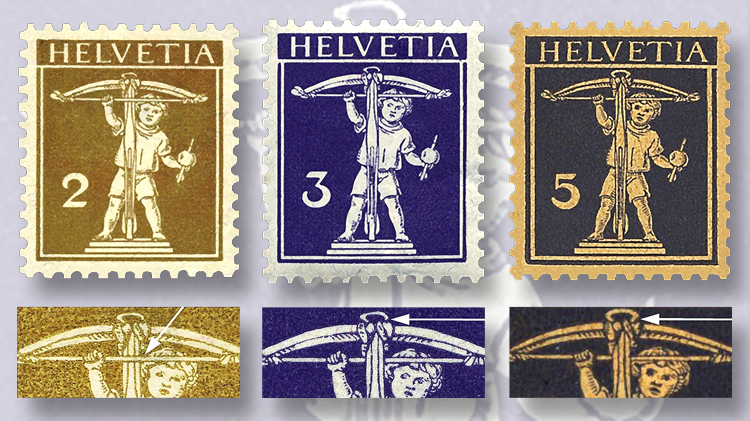 The three types of Switzerland’s Tell Boy design. Type I (left) shows the bow string on the wrong side of the stock. Type II (center) corrects the design error, and on type III the loop on top of the stock is thicker and more symmetrical. 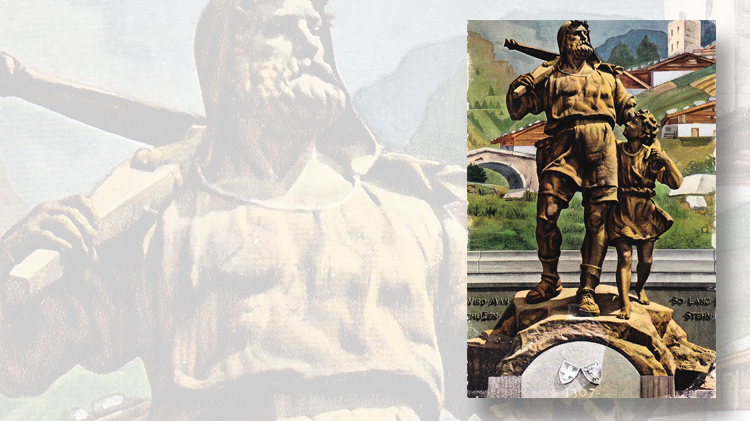 The statue of William Tell and his son in the town square of Altdorf, Uri, Switzerland. The statue, by Richard Kissing, was erected in 1895. 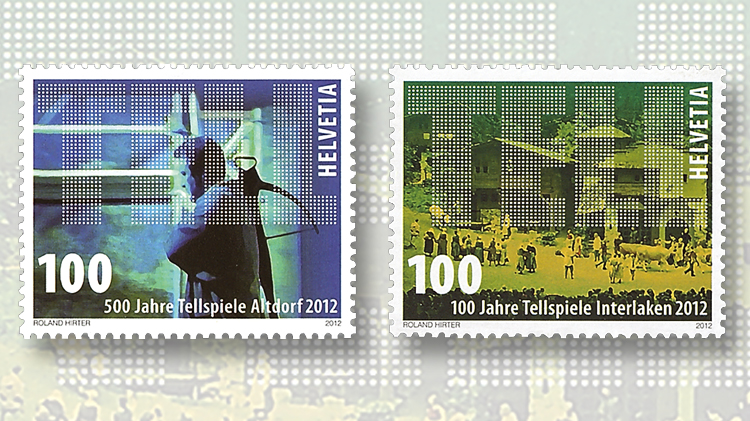 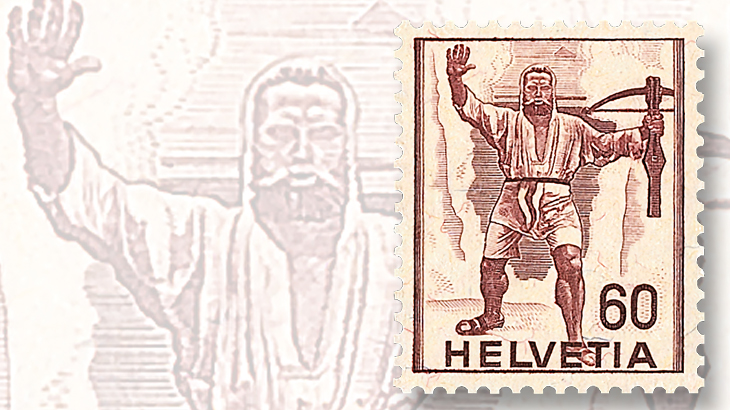 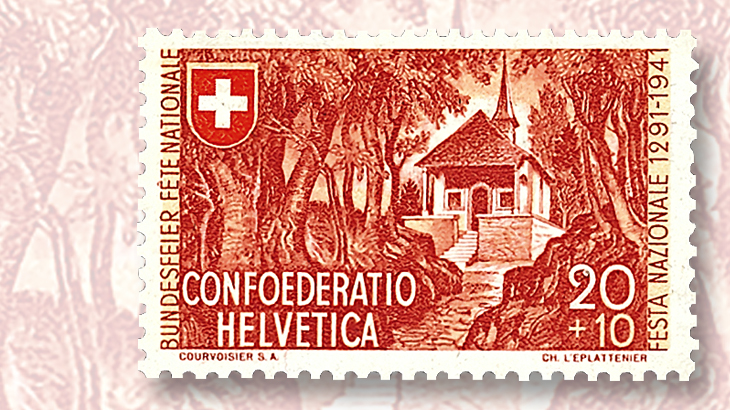 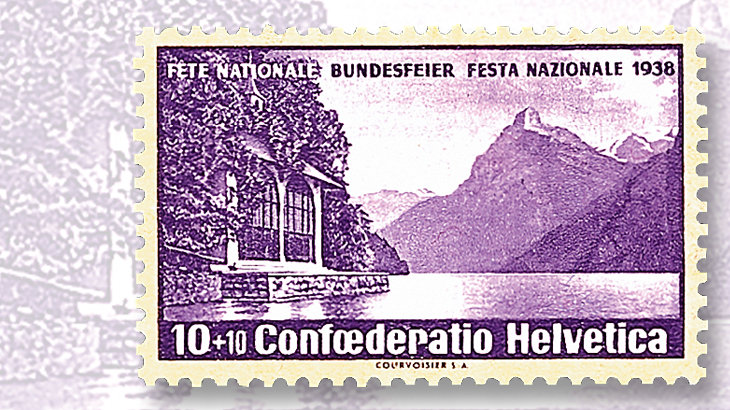 This 1938 10-centime+10c Pro Patria semipostal stamp shows the Tell Chapel on the site where William Tell jumped from the boat to escape being taken to the dungeon. 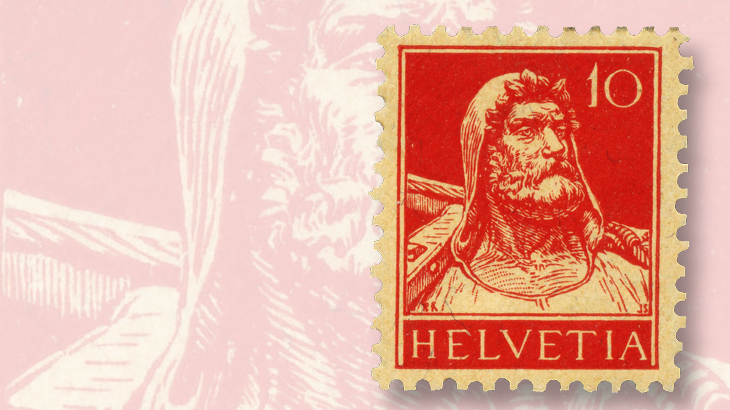 William Tell made his debut on a series of stamps issued in 1914. Shown here is the 10c denomination. 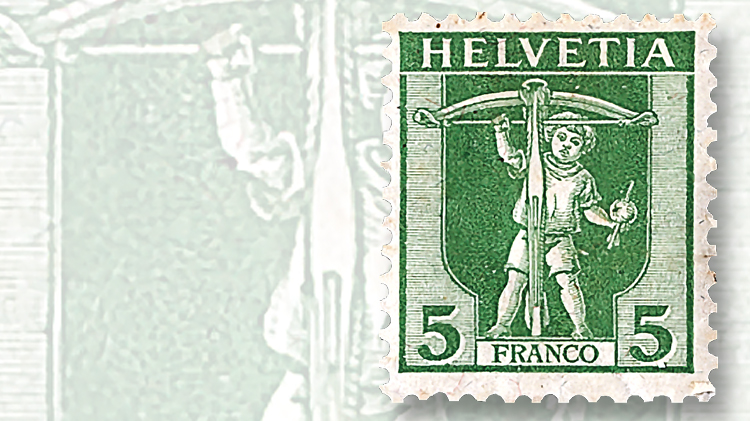 The public objected to the original Tell Boy design that appeared on a low-denomination definitive series in 1907.
Previous
Next

Switzerland is known as the land of William Tell. His story, historically accurate or not, is an important part of the Swiss heritage, even today. To refresh your memory of his story, here’s a summary.

In the early 14th century, the Habsburg emperors of Austria were seeking to control what is now the canton of Uri.

Hermann Gessler (also known as Albrecht or Gerhard Gessler), the newly appointed Austrian vogt (bailiff) of the Uri town of Altdorf, raised a pole in the village square, put his hat on top of it, and demanded that all passersby bow to it as they walked by.

On Nov. 18 1307, Tell, visiting Altdorf with his young son, walked by the hat and refused to bow to it. He was arrested, and Gessler, intrigued by Tell’s famed skill with the crossbow but resenting his defiance, devised a cruel punishment. Tell and his son Walter were to be executed.

However, if Tell could shoot an apple off the head of his son in a single attempt, Walter’s life would be saved. Tell took a shot and split the apple.

Gessler noticed that Tell had taken two crossbow bolts from his quiver. Before Gessler released him, he asked why. Tell was hesitant to answer, but after Gessler promised that he would not kill him, Tell replied that had he killed his son, he would have killed Gessler with the second shot.

Gessler, furious with the revelation, ordered Tell taken, saying that although he had promised to spare his life, instead he would imprison him for the remainder of the expert bowman’s life.

Tell was put on Gessler’s boat to be taken to the dungeon in the castle at Kuessnacht.

A storm broke on the Lake of Lucerne, and the guards, fearing that their boat would sink, begged Gessler to remove Tell’s shackles so he could take the helm and save them. Gessler agreed, but once freed, Tell sailed the boat to a rocky place on the shore and leaped from the boat.

The site is now known as the Tellsplatte (“Tell’s slab”) and is the site of the Tell Chapel, shown on the first Switzerland Pro Patria stamp of 1938 (Scott B90). The 10-centime+10c stamp is pictured nearby.

The Pro Patria Foundation is a patriotic organization dedicated to the preservation of Swiss scenery, monuments, and historic buildings, particularly the country’s architectural gems.

Like the Pro Juventute Foundation (Switzerland Stamp Scene, Linn’s, Jan. 30), the Pro Patria Foundation issues a set of stamps each year to raise funds for its restoration and preservation efforts.

Figuring out where Gessler would go, Tell ran to Kuessnacht. When Gessler arrived, Tell killed him on the road between Immensee and Kuessnacht, now known as the Hohle Gasse, shown on a 1941 20c+10c Pro Patria stamp (Scott B111).

To commemorate the folk hero, a statue of William Tell and his son, by Richard Kissing, was erected in the town square in Altdorf in 1895. The statue is shown nearby on a postcard.

Tell has his place in the hearts of the Swiss as well as on Switzerland’s stamps. His son was first depicted on stamps in the low-denomination definitive series of 1907 (Scott 126-128). The public objected to the design, and a replacement series was issued in 1909.

During the stamps’ two-decade life, there were many changes in denomination, color, and paper. Let’s look at this series a bit more closely.

The series showing Tell’s son is known as the Tell Boy series. The stamps and enlargements of the distinguishing features of the three types are shown nearby.

The original design (type I) had the bow string on the wrong side of the stock, which would have made it impossible for William Tell to have fired a shot (Scott 146-148).

Tell Boy stamps with additional denominations, colors, and papers continued until 1930. Varieties with grilled gum appeared in 1933 (Scott 158a, 161b).

Beautifully engraved by Karl Bickel, the Historic Figures definitive series of 1941 includes a 60c stamp showing William Tell (Scott 271). The design is based on the 1896 oil painting of Tell by Ferdinand Hodler, which hangs in the Kunstmuseum in Solothurn.

Today there are theater productions of the Tell story (Tellspiele) both in Altdorf and in Interlaken.

Stamps were issued in 2012 to honor the 500th anniversary of the Altdorf Tellspiele (Scott 1455) and the centennial of the Interlaken Tellspiele (1456).

Tell’s story has been dramatized by Friedrich von Schiller in his 1804 play Wilhelm Tell, which was then turned into an opera by Gioachino Rossini in 1829.

The overture to this opera is most familiar to those of us who grew up listening to the Lone Ranger, because it was his theme song.