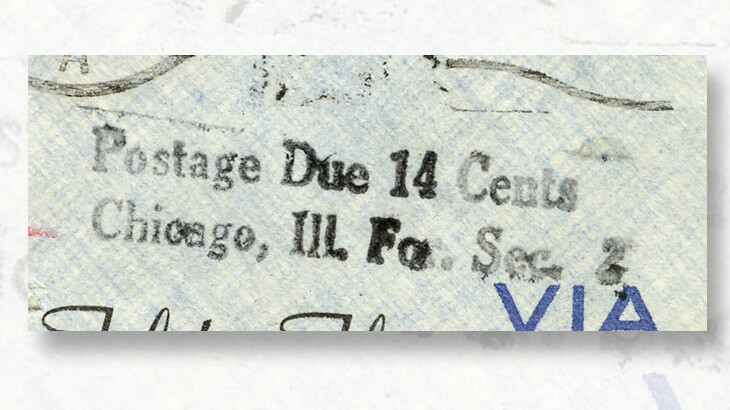 The “Postage Due 14 Cents” marking was added to the front of the cover in Chicago. 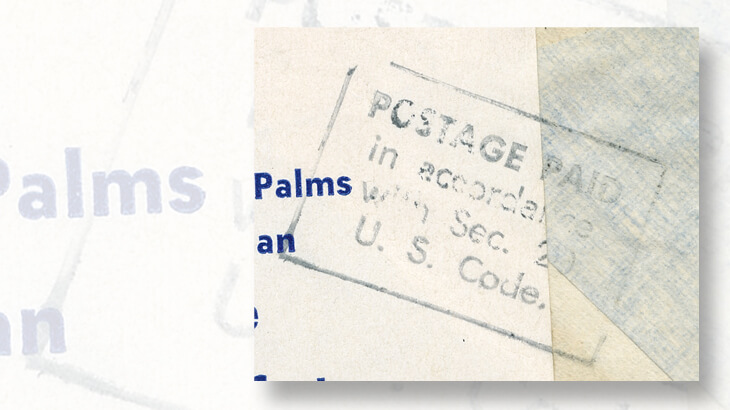 Despite the United States postage paid handstamp tying the “Cuba Libre” label on the back of the cover, it was determined to be short paid 14¢. 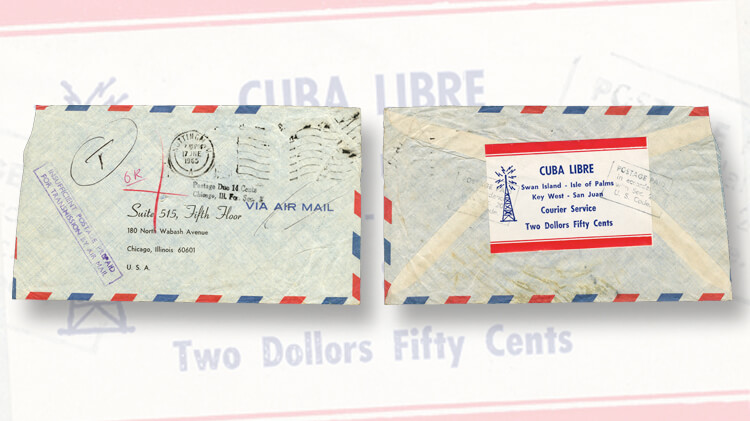 Shown back and front, this 1965 letter originated on Swan Island, near Honduras, the site of a U.S. broadcasting station that targeted Cuba. Routing of the letter was Swan Island to Jamaica to England, and then to the United States for delivery in Chicago
Previous
Next

The Swan Islands group is a pinprick on the map, situated off the coast of Honduras in the western Caribbean.

Its strategic location, not far from Cuba, and the fact that it was uninhabited make it a perfect choice for a radio station. This station was inaugurated in May 1960 with the objective of broadcasting anti-Castro content.

The rumor at the time was that it was a Central Intelligence Agency operation intended to the support the Bay of Pigs invasion. The United States Navy helped by building an airstrip that ran most of the length of the 1.8-mile long Great Swan Island.

The cover that is shown (front and back) nearby illustrates how mail from people who worked at the radio station was dispatched. The “Cuba Libre” label on the reverse documented payment for courier service from Swan Island to the United States.

The problem here is that this 1965 cover did not go directly to the United States. Based on other such covers I have seen, apparently the normal routing at the time was by way of Jamaica, where Jamaican postage was affixed.

In the case of the cover shown with this column, from Jamaica it was sent to England and then to the United States.

The cost was $2.50. On the label on the reverse, the word dollars is misspelled “dollors.” Note that the label is canceled by a boxed “POSTAGE PAID in accordance with Sec. 20, U.S. Code.”

That section of the postal regulations required that U.S. postage be paid on any letter carried outside the U.S. mail system that would have part of its journey via the U.S. Post Office Department.

If Jamaican stamps were affixed to this 1965 cover, they were not there when it reached England. There, Britain’s General Post Office marked it “Insufficient postage prepaid for transmission by air mail.”

I’m guessing that both the British and U.S. postal systems credited 5¢, the amount of first-class postage represented by the boxed message on the reverse.

The post office in Chicago marked the envelope “Postage Due 14 Cents” on arrival, which was less than the international airmail rate of 15¢ from England to the United States at the time. I don’t know what the rate calculation was.

Castro’s Cuba responded to the Great Swan Island radio operation by setting up a jamming station to block it, but it was successful only in the city of Havana.

Radio Swan remained on the air until May 1968, when the station closed down and its AM transmitter was sent to South Vietnam.