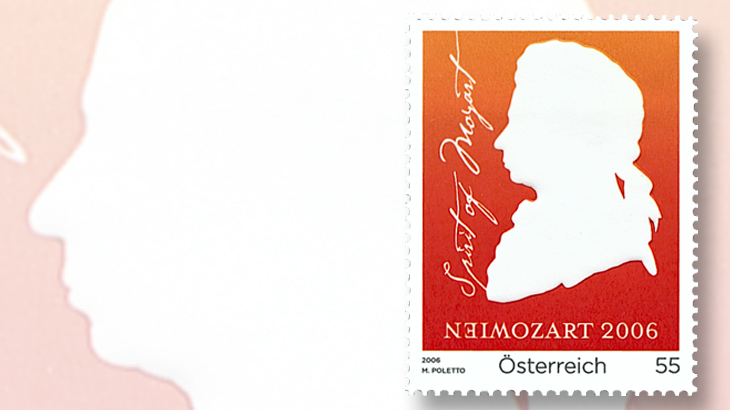 Austria issued this tribute to Wolfgang Amadeus Mozart in 2006 on the occasion of his 250th birthday.

Wolfgang Amadeus Mozart, one of classical music’s most celebrated composers, was born Jan. 27, 1756, in Salzburg, Austria, the son of Anna Maria Pertl Mozart and her husband, composer Leopold Mozart, who became a primary musical instructor for his gifted son. Anna gave birth to seven children, but only Wolfgang and his musically talented older sister Maria Anna (born in 1750) survived infancy.

Wolfgang exhibited extraordinary musical abilities at a very young age, composing music when he was just five years old. By the time he was eight, he had completed his first symphony, and his successful three-act opera, Mitridate, re di Ponto, was performed in Milan in 1770 when he was 14.

Three years later, Mozart was named court musician of Salzburg and began his immense output of music, including concertos, symphonies, string quartets, and more. He left Salzburg for Paris in 1778, and then moved to the Austrian capital, Vienna, in 1781. The next year, he married Constanze Weber, with whom he had six children, though only two survived infancy.

Mozart met and was influenced by the older composer Franz Josef Haydn, and it is believed that he also met and influenced the younger Ludwig van Beethoven when the German was an emerging 16-year-old musical prodigy.

Mozart’s prodigious output includes some of the most respected music in the classical repertoire. His more than 40 symphonies include the majestic Jupiter Symphony in C major (No. 41), and the lively Paris Symphony in D major (No. 31). His many operas include The Marriage of Figaro and Don Giovanni, and his Eine Kleine Nachtmusik is one of the most familiar and beloved serenades of all time.

After falling ill while in Prague in September 1791, his health deteriorated while working on his Requiem. He died on Dec. 5, 1791, at age 35. The cause of his death remains uncertain.

Mozart has been a popular subject on stamps from all over the world, including his native Austria, which celebrated the 250th anniversary of his birth with a €0.55 stamp issued Jan. 27, 2006 (Scott 2039).