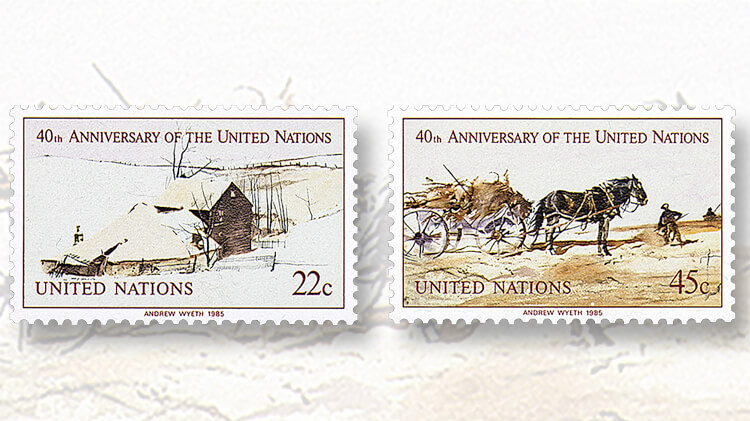 The United Nations chose two paintings by Andrew Wyeth to appear on stamps in 1985 to mark the world organization’s 40th anniversary: The Corner (1947) and Alvaro Raking Hay (1953). 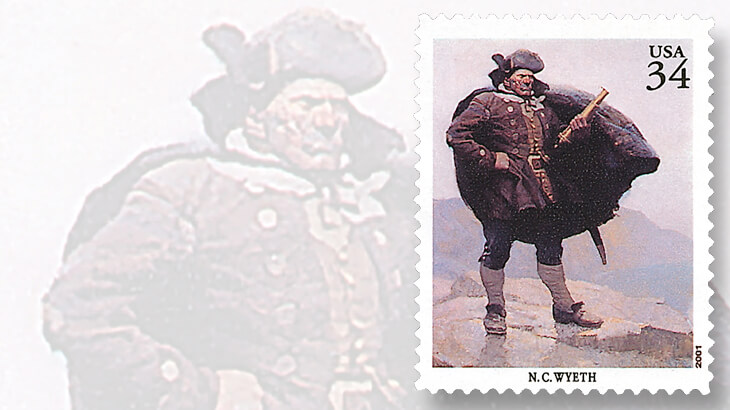 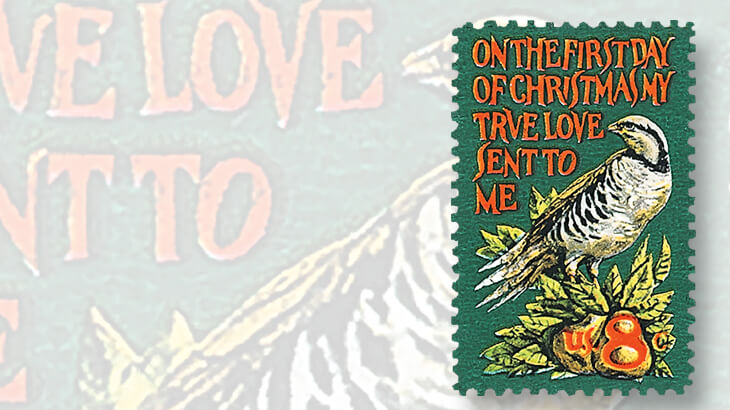 Andrew Wyeth’s son, James Wyeth, continues the family’s artist tradition. He was a member of the Citizens’ Stamp Advisory Committee in the 1970s and designed this 1971 8¢ Christmas stamp. 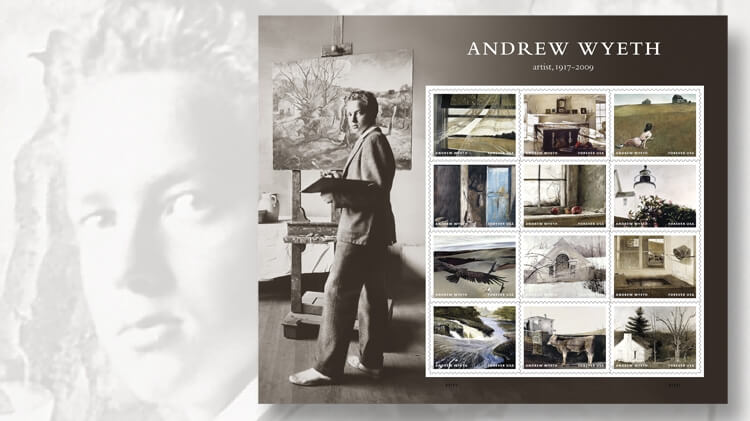 The full pane of Andrew Wyeth stamps features a dozen paintings created between 1942 and 2003. The photograph in the pane’s selvage shows Wyeth at work on a painting in his studio. 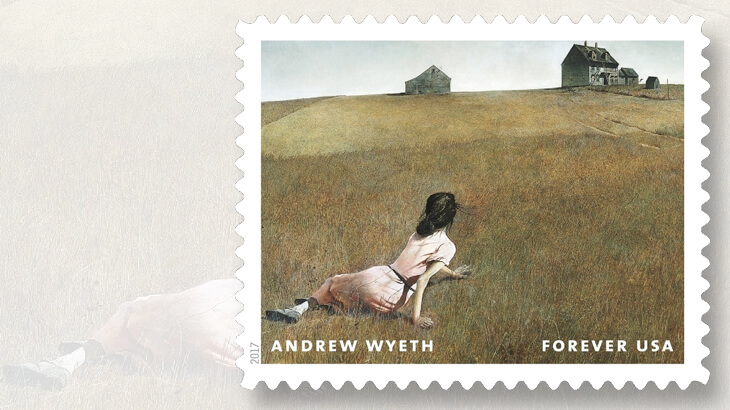 A pane of 12 forever stamps celebrating the art of Andrew Wyeth (1917-2009) will be issued July 12 in Chadds Ford, Pa. The full pane is pictured in the next illustration. The stamp shown here reproduces a detail from one of Wyeth’s most famous works, the 1948 tempera-on-panel Christina’s World.
Previous
Next

A new set of United States stamps pays tribute to one of America’s most highly regarded 20th-century artists, Andrew Wyeth.

The 12 nondenominated (49¢) forever stamps, which will be issued July 12, each show a different detail from one of Wyeth’s paintings.

The stamps will be issued in Chadds Ford with a ceremony at the Brandywine River Museum of Art. The ceremony is free and open to the public. Early reports identified a 10 a.m. start time, but the museum has posted that the ceremony will begin at 11 a.m.

More than 100 works by Wyeth will be exhibited in a career retrospective at the museum through Sept. 17.

Along with the 12-stamp pane, the U.S. Postal Service is offering press sheets of the Wyeth stamps consisting of nine die-cut panes and selling for face value at $52.92.

The paintings represented on the new stamps include three dating from the 1940s; most notably, Christina’s World, a large tempera on gessoed panel landscape from 1948 that is among Wyeth’s best-known works.

Now in the collection of the Museum of Modern Art in New York City, Christina’s World shows the figure of Anna Christina Olson in the tall grass of the foreground. A frequent early model for Wyeth, Olson was unable to walk because of a degenerative muscle disorder, and the painting shows her crawling through the grass toward a distant old house near Cushing, Maine.

Wyeth’s many paintings almost all involve subjects from either Cushing, where he made his summer home, or Chadds Ford.

The most recent artwork featured among these stamps is The Carry, a tempera on hardboard panel painting completed in 2003 when Wyeth was 86 years old.

Andrew Wyeth is the middle figure in three generations of the famous Wyeth family of artists.

His father was Newell Convers Wyeth, known as N.C. Wyeth (1882-1945), whose early illustrations for the 1911 edition of Treasure Island are among his best known works. A 2001 34¢ stamp in the American Illustrators stamp set reproduces his painting of Captain Bill Bones from the Robert Louis Stevenson book (Scott 3502r).

Andrew Wyeth’s son James (Jamie) Wyeth also is an artist. He was born in 1946, and in many of his works he continues the realist traditions of his father and grandfather. Jamie’s 1967 portrait of President John F. Kennedy is the illustration for a 28-penny Ireland commemorative stamp issued in 1988 (Scott 729).

Andrew Wyeth was home-schooled as a child and learned about painting from his famous father. He excelled in both landscapes and portraiture, and achieved early success while still in his 20s.

From 1966 to 1967, Wyeth was a member of the Citizens’ Stamp Advisory Committee, which selects and commissions art and subject matter for United States stamps.

Jamie Wyeth joined the stamp committee in 1969 when he was 23 and served for almost a decade. In 1971, Jamie Wyeth’s design of a partridge in a pear tree appeared on an 8¢ Christmas stamp (Scott 1445).

In a 1987 book titled Andrew Wyeth: The Helga Pictures, art expert John Wilmerding, then deputy director of the National Gallery of Art, wrote of the artist: “As a painter in the American tradition he has embraced its central currents of realism as a style and landscape as a subject; as an expression of the twentieth century, his art bears its own witness to our age’s sense of anxiety, introspection, and isolation.”

In the same book, Wyeth is quoted as remarking: “Art, to me, is seeing. I think you have got to use your eyes as well as your emotion, and one without the other just doesn’t work.”

Wyeth received the Presidential Freedom Award from President Kennedy in 1963. He died in Chadds Ford at age 91 on Jan. 16, 2009.

Technical details and first-day cancel ordering information for the Andrew Wyeth stamps are presented below.

Standard ordering instructions apply. Collectors requesting first-day cancels are encouraged to purchase their own stamps and affix them to envelopes. The first-day cover envelopes should be addressed for return (a removable label may be used), and mailed in a larger envelope addressed to FDOI — Andrew Wyeth Stamps, USPS Stamp Fulfillment Services, 8300 NE Underground Drive, Suite 300, Kansas City, MO 64144-9900. Requests for first-day cancels must be postmarked by Sept. 12.

The Postal Service’s set of 12 uncacheted first-day covers for the Andrew Wyeth stamps is item 475016 at $11.16. USPS order numbers for stamps and FDCs also appear in Linn’s 2017 U.S. Stamp Program.