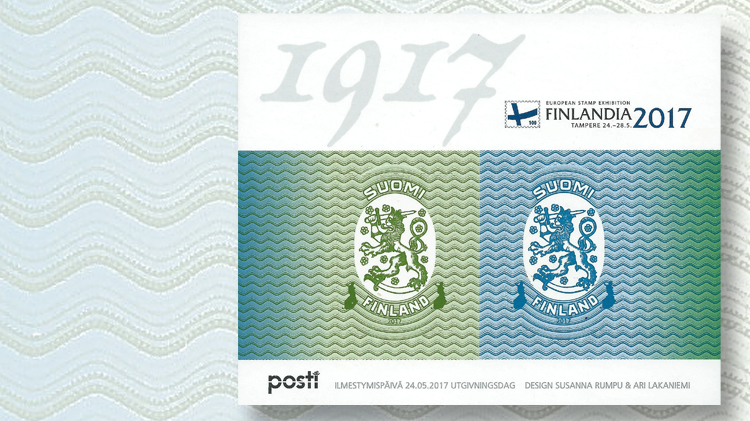 This Finnish souvenir sheet for the May 24-28 Finlandia stamp show and exhibition was readily available at less than $3. A different sheet from 1998, newly surcharged, became an instant rarity.

Finlandia 2017 in the city of Tampere was in many ways part of the celebrations marking Finland’s centenary as an independent nation.

The stamp show and exhibition was held May 24-28 at Tampere Hall, a complex featuring various concert halls and the Moomin Museum.

The exhibition occupied four floors of the building. This made it somewhat difficult to locate the various exhibition rooms and some of the participating dealers and philatelic services.

However, it very much looked like a world exhibition, with exhibitors from all parts of the world including the United States. The quality of the exhibits was extremely high and numerous large gold medals were awarded.

A large gold also was awarded to U.S. collector Gregory Frantz for his exhibit “Steamship Companies and their Stamps.” It contained most of the rarities in this particular area, including a number of very rare Finnish stamps and covers.

Another U.S. collector exhibited duck stamps. Will Csasplar was awarded a gold for “A License and Stamp System for Waterfowl Conservation in the 20th Century.”

Faberge (1876-1951) was a famous Russian philatelist who spent the latter part of his life in Finland. He amassed huge collections of Russia, Russian Levant, and Finland, but he is particularly well known for his collections of Zemstvo stamps.

The book was awarded a large gold. Fortunately it is entirely in English, because Finnish is quite different from most other languages.

Posti, the Finnish postal service, had released a number of stamps in connection with the show. A souvenir sheet with two NVI (no value indicator, or nondenominated) stamps sold at face value, €2.60 (about $2.92).

A very limited number of remaining quantities had been surcharged with the current inland first-class rate. It seems Posti wanted to create an instant rarity.

Finlandia 2017 was well attended and hugely successful (except, perhaps, for some of the dealers who were far from pleased with the location of their stands).