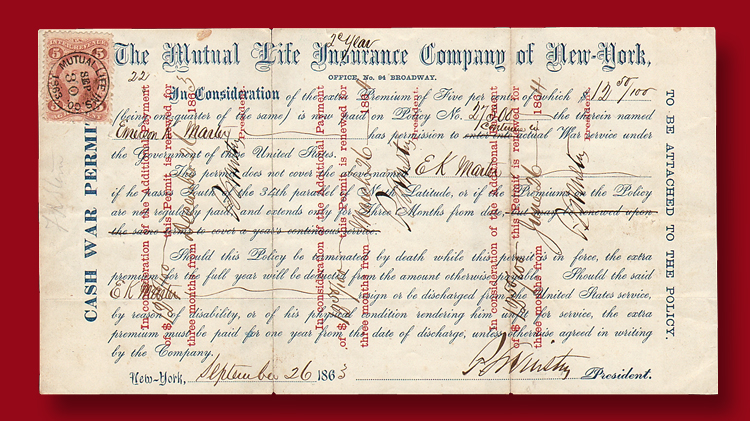 A cash war permit of the Mutual Life Insurance Co. of New York from September 1863.

The Aug. 6 issue of Linn’s Stamp News just landed on the presses and goes in the mail to subscribers Monday, July 23. And if you subscribe to Linn’s digital edition, you’re at the head of the line with early access Saturday, July 21. Here are three stories you'll want to check out.

Shown above is a cash war permit of the Mutual Life Insurance Co. of New York, made Sept. 26, 1863. This was a rider attached to a life insurance policy stating, “In consideration of the extra Premium of Five per cent … Emerson K. Marter has permission to continue in actual War service under the Government of these United States.” A proviso on the cash war permit reads, “This permit does not cover the above mentioned E. K. Marter if he passes South of the 34th parallel of North Latitude …”

What does this mean? U.S. Civil War Era Fiscal History columnist Michael Mahler has the story.

What is the story behind the little numbers (called coil counting numbers) on the back of Swiss stamps? Swiss Stamp Scene writer Richard T. Hall explains the history and how to collect from this area.