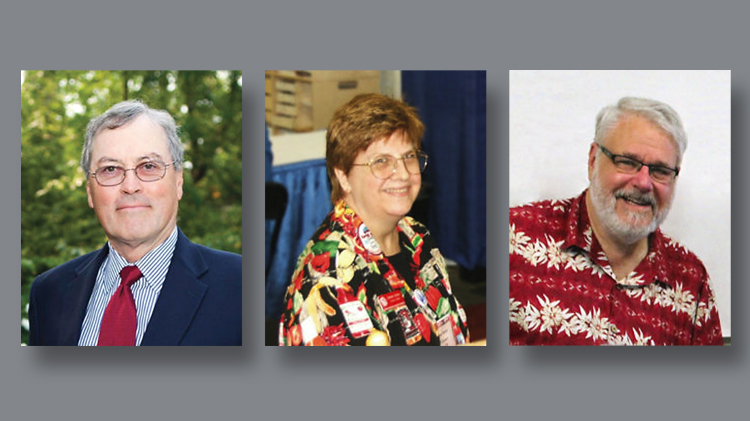 The American Philatelic Society will present the Luff awards for 2018 to John H. Barwis for philatelic research, Denise L. Stotts for contributions to philately, and Wayne L. Youngblood for service to the APS. The awards are presented annually for meritor

The American Philatelic Society has announced the recipients of its 2018 Luff awards. The prestigious award is presented annually in different categories for meritorious contributions to philately by living collectors.

The award presentation will take place Aug. 11 at the celebration banquet being held as part of the Aug. 9-12 APS Stampshow in Columbus, Ohio. Tickets for that dinner can be reserved online.

Barwis co-founded and serves as president of the Institute of Analytical Philately, the organization that offers research grants and holds symposia. These conferences have been held in conjunction with the Smithsonian’s National Postal Museum, the Royal Philatelic Society London, and the Chicagopex stamp show.

Using scientific equipment, his cutting-edge examination of the shades, papers and inks of the U.S. Banknote stamps was landmark.

Barwis wrote and maintains a database of date ranges for postmarks used on Philadelphia foreign mails. He has compiled sailing tables for the monthly packets between Philadelphia and Liverpool from 1822 to 1875 by using newspaper archives in the United States and Great Britain.

A stamp collector for 59 years, his exhibits have won national and international gold medals, as well as grand awards in the United States and Great Britain. He won the 2011 Champion of Champions competition.

He is a fellow of the Royal Philatelic Society London and past president of the U.S. Philatelic Classics Society.

Stotts has been an active and tireless philatelic leader and volunteer at the national, state and local level for more than 25 years.

A lifelong philatelist, she served as director-at-large for the APS from 2007 to 2011. She has also served on the society’s chapter activities, ethics and election review committees, the Young Philatelic Leaders Fellowship advisory board, and as local committee chair for APS Ameristamp Expo 1998.

Stotts has been on the Garfield Perry March Party show committee since 1988 and was the show chair for the Greater Houston Expo from 1994 through 2016. She also was a director for the Texas Philatelic Association and Houston Philatelic Society.

She was a founding member of two organizations: the American Association of Philatelic Exhibitors, and Women Exhibitors. She also is a gold medal award-winning philatelic exhibitor.

Youngblood is a lifelong stamp collector, who began collecting at age 8 and never stopped.

He has served three terms on the APS board as director-at-large and two terms as secretary. He has served as an expert for the American Philatelic Expertizing Service since 1990. Also, he has been an APS Summer Seminar instructor all but one year since 1990.

Youngblood is the current editor for numerous philatelic journals, including the American Stamp Dealer & Collector magazine, the Collectors Club Philatelist, Topical Time and Duck Tracks. He also is a columnist for Linn’s Stamp News and Philatelic Exporter.

He began his professional involvement with the hobby as a staff writer for Linn’s in 1987.

He later was editor of Scott Stamp Monthly, editor-publisher of Stamp Collector, and, more recently, was vice president at Regency-Superior Auctions.