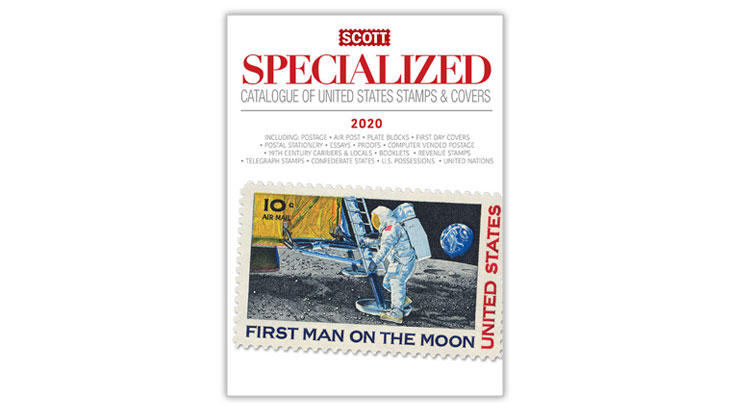 Many important value and editorial changes enhance the 98th edition of the Scott Specialized Catalogue of United States Stamps and Covers.

Before we turn our attention to specific examples, we salute Scott editor emeritus James E. Kloetzel for working tirelessly on the thousands of value changes and hundreds of editorial changes. Kloetzel and the rest of the Scott editors have been busy adding and expanding listings and making significant improvements throughout the catalog.

From Scott 1, the 1847 5¢ red brown Benjamin Franklin stamp, through No. 771, the last listing for the 1935 special printings, there were slightly more value changes than normally seen.

Overall, however, the trend is neutral with few significant increases or decreases in values.

The values for the Columbia SCADTA consular overprints should be studied closely. It has been clarified that the catalog values are for stamps and covers that are very fine examples without the tropicalized perforations or spotting that is often found.

Modern stamped envelopes properly used in the time period of validity of the issued denominations (which is what Scott values reflect) are becoming extremely hard to find, and the catalog values for many of these used envelopes are rising, often significantly.

For example, the 2001 34¢ Community Colleges Centennial envelope (Scott U648) was previously valued at 40¢ for a used entire. The new catalog value is $2.

The values for such modern commemorative stamped envelopes might continue to rise.

For collectors who have been waiting to buy large die proofs of the private die proprietary stamps, we are afraid that the ship has sailed. Values increase about 20 percent across the board for Scott ROTC1a through RU16P1.

Editorial enhancements in the 2020 U.S. Specialized catalog are prolific.

The second special feature provides details about the new on-cover listings for the Kansas-Nebraska overprint issues of 1929 (Scott 658-679).

A significant number of new essays were added to the catalog, and approximately 100 images of essays have been updated from black-and-white to color thanks to Mike Farrell and William M. Dugan Jr.

Collectors of essays will also be happy to know that the 1869 safety paper essays have been renumbered in a way that makes sense, including the addition of one type that was not previously noted. Thanks to Scott Trepel and John Zuckerman of Robert A. Siegel Auction Galleries for the excellent research behind these changes.

Long-delayed listings of Christmas seals for the years 1980 to 2018 have been added. I encourage you to look at this section closely. Values for early errors, covers and earliest documented uses also were added, as were new early major varieties.

The number of new postal counterfeits discovered since the 2019 Scott U.S. Specialized catalog was published comes as no surprise, considering their prevalence in different online marketplaces. If you want to distinguish between the counterfeits and their genuine versions, this section in the 2020 catalog is the reference tool for you.

To purchase the 2020 Scott catalogs, contact your favorite dealer, or call Amos Media at 800-572-6885. Also visit the Amos Advantage website. Digital editions of the Scott catalogs also are available for online ordering.