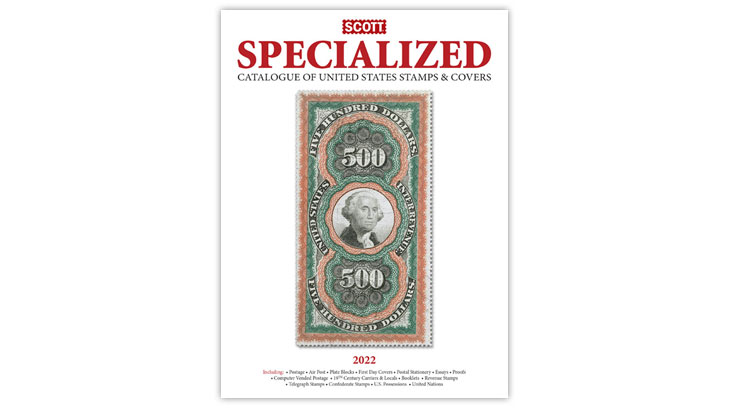 Many important value and editorial changes enhance the historic 100th edition of the Scott Specialized Catalogue of United States Stamps and Covers. Before we turn our attention to specific examples, we salute Scott editor emeritus James E. Kloetzel for working tirelessly on the thousands of value changes and hundreds of editorial changes. Kloetzel and the rest of the Scott editors have been busy adding and expanding listings and making significant improvements throughout the catalog.

There were somewhat more value changes for U.S. stamps than there were in the 2021 edition. Strong online sales during the past year have shown values to be well maintained for most areas of the catalog, with considerable strength shown in 20th-century issues.

Similar strength also was noticed for se-tenant stamp issues of the past 10 years. Once the initial dealer supply of some issues dried up, the values increased. In some cases, the catalog value is many times over face value.

In the 20th century, there are numerous stamps, mostly unused, that advance in value, including Scott 328-330, many Washington-Franklin coils, and 548-550. A big winner is the 2¢ coil pair of 1908 perforated horizontally (321), which rockets from $600,000 unused last year to $1 million in the 2022 U.S. Specialized catalog. This pair is fine-very fine, the highest grade known for Scott 321, and it appears to be the finest pair known of this very difficult issue.

Back-of-the-book values are holding firm, and values that change are overwhelmingly small increases. The exception seems to be modern federal duck stamps that netted some strong gains in the past year.

In the Essays section, many value increases are seen, plus quite a number of essays that had been valued with a dash in 2021 now have values assigned. There is a similar pattern in the Proofs section. There are many value changes in the Post Office Seals section because these seals were reviewed thoroughly for 2022. Most value changes are small to large increases, with a few decreases.

Two outstanding auction sales of encased postage were conducted in 2021, resulting in many more value changes in this section than is usual. Some modest decreases in values resulted, but there were many more small to very large increases.

The error stamp market continues to be quite active, and a number of values were updated on this front.

A great many important editorial improvements have been made in the 2022 U.S. Specialized catalog. New, high-quality images are seen almost everywhere in the listings. Almost every postage issue from 1995 to date is pictured now.

Two sections that were previously in the Scott U.S. Specialized have been removed. As a separate book, the identifier of definitive issues makes it easier for collectors to not have to flip back and forth between sections. The Scott Stamp Values section was previously a separate publication and is returning to that format.

Five new or corrected dates have been introduced for earliest-documented uses, and many footnotes have been added, clarified or expanded to make understanding the listings and values even clearer.

Many inquiries concerning values of full panes are received each year by the Scott catalog editors. We have started adding those values to the catalog and have completed that project for postage issues from the mid-1970s to date.

A special feature article by Dan Undersander appears in the Stamped Envelopes and Wrappers section of this catalog. The article focuses on modern U.S. envelopes that have received new minor listings because of design quality differences.

Another special feature article, by Gregg Greenwald, is in the Narcotic Tax Stamps section. The listings for these stamps have been enhanced after further research resulted in the discovery of new varieties that have been hidden in plain sight for years.

In the Official Stamps section, the seven printings on double paper have been upgraded to lettered minors to match the treatment of such interesting and important printings in the Large Bank Note listings of 1873.

The Essays section received an extensive review this year. The interesting history of Scott 212 essays greatly expands and corrects previous listings, with much more information and many more images shown. The Rev. Stephen Knapp is the authority on these essays, and his special feature article should not be missed.

The Post Office Seals section has undergone a thorough review, with considerable work done by advisor Bill Barlow. Special attention was paid to the OX and LOX numbers, with new minor listings for blocks of four, panes and covers added, and new and improved explanatory notes. Of special interest is the discovery and addition of a new Sea Post seal (Scott OXSP2). This New York-Hamburg seal completes the two-stamp set with the previously listed New York-Bremen seal (OXSP1).

Many new test stamps were discovered during the past year, and these are now listed in the 2022 U.S. Specialized catalog. The discovery of new test stamps has become a regular occurrence in recent years.

Copies of the best-selling 2022 Scott Catalogue US Specialized are available on AmosAdvantage.com in both print and digital formats.