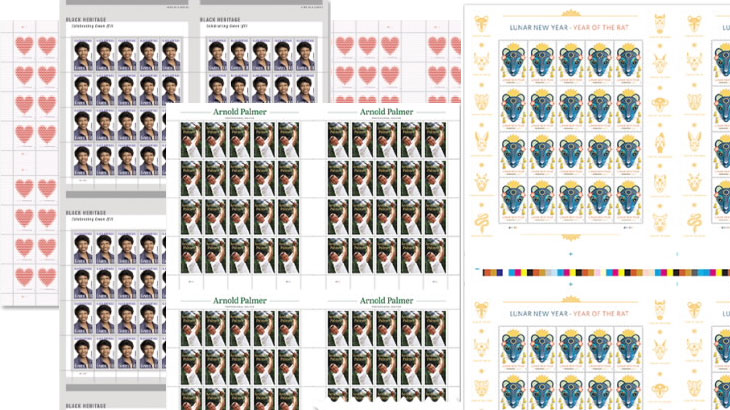 Press sheets of United States stamps are created from the large sheets of multiple stamp panes as they come off the printing presses.

All press sheets of United States stamps issued so far this year have been taken off the U.S. Postal Service’s online Postal Store.

USPS spokesman Roy Betts told Linn’s Stamp News that sales of the press sheets have been very strong and “quantities are now at a point where we cannot offer them online.”

The U.S. stamp press sheets are created from the large sheets of multiple stamp panes as they come off the printing presses. The press sheet for the Year of the Rat forever stamp issued Jan. 11, for example, consists of four attached panes of 20 stamps and sells for $44.

The press sheets that were issued but that are now off the retail site are for these forever stamp issues: Year of the Rat, Love Made of Hearts (Jan. 23), Gwen Ifill (Jan. 30) and Arnold Palmer (March 4).

“Based on sales of previous statehood stamps a decision was made not to produce press sheets for Maine Statehood,” Betts said. The Maine Statehood forever stamp was issued March 15.

The most recent issue for which a press sheet is still being offered on the Postal Store site is the set of four Spooky Silhouettes forever stamps issued Oct. 11, 2019. The press sheet consists of eight panes of 20 and sells for $88.