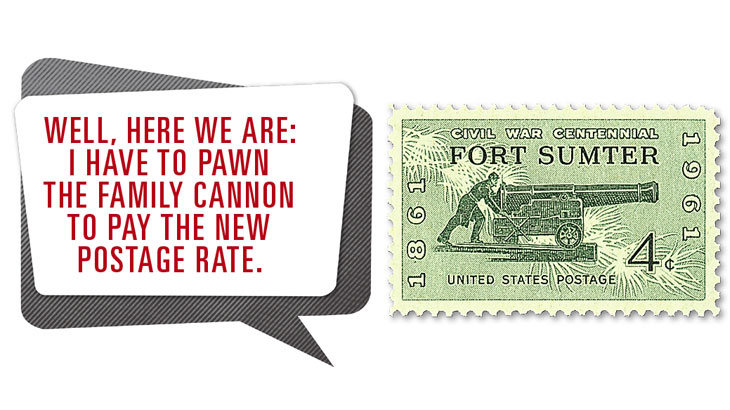 The winner of the philatelic part of the April cartoon caption contest featuring the 1961 4¢ Fort Sumter commemorative in the Civil War Centennial issue is Matthew Bowers of Texarkana, Texas, who reflects on yet another postal rate increase. The next U.S.

Delivering the mail was the most common theme for the April cartoon caption contest featuring the 1961 4¢ Fort Sumter commemorative (Scott 1178) in the Civil War Centennial issue.

James T. Smith of Etowah, N.C., represents this group with “Using these cannons to shoot mail to ships at sea is hit or miss, and way too noisy!”

A different philatelic use of the cannon inspired other readers. “This new canceller seems like overkill, but I’m sure the stamps will never be re-used,” was sent by Larry Rosenblum of Sunnyvale, Calif.

Russian President Vladimir Putin and Ukraine received a fair amount of attention in the entries. Arriving first was this entry from Scott Murphy of Henderson, Nev., “Which way to the Russian front?”

The latest in the series of rapidly increasing postal rates was the launching pad for the winner of the best philatelic line, Matthew Bowers of Texarkana, Texas. His line is shown in the box on page 10.

On the nonphilatelic side of the contest, the winner is Alex Kaplan of Naples, Fla., who suggests, “So, my neighbors said they didn’t want to hear any firecrackers on July 4th! I’ll show them … heh! heh! heh!”

“What do you mean you left the cannonballs at camp!?” by Edgar Dunlap of Gainesville, Ga.

“Lesson learned: Next time I join up, it’ll be the infantry and a rifle for me,” from Richard O’Brien of North Mankato, Minn.

“Why did they have to put a mailbox in the middle of this course?” from David Cohen of Rockville, Md.

“Darn hearing aids. Thought you said you were sending me away For the Summer, not to Fort Sumter,” by Steve Kotler, of San Francisco, Calif.

“This seems like a lot of trouble for a bowl of puffed rice,” sent by Joe Kowalski of Waupun, Wis.

“Re-coil? No problem; this is a sheet stamp!” from Steve Patrick of Apopka, Fla.

“You had to shoot your big mouth off. Now look what you’ve started!” from Scott Machol of Lakewood, Ohio.

Thanks and a tip of the hat to all who entered. The next contest will be announced in the June 13 issue of Linn’s.

Elvis in the spotlight for May cartoon caption contest