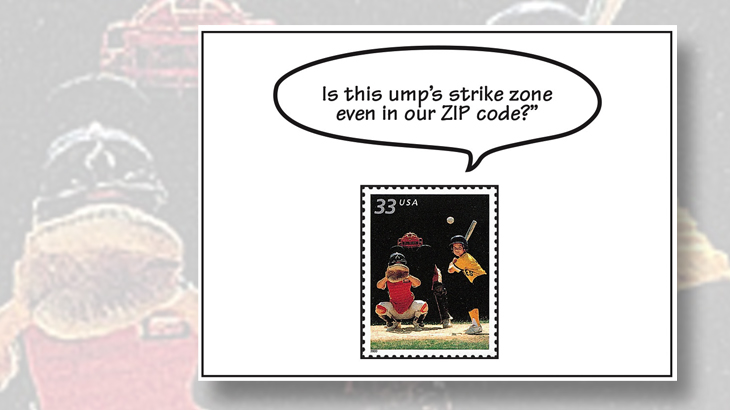 Second guessing the umpire is one of the many activities a baseball fan enjoys. Terry Meier of Tampa, Fla., wins the philatelic line for the April cartoon caption contest featuring the 33¢ Baseball stamp from the Youth Team Sports block of four by tapping into that vein. The next cartoon caption contest will be announced in Linn’s June 13 issue.

As a native New Yorker, I have been a New York Yankees fan since I was 5, and began to pick up my father’s interests (including stamp collecting).

Through the years, I have always had a brighter outlook on spring and summer when the Yankees were playing .666 baseball. And that is exactly what they are doing as this is being written — unfortunately that is their losing percentage, not what they are winning!

So because baseball is a bit depressing for me this year, I looked to the April cartoon contest entries to perk me up. The contest featured the 33¢ Baseball stamp (Scott 3402) from the Youth Team Sports issue of 2000.

Many of the entries mixed the scene depicted on the stamp with philatelic terms, such as this one from Norman Rushefsky of Silver Spring, Md., “I better bail out of the batters’ box or I’ll be perforated!”

Another group of entries merged the illustrated baseball game with the political follies of this year’s presidential election. Stewart Lyons of Woodmere, N.Y., had one of the players on the stamp commenting, “Our presidential candidates should have listened to my mother, ‘Remember to work and play well with each other!’ ”

Hitting one out of the park for a home run was the takeoff point for several entries. According to David Palladino of Peabody Mass., the batter is saying, “I’m going to put my stamp on this ball and airmail it over the fence.”

The nonphilatelic winner from Bradley Miller of Huntsville, Ala., comes from the political headlines, with the batter saying, “That Donnie Trump keeps trying to brush me off the plate, but I’ll show him not to mess with Teddy Cruz!”

The winner in the philatelic line part of the contest comes from Terry Meier of Tampa, Fla., who plays off a favorite activity of all baseball fans: second-guessing the umpire.

The catcher is thinking, “I’d better keep my glove up. I just got my braces off!” from Mildred Barylski of Warrenton, Va.

“Odd rule — Players cannot block the plate, but they can collect plate blocks,” by Ted Steinberg of Williamsville, N.Y.

“Mmm, those hot dogs smell good. Hope I strike out so I can get a couple,” sent by Ron Breznay of Hanover Township, Pa.

“Hmmm … If we play the Italian Little League team, and the ref gets up and then gets knocked down again, would that be, ‘The Rise and Fall of the Roman Umpire?’ ” from Steve Kotler of San Francisco, Calif.

Thanks and a tip of the hat to all who entered. The next cartoon caption contest will be announced in the June 13 issue of Linn’s.