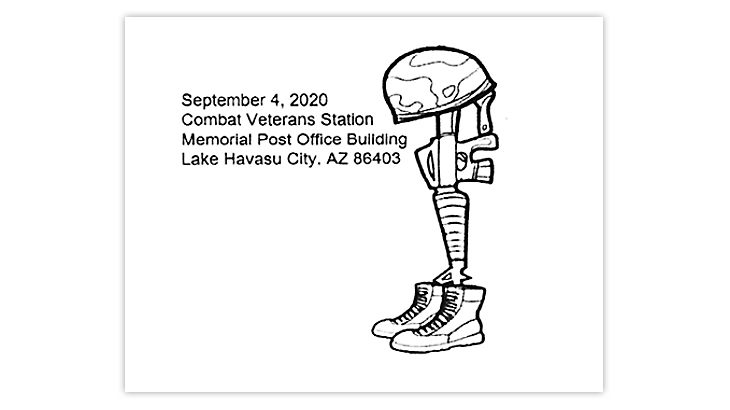 This Sept. 4 postmark is a tribute to Lake Havasu City’s fallen soldiers.

The post office in Lake Havasu City, Ariz. has been renamed to honor the brave local veterans who died in combat, and the pictorial postmark shown here commemorates the occasion.

The bill was sponsored in the House by Arizona Congressman Paul A. Gosar.

“America can never truly repay the debt to our fallen men and women in uniform,” Gosar said in a statement. “My hope is that renaming this post office as the Lake Havasu City Combat Veterans Memorial Post Office will serve as a reminder to all that our freedom is not free.”

The new moniker salutes the six Lake Havasu City men who lost their lives defending the United States. In 1968 Carey Dean Harmon was the first soldier from the area to lose his life in Vietnam. Helicopter pilot Scott Broadston also died in Vietnam during a combat assault in 1970.

Patrick Tinnell gave his life in 2006 during the war on terror in Siniyah, Iraq. Tinnell’s mother, Debbie Tinnell, is Lake Havasu City’s postmaster.

Anthony Sausto lost his life fighting in Baghdad, Iraq, in 2007, and Dylan Reid perished in Amarah, Iraq, in 2010. Sweden-born Carl Hammar moved to Lake Havasu during high school; he died in Afghanistan in 2012.

The name switch was made official in early September 2020 with a dedication ceremony that included Gosar, Mayor Cal Sheehy and other city council members.