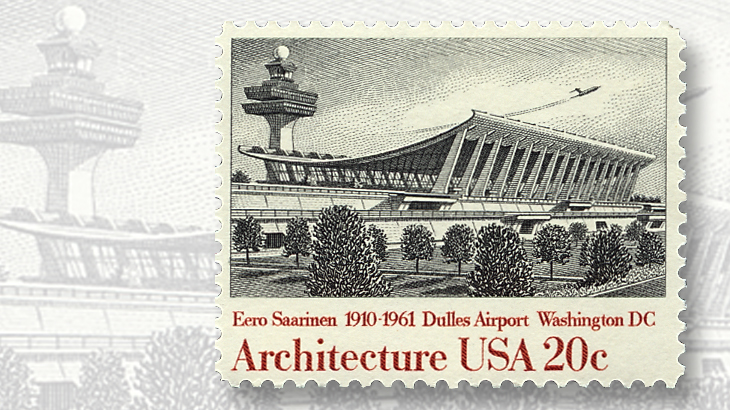 Finnish-born architect Eero Saarinen is honored on a 20¢ stamp from 1982 showing the Dulles Airport terminal building he designed.

Architect Eero Saarinen was born Aug. 20, 1910, in Kirkkonummi, Finland. He was the son of another famous architect, Eliel Saarinen, who was also born on Aug. 20, but in the year 1873.

The son, Eero Saarinen, was honored on a United States 20¢ stamp issued Sept. 30, 1982. This stamp shows the terminal building he designed for Dulles Airport outside Washington, D.C., and includes his name in the inscription (Scott 2022). The stamp is part of the fourth and final set of American Architecture series commemoratives.

Other structures by Eero Saarinen have been featured on U.S. stamps.

The 2005 Modern American Architecture set includes a 37¢ TWA Terminal New York stamp (Scott 3910d). Saarinen is named as the architect in text printed on the back of the liner paper.

And the Gateway Arch was commemorated again in 2006 as part of the 39¢ Wonders of America set of 40 stamps, featured as the tallest man-made monument (Scott 4044).

Eero Saarinen studied sculpture in Paris and architecture at Yale University. He became a naturalized American citizen in 1940, and died in 1961.