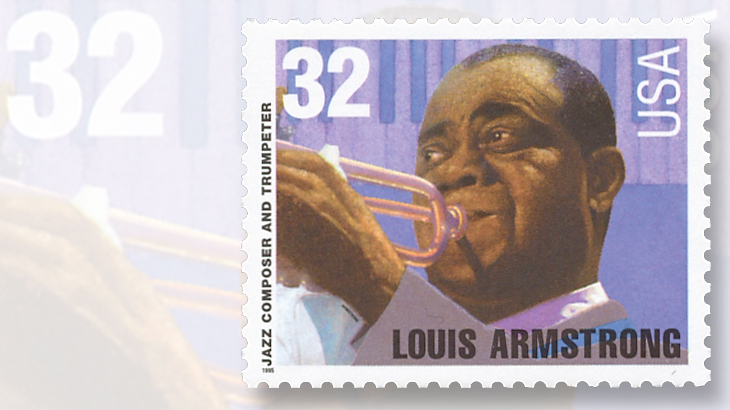 Jazz musician Louis Armstrong, honored on a 32¢ stamp issued in 1995.

In its press release announcing the new issues, the Postal Service wrote, “Louis Armstrong learned to play the cornet and bugle at the Waif’s Home in New Orleans where he had been sent by juvenile court when he was about 11 years old. At 17, he joined Edward ‘Kid’ Ory’s New Orleans band, replacing his mentor Joseph ‘King’ Oliver.”

Over the course of his lengthy career, Armstrong became a key influence in the development of jazz music, a hugely popular recording artist, a concert favorite and a popular icon recognized internationally on television and in films.

Among his most famous compositions are Potato Head Blues, Swing That Music and Wild Man Blues (with Jelly Roll Morton).

His many hit recordings include the songs Hello Dolly and What a Wonderful World.

The second variety, with the denomination printed in black, was issued Sept. 16, 1995, as part of a set of 10 commemorating jazz composers and musicians (Scott 2984).