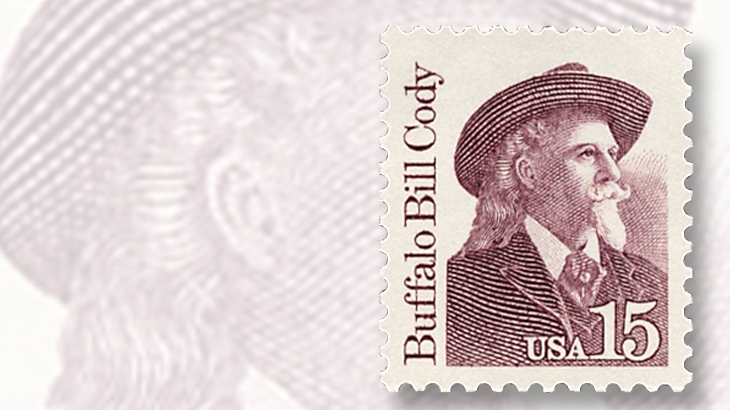 Buffalo Bill Cody, the legendary frontiersman and entertainer, was honored on a 15¢ stamp in 1988.

Born William Frederick Cody in LeClaire, Iowa, on Feb. 25, 1846, the man known as Buffalo Bill became a legend of the American West as a gold miner, Army Scout, buffalo hunter, and flamboyant entertainer.

Cody enlisted in the Seventh Kansas Volunteer Cavalry at age 15 and fought in Civil War battles. For his later service as Chief of Scouts for the U.S. Army during the Indian Wars, Cody was awarded the Medal of Honor in 1872.

A friend named Ned Buntline romanticized Cody’s adventures in a series of dime novels; coupled with Cody’s participation in a Western theater production, his reputation as the adventurer Buffalo Bill spread across the nation.

Cody organized a traveling exhibition and took his Wild West Show around the world, enthralling audiences with cowboys and Indians, horsemen and sharpshooters, including the astounding sure-shot Annie Oakley.