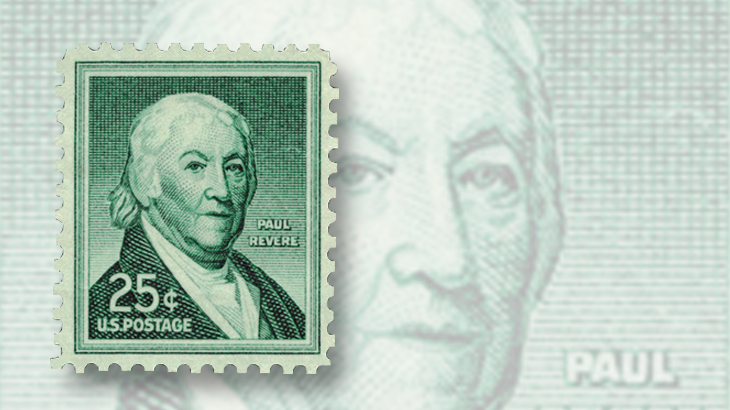 A 25¢ definitive stamp in the Liberty series honors patriot Paul Revere. The stamp was issued in 1958.

American patriot, folk hero and silversmith Paul Revere was born Jan. 1, 1735, in Boston, Mass. His father, a Huguenot refugee named Apollos Rivoire, was a silversmith who changed the family name before his son was born.

Paul Revere was an apprentice silversmith at 13. In his early 20s, he served in the Army during the French and Indian War, and then assumed responsibility for his late father’s silversmith business.

Revere took an active part in revolutionary activities in Boston to thwart British domination. In 1773, he participated in the Boston Tea Party with Samuel Adams, and he also served as a horseback courier for Boston’s patriotic Committee for Safety.

His most famous ride took place April 18, 1775. American patriots in Boston learned that British troops had been dispatched to arrest Adams and John Hancock in nearby Lexington, and to destroy colonists’ supplies in Concord.

With a prearranged signal in the Old North Church warning that the British troops were approaching by water, Revere and William Dawes set off separately late at night to alert Adams and Hancock, as well as colonists in Concord and along the way.

Revere later served during the Revolutionary War, and then resumed his work as an artisan and businessman. He branched out as an engraver and store owner, and cast cannons and bells in bronze. Revere died in 1818 at age 83.

A 24¢ stamp issued Nov. 14, 1975, in the Americana definitive series shows the Old North Church and the signal of lights warning the patriots on the night of Revere’s famous ride. (Scott 1603).

In 2007, a 39¢ commemorative stamp honoring Henry Wadsworth Longfellow (Scott 4124) showed an image of Revere on horseback. Longfellow popularized the story with his 1860 poem, Paul Revere’s Ride.